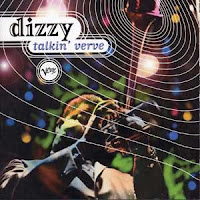 I've been listening to a lot of Miles lately, specifically early '50s Miles;  I've been trying to start filling in the (huge) gaps in my Miles collection, and I started by looking at the sort of fallow period between the Birth of the Cool sides and the Coltrane quintet.  Anyway, then I pulled this out and listened to it.

Man, it's refreshing to come to Dizzy after Miles.  I love Miles - I always come back to him - but I can't listen to him too much, and hearing Dizzy this morning made me realize why.  Miles is all psychodrama.  At its most basic his technical - well, sometimes they're physical limitations, sometimes they're a by-product of his style, but anyway, there's always the question of, will he hit the note?  What note was he trying to hit?  But it's not just that, of course:  there's an emotional pinchedness, a mental tension, to his playing.  That's the essence of his style, of course, and at his best he mined it for a complexity, an abstraction, that brought his music to the highest pitch of art.  But it can be tiring, too, and sometimes frankly a little constricting.

Dizzy's always good for your soul.  There's a generosity in his playing, an ebullience, that somehow seems all the more striking because of his incredible technical virtuosity.  Like, he can do all that, effortlessly, and he will do all that for the pleasure of his listeners.  I understand why that stance might have seemed unsatisfying to some listeners at one time;  I think it's easy to hear some of Louis Armstrong's hokum side in Dizzy's Caribbean scatting, and certainly some of Louis's basic stance toward audiences in Dizzy's openness to entertainment.  I understand why that might have dismayed listeners looking for a more brazenly ambitious artist.  And for them there's always Miles - and for me too.  But damn if I don't enjoy Dizzy.

This is a good disc, too.  It draws on records he made for Verve, Limelight, and Philips between 1957 and 1966 - and he was pretty prolific in that timespan - and it concentrates on the funky and exotic sides of his work.  We get his original studio version of "Swing Low Sweet Cadillac," for example (and here he is later doing it with Muppets), and the even more jungley "Jambo."  But there's also the deeply bluesy "Theme From Cool World," which out Horace Silvers Horace Silver.  And we get some of his excellent, out of time big band work:  a long meaty track from Gillespiana, and another movement from Lalo Schifrin's The New Continent.  It's really groovy Dizzy, in other words, while never being anything less than total jazz.
Posted by Tanuki at 9:56 PM