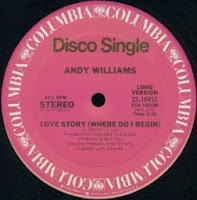 More roborative disco.  Andy Williams, of all people, and yes my parents had a few of his records, right there with Roger Whittaker and Neil Diamond, turns in a Virgilian epic of a performance on this nearly ten-minute 1979 remix (or rerecording? nobody seems to know) of his 1971 hit.  It's so toweringly good that it leaves you wondering why more crooners didn't get into the disco game.  (Probably they did, and the Tanuki just doesn't know it.)

Williams' old-world dramatic sense seems made for disco, turning bel canto at just the right moments, and the arrangement is pretty genius, too.  Some bits are clearly borrowed from better-known tracks.  But that timpani solo:  that's something I hadn't heard before.

If this doesn't heal you a little bit, maybe you aren't sick enough.
Posted by Tanuki at 11:32 PM No comments: