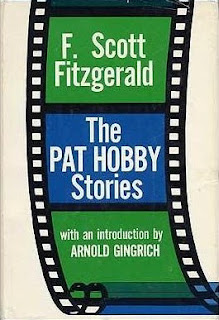 A series of short-short stories FSF published in Esquire starting the year before he died and running until after his death, collected in 1962. They're set in Hollywood and center around a hack scenario writer, a washed-up relic of the silent age.

As Hollywood stories they're the obvious counterpart to The Love of the Last Tycoon, and they're a nice counterpoint to that work, too.  Whereas the novel dealt with success, these stories deal with failure;  the hero of the novel was still in his prime professionally if not emotionally, a man of his age, while Hobby is over the hill in every way.

The temptation is to read these stories autobiographically, mapping Fitzgerald's own Hollywood malaise and post-Tender Is the Night literary irrelevance onto Hobby.  I don't know enough to say whether that reading is right or wrong, but I will note that Hobby isn't a mirror image of Fitzgerald.

In later decades the Fitzgerald type, the literary writer who goes to Hollywood and fails even to become a hack screenwriter, would become a trope of its own, but that's not what Fitzgerald is giving us here.  Hobby isn't a genius with words who finds Hollywood's debasing of words beneath him;  he's a "writer" who started his career in a period when "writing" for the films wasn't really writing, when it was a matter of slapping together story clichés and a few intertitles.  It's the new Hollywood, the one that values and requires words, that Hobby can't deal with, and in fact the few real writers that Hobby encounters, the obvious analogs for Fitzgerald, seem to be succeeding pretty well.  What I'm saying is that if Hobby does represent Fitzgerald's own sense of failure, then Fitzgerald has objectified that in a determined way, so that the parallels aren't completely obvious.  Hobby is less a comment on the passé writer than he is on the transition from silents to talkies and what it might have felt like to be middle-aged at that time.

That's where I think the sense of failure comes in, or rather Fitzgerald's empathy with failure.  Hobby's a guy whose talents are obsolete, whose tastes and joys are superannuated, whose indulgence that once seemed heroic now seem tawdry.  He's middle aged, in other words, and his failure is that of every middle-aged guy.  Right?  He's 49 when these stories take place, which makes him a few years older than FSF was when he wrote them, but no doubt the author could see himself going there.

Are they great stories?  I don't know about that.  I didn't laugh, but they kept me amused.  They didn't move me deeply, but they rang true.  And I'm always interested in literary explorations of failure, of decline.  It rings true...
Posted by Tanuki at 9:14 AM No comments: