Things just keep getting tougher and tougher for Easy Rawlins. And that, my brothers and sisters, seems to be the point.

So, coming to the first book in this series from the film, I was most enthralled by the setting, and the hero: postwar black LA, full of promise, streets mean but still sunstruck, perfect stomping grounds for a hero full of pride and a sense of accomplishment. Ezekiel Rawlins helped defeat the Nazis: surely there was a place for him in the city of angels. And as embodied by Denzel Washington, that confidence shone through: it never blinded Easy to the realities of life in Watts, but it let him master them.

When I opened the second book and found the story jumping forward five years, I was disappointed, most of all because I felt there was much more to be explored and savored in that moment, and in Rawlins as 1948 found him.

Each book so far in the series makes that jump: five years forward for A Red Death, three more years for White Butterfly, and five years again for Black Betty. By now it's pretty clear to me what Mosley is trying to do: he's not content to create a black PI in a perfect noir world. He's out for nothing less than a dissection of the death of the postwar dream for black folk.

It's a painful read, at times; I have a hard time imagining Denzel playing the Easy Rawlins of Black Betty. I'm sure he could, but: the point is, Rawlins by this point is not the smooth, quiet, confident man of thirteen years before, but a man who has seen so much cruelty and malice in the eyes of white LA that he's barely hanging on. And he's angry, eloquently angry: in his internal monologues he pulls no punches in his diagnoses of what's happening to blacks in America, even as Martin Luther King is marching. The Easy Rawlins series started out concerned with a moment of promise; by this point it's clear that it's about broken promises. About betrayal.

And Easy Rawlins is still there.

Of course, these books aren't entirely about Rawlins getting the shit pounded out of him by white cops. There's also sex. More precisely, there's desire.

That theme comes through strongest in this book, and that's part of why I think it's my favorite so far. The title character doesn't appear in the narrative present until the end of the book - Rawlins's job is to find her. But she lives in the descriptions of various characters Rawlins meets, and in his own memories - he knew her as a child in Houston, when she was carnality incarnate.

What Mosley is doing here, I'm guessing, is tapping into an African American archetype every bit as potent as that of Stagger Lee. Black Betty, in Leadbelly's song, is almost an empty signifier - a name, an image, an alliteration, a rhythm, and a series of suggestive, enigmatic commands - "run yonder," "jump steady," "turn around." Could be about a prison train, a whiskey bottle, a gun, or a woman. Could be, but isn't: of course it's about a woman. With a name like that.

Rawlins's search for Black Betty takes on a mythic power, and so when he finally finds her, and has to break her heart, sees her collapsed, helpless, weeping, it just tears the reader up inside.

Yeah, Ram Jam's 1977 version of it is pretty archetypal, too. It rocks. It must be dealt with.
Posted by Tanuki at 6:28 PM No comments: 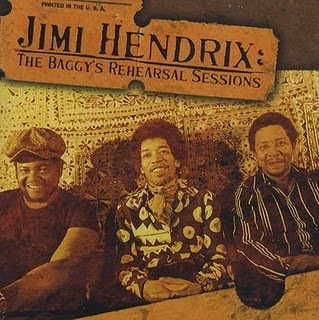 This was one of the earlier Dagger Records releases; I only got around to it recently. Basically that's because I always figured, how good could rehearsals be? And these didn't seem to have too good a reputation.

I was wrong. It's one of the more satisfying Hendrix releases of its decade.

It draws from the 12/18-19/69 rehearsals for the New Year's 1970 gigs at the Fillmore East by the Band of Gypsys. Those gigs have been pretty thoroughly explored on disc; in addition, quite a few tracks cut by this lineup in the studio have been released. As a result there's nothing here that can't be heard elsewhere, except for the jazzy "Baggy's Jam," which isn't the most memorable part of the disc.

But as far as I can tell, most of what's here sounds better here than elsewhere. The best example is "Message To Love." It's a little slower than the more familiar versions, which turns out to enhance the groove. And since this was recorded live to two-track, nobody could mix the backing vocals too low, as is the case on other versions. Here they're right up front, emphasizing the ragged soul underpinnings of Jimi's music in this period. It sounds, in other words, like a band performance, like three friends making music together. That it all collapses at the end into a bunch of Pigmeat Markham and Moms Mabley impressions just makes it that much more fun. All this and jokes, too.
Posted by Tanuki at 11:26 PM No comments: 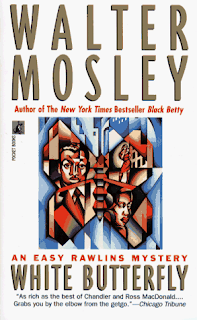 White Butterfly is the third book in Walter Mosley's Easy Rawlins series. We keep jumping forward five years at a time: this one takes place in 1956, and I just started the fourth book and know that it's 1961 there. Mosley has a program, evidently.

Rawlins is growing in interesting ways. As a narrator, by this stage his ruminations on race relations pull no punches whatsoever, to the point that I at first felt they were a bit too on-the-nose, subtextually speaking. But that's not the best way to think about it: rather, this is a voice Mosley's developing, a consciousness, and why wouldn't he be conscious of the times he's living in and what's driving them?

What we've got in Easy Rawlins by this point is the man who, in Dylan's formulation, is trying to "live outside the law," and who therefore "must be honest." Fair enough - Rawlins does try to live by his own code of honor - but what's also true of the black man trying to live outside the law in 1956 Los Angeles, according to Mosley, is that he must keep himself hidden, and keep himself protected.

Hiding is the theme of this particular installment: not only is the murder he's investigating all about a girl assuming a false identity, but the problems in Rawlins' own life stem from his inability to reveal himself, in all his dimensions, to his wife. Rawlins is a rich man in this book, a property owner - he's living the dream - except that he can't let anybody, not even his wife, know what he owns. The only way to make it work is if he almost completely effaces himself. Invisible Man territory, right?

The protection comes, as it does in the first two books, in the person of Easy's friend from Houston, Raymond Alexander, "Mouse." Here in the third book I finally come to understand Mouse, as a character. He's violent, unpredictable, a good man in a fight, but all too likely to bring that fight to you. He's also full of lust for life, and so full of pride that you just know he'll never back down from anybody.

He is, to give him another name, Stagger Lee. Mosley is, I'm convinced (and I'm a bit embarrassed that it took me three books to figure it out), giving the Stagger Lee myth yet another lease on life with Mouse. How does he fit in? Rawlins hates Mouse as much as he loves him: hates his hair-trigger temper, and his lack of qualms about murder. Wishes he could survive without resort to his violence: but he can't. Mouse is the only way Rawlins can survive outside the law: Mouse is essential. And since living inside the law is an unbearable humiliation...

Again, on one level it's standard private-eye stuff, the knight errant flirting with darker forces. But on another level it's a pattern that comes from deep within African-American cultural traditions. These are serious books.
Posted by Tanuki at 8:49 AM No comments: