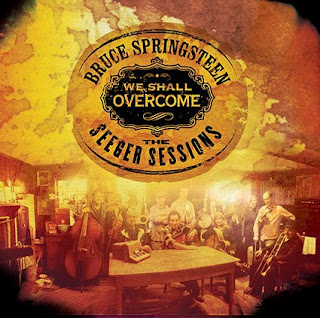 Sometimes I come to the party late. Like, right now I'm listening to Bruce Springsteen's Seeger Sessions album for the first time. Wondering what I was doing in 2006 not listening to it then.

It's clearly a major work. There's probably nobody else in the world who could have done this. Lots of singers could have sung these songs; a few, like Dylan (I count four songs on here that Dylan's also sung, with a couple-three more he's sung distant cousins of) could have sung these songs with a similar level of virtuosity and understanding; but nobody could have brought the grand old-fashioned mass-audience populism like Bruce, and that's part and parcel of the impact of this album. Anybody else, and you'd have figured they were just singing to the NPR set. Bruce's reach includes them, but is wider.

I'm part of the generation that grew up thinking of Bruce Springsteen as the Voice of the Working Class. Thing is, that's bullshit. Before he was the Voice of the Working Class, Bruce was an artist, and like all artists, he chafes at his community as much as he revels in it. Bruce the Artist wants to record what he wants to record. If that's stuff like "41 Shots," so be it. But his community, that same Working Class, will punish him if he does. So he has to follow it up with stuff like The Rising. He wants to do his introspective solo stuff, but he's learned he has to intersperse this with big E Street Band projects. He can't quite leave the old neighborhood gang behind.

The Seeger thing is, to my mind, his most daring and desperate gesture in that direction. I'm too much of a Dylan fan, too much of a fan of that moment at Newport '65 that (apocryphally, at least) provoked Pete to swing his axe, to really have much use for Pete Seeger, I'm afraid, but these aren't really Pete Seeger's songs anyway. They're folk songs, goddammit, and that's how Bruce sings them. I mean, he sings "Jesse James" as if it's 1882 and he expects his audience to be hanging on every word because they want to find out what happened to Jesse, and to Robert Ford, and why. He sings "Mrs. McGrath" as if he expects those damn blue collar tweekers to actually pick up the anti-war message. Or listen to this album. Or forgive him for making a tribute to a pinko like Seeger.

In short, this album is perhaps the greatest act of faith in the American people in Springsteen's long career.