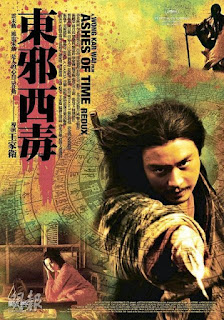 Caveats:  I've never seen the predux version of this, nor do I qualify as even a casual fan of wuxia stuff.  I saw Crouching Tiger, Hidden Dragon, and I liked it, and that probably tells you enough.  (But, hey! My date was from Beijing!  And she liked it too!)

All that said, I loved this movie.  So much that I came away thinking that maybe Wong Kar-Wai should just make nothing but wuxia films from here on out.

Not that it was particularly effective as a wuxia film, I imagine.  I mean, it was hard to follow the story (easier the second time through, though), hard to tell some of the characters apart (that works thematically, though), and hard to follow some of the action sequences.  If I was watching it to get my swordplay kicks, I would probably be frustrated.

But as a visual spectacle it's unmatched, and I think that's in large part because the wuxia genre gives Wong and Doyle unlimited room to indulge in visual splendor.  They make use of nature here in a way that they simply don't in their other films:  the desert's strangely rainbow hues, the moody skies, the dramatic perspectives offered by distant horizons.  Then, too, there are the colors and textures available in medieval costume and not in modern.  But above all there's the imperative to show action - which in this case allows for an experimentation with representing movement and bodies in space that Wong's other films only hint at.

What this movie is, I think, is a example of what wuxia films, and their analogues in other cultures (samurai flix in Japan, medieval fantasy in the US), have to offer a serious filmmaker and his viewers.  A serious representation of the past it's not, but as a piece of pure film, it's beautiful.

So what I'm saying is that, storywise, this film is unsatisfying, but the visuals make up for it.  Wait - isn't that kind of the opposite of what I've been saying about the last few Wong Kar-Wai films I've written about?  That for me, ultimately, great visuals don't make up for an unsatisfying story?

Yep.  It's the opposite, alright.

So maybe what I mean is that the fact that this is a wuxia film allows the story to make sense even when it doesn't make sense.  You know each of the subsections is leading up to some kind of showdown, and even if you don't quite understand the stakes, you can follow the emotional tension-and-release without much trouble, and that frees up your mind to appreciate the visuals for their own sake.  The film is borrowing some unearned narrative coherence from the genre (and it works even if you don't know much about the genre).
Posted by Tanuki at 1:56 AM No comments: