Or, Notes for a Skeptical Deiography of Eric Clapton (i.e., We Don't Believe He's God, but His Story Is Worth Telling Anyway), #1.4.

This Jimmy Reed number was the third track laid down at the December 10, 1963 session that produced "Boom Boom" and "Honey In Your Hips."  To be honest, I'm not sure when it was first released;  I first heard it on Crossroads.

The Jimmy Reed version is utterly typical of him.  It stumbles (it actually sounds like it's stumbling) into a shambolic groove that's nevertheless sturdy enough to rock it steady to the end of the record.  The vocals sound phoned in, in that utterly charming, disarming way Reed had.

The Yardbirds' version is pretty typical of them at this point - meaning it kind of splits the difference between the tentativeness of "Boom Boom" and the assuredness of "Honey In Your Hips."  Rhythmically they tighten up Reed's record predictably but effectively;  this actually cooks pretty nicely.  Clapton's guitar work outshines Reed's - he actually peels off a solo here, while Reed only gestures toward one.  As is often the case on these early records, it's Clapton's chordwork before and after the solo that dazzles more than the single-string picking, but it's all pretty tasty.

It's not necessarily blues, you know?  Relf sounds like a snotty prep-school boy, but the arrangement is so peppy, yet so unaggressive, that it neuters any aggression his vocal might have contained.  And he doesn't play harp on this one, leaving Clapton's snappy guitar lines to shape the record entirely.

Not a bad trio of recordings for their first time in a studio.
Posted by Tanuki at 7:03 PM No comments:

Yeah, but this one still might be my favorite. 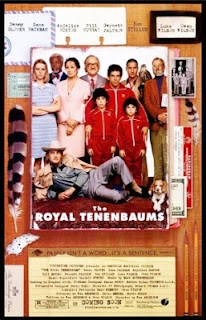 Clothes.  Have I talked about clothes in Wes Anderson's films?  In this one, for example, above and beyond their typical role in expressing Wes Anderson's timeless/mid-to-late-20th-century aesthetic by kaleidoscoping four or five decades into one, the clothes are meaningful.

They're obviously meaningful in one way.  The clothes the younger Tenenbaums-and-fellow-travelers wear are obvious indices to their warped characters.  Chas's gauche track suit indicates how thoroughly the death of his wife has thrown his life off track;  he's traded in the business suit he's worn since, virtually, birth for garb that expresses a perpetual state of alarm, of expecting the worst.  That it's the same uniform he dresses his kids in underscores his own forgone childhood, come back to bite him now.  Meanwhile Margot's ensembles, it's made clear, are the same ones (or unreasonably close facsimiles thereof) she was wearing at age 12, indicating that she's never grown up (the opposite of Chas, who never had a childhood - and therefore, in his own way, never grew out of one).  Richie's attire is the most absurd, wearing his tennis clothes under a horrible beige suit (the exact color all the boys in my church were wearing in 1980), unmistakeably indicating that he's stuck between life as a tennis player and life as an ordinary guy.  Eli's outfits are the funniest and most pathetic, of course;  he's the foppish urban cowboy tout court.

So, yeah, the clothes reflect character that way.  But let's not forget the other thing about them:  they're hideous.  The younger Tenenbaums, uniformly, have awful taste in clothes.  And this, I believe, isn't just an expression of directorial quirkiness.  Because look at how well Royal dresses.  He favors Lawrence Welk hues, but he rocks them.  He always looks fabulous.  And so does Etheline, in her Jackie O suits.