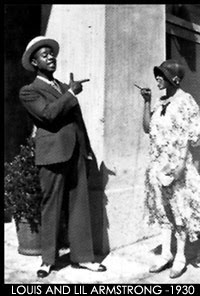 I've been listening to a lot of Louis Armstrong the last few weeks. I've had the complete Hot Fives and Sevens for a couple of years on a set from Proper UK called King Louis, but I actually never got past the first disc, which had selections from Louis with King Oliver, Fletcher Henderson, and a bunch of blues singers. The sessions with the blues singers, especially, were so awesome it took me a couple of years to want to go any farther. Some things you just want to savor.

Anyway, I've jumped into the Hot Fives and Sevens with both feet now, and holy mother of pearl, they're just as good as everybody's been saying for seventy years.

The one I'm big on tonight is this one from 1926: "Georgia Grind." Not one of the more celebrated sides, I guess (the Terry Teachout bio of Armstrong I'm reading now doesn't call it out for any comment). Undoubtedly that's because Louis doesn't really step out and solo on his horn, just plays over the intro and outro. But there's still a lot to love about it. Starting, I'll point out, with Louis's wife Lil Hardin Armstrong, whose piano and vocals dominate the first half of the record.

Lil gets a bad rap from every single critic I've read. And even I can hear that her piano playing is a bit stiff and hesitant compared to Louis's playing. But it works nicely as a foil for him, and she gets off some nice licks here and there (not on this record, however). Mostly she's there for rhythm - they couldn't use drums on these early records because they were recorded without a mike. And rhythm she provides.

Here we get to hear her sing. I gather her singing isn't adored by critics either, but I'm enthralled. There's something about her delivery - a clarity and innocence that evoke her educated background, together with a gleeful abandon that suggest a good girl gone bad and loving it. Kind of the epitome of the '20s for me. Again, she's a great foil for Louis, whose vocal (technically much better than hers, but not trying to outshine her, just answer her) suggests the opposite, a bad boy pretending to be oh so good. Or something like that.

I guess this falls into the category of hokum...
Posted by Tanuki at 1:18 AM No comments: 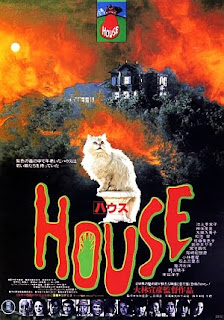 Managed to see this on the big screen a couple of weeks ago: House (Hausu ハウス), 1977, dir. Ôbayashi Nobuhiko 大林宣彦. I've actually seen another of Ôbayashi's films, although I wasn't sure it was his until I got home and checked Wikipedia - I keep my brain on the internet. The one I'd seen was Beijing Watermelon (北京的西瓜) from 1989, a film that should be far better known.

That one is about a greengrocer in Tokyo who befriends some Chinese exchange students. Befriends them in spite of himself, and at a key point in time. It's 1989, and they're some of the first students to come to Japan after the Cultural Revolution, right before Tienanmen Square (part of the generation talked about in Yang Yi's A-Prize winner). Our greengrocer becomes so close to these students that he decides to go visit them in Beijing - but then the Incident happens. And in the movie, something really cool happens: the protagonist breaks the fourth wall and tells the audience that because they couldn't go to Beijing to film (wink wink) they're just going to pretend. So they make do with a minimalist set for the final scenes - thus bringing home the shock of the crackdown quite forcefully.

I've always loved this film, and knowing nothing about the director I'd always seen that surrealistic ending as an improvised response to difficult circumstances. Now that I've seen House, I'm not so sure. House is all surrealism, all the time: more experimental filming, editing, lighting, animation, special effects, acting, and everything else than I've ever seen in one movie. And it's all in the service of this gloriously trashy teen horror-comedy. It's the MTV-overkill style before the birth of MTV; it might just be the best movie ever made. And, incidentally, it shows that the director had quite a deep bag of tricks. The interesting thing about Beijing Watermelon, it turns out, isn't that he went surreal at the end: it's that he restrained himself to one trick, deployed at one key moment.

Back to House. Mrs. Sgt. T and I had a long discussion afterward over whether this film is ironic or innocent. It was late at night, so I won't vouch for it having been a very coherent discussion, and I can't reproduce it all here. The gist, I think, was that she pointed out (after I'd raved about this movie's sui generis awesomeness), quite rightly, that it's got a lot of Rocky Horror in it. And I said right, but where as there's something jaundiced and ironic-unto-death about Rocky Horror (a movie I love, I hasten to add: Mrs. Sgt. T and I saw it together very early in our relationship), whereas House is all innocence and gonzo freshness - despite being sort of a nudie flick, among everything else. And she pointed out that maybe there's a lot of cynicism to House that maybe I just can't recognize because it's not my milieu (the Oregon prof who introduced the film pointed out that it's full of product placement, far more than usual for 1977, but I'm not familiar enough with 1977 Japanese consumer culture to have been able to spot any). Innocence may be in the eye of the beholder.

She may be right. So I don't know if this film is innocence or experience. But it feels incredibly fresh, and that's true even if you've seen a lot of Japanese films. There's nothing else quite like it. I had a smile on my face from the first frame to the last, except when my mouth was hanging open.
Posted by Tanuki at 11:47 PM No comments: