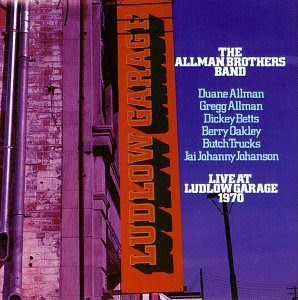 "We don't do this song very much but I feel like singing, so I guess... that's what we're gonna do."

So sez Duane, with that matter-of-fact confidence that marked the early Allmans. Then we hear an organ chord by Greg, then Duane counts it off, and then, boom boom boom boom.

"Dimples" was a John Lee Hooker song from 1956. Here's his version. By the time the Allman Brothers got around to doing it, the Animals had also put their stamp on it; you can hear a clip of their version here. Given their British Invasion fetish, I'm sure the Allmans knew the Animals' version too, but their rendition doesn't sound much like what Burdon and company did. It's John Lee all the way for the Allmans.

The Allmans' version comes from an April 11, 1970 show in Cincinnati released in 1990 as Live At Ludlow Garage 1970; before the full show was released, this track was a highlight of the band's Dreams box in 1989. The Ludlow Garage show was the first of the Allmans' archival releases; it's a great show, in decent audio quality - a few more wobbles and warbles and drop-outs and whatever than you usually find in official mass-market releases, so don't listen to it on headphones, but it's a great show, and it's the only source for them doing this song. They never released a studio version, and haven't yet released another live rendition.

The Allmans' version is, like all Duane-era Allmans stuff, pretty damn satisfying. Duane's vocals are serviceable - he's no John Lee, but he's more credible than Eric Burdon, at least. He's good enough to get us through the verses, so we can get to the instrumental stuff. Which is where the action is.

We start off (after that intro and countdown) with a classic Allmans twin-guitar figure. This one just reaches right out of the speakers and grabs you by the neck. Duane and Dickey both sound real dirty on this track, just like they should, and after the first vocal section they trade short but nasty solos. Then check out their unison lines after the second verse, where they transform the neck-grabbing riff they started out with, taking it new places, but still in lock-step with each other. This is the Allmans sound, this is what we love: Duane on top, a little louder, Dickey a little lower, here with a little throatier sound.

After this bit the band brings it to an end, right around the point Hooker's original ends. But it's a trick, one of their favorite ones: they end it (and listen to Berry's bass fills as they wind it down), only to swing right back into the song for another three minutes or so. (It's a perfect little "now look here" metaphor for what the Allmans were up to: reverent and reasonably faithful versions of blues songs, but then with a whole lot of other good stuff added on.)

Now we get the real solos: Duane laying down some wailing blues licks, just completely mastering his domain, then Dickey responding with some desperado-sounding howls of his own. As usual with his early solos, at some points here he seems to be thinking out what he'd later do on "Rambling Man" and its ilk.

And underneath it all there's the rest of the band: Greg's soulful organ work, lending the whole thing a patina of jazz cool, Berry's supple bass, alternating between grinding the groove out and tripling the guitar lines, and the drummers. The Allmans didn't really employ their two drummers to polyrhythm things up like the Dead did; instead they use Butch and Jaimoe to double down on the groove. The result is unfailingly solid swing - that's the only real word for it - the Allmans in their prime could swing, like Basie's band, or the Duke's.

After a mere five minutes they end it: pretty concise for the Allmans. Duane has the last word: "You got dimples!" he says, bemusedly. And indeed we do.
Posted by Tanuki at 11:15 AM No comments:

I've got lots of ideas for blog entries stored up, but they're kind of logjammed at the moment, and all that's coming through is a little trickle of water, with maybe some wood chips or debris floating in it...

Anyway, you may remember a little aside I wrote about my attitudes, Then and Now, toward critics. Roger Ebert, whose work I've valued for a long time, just posted a new essay defending what critics do. Highly recommended.

(Although, I'm not as optimistic as he is about Rissient's dictum that "It is not enough to like a film. One must like it for the right reasons." Maybe Rissient was simply trying to tell us, as Ebert suggests, that "the unexamined life is not worth living;" but I have no doubt that a lot of the people who live by Rissient's words, if not the man himself, do have a bit of the cultural snob in them. If Rissient really meant what Ebert wants to think he meant, wouldn't he have just said "one must like it for a reason"?)
Posted by Tanuki at 4:52 AM No comments: