We were in New Haven for a couple of days this week, and I went to the Yale Center for British Art.

I'm not an Anglophile.  At least, I don't consider myself one.  In fact when I was younger I had arguments with Americans who I thought were too Anglophilic - childish arguments, to be sure, but the point is that although I don't consider myself a cultural nationalist neither do I have a thing for British culture for its own sake.  That said, I do like my share of UK bands, writers, films, etc.  And over the last decade or so I've developed a real love for 18th and 19th century British painters. 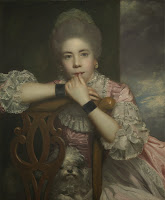 I don't think I realized quite what a love it was until I spent the afternoon at this gallery, though.  I'm not sure I can quite explain it, either.  I can explain my love for old portraiture in general - a good portrait that really captures the personality of the sitter is the best way I know to connect across the centuries, to feel common humanity from a remote age.  But why British portraits of that period, more than American?  More than French?  More than Dutch?  (Well, maybe not more than Dutch.)  I
have to think about this more.

So since I haven't thought about it enough I'll just link to a couple of masterpieces I saw and tell you why I loved them.

One is a painting that I think most viewers would agree is a masterpiece:  Reynolds's "Mrs. Abington as Miss Prue."  Reynolds makes her look utterly dreamy, yet completely conscious of her charm - you expect her to say something bawdy, or just to wink, at any moment.  She's so young, and so alive. 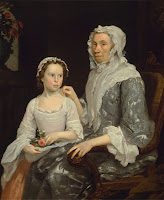 The other is one that perhaps a lot of viewers would pass by:  George Beare's "Portrait of an Elderly Lady and a Girl."  Certainly it lacks the perfection of the Reynolds.  Mrs. Sgt. T once taught me that most portraitists used generic bodies and only had the subjects pose for the face, and you can really see it in the old woman's body and arms, which so utterly fail to match her face.  But that face - so unabashedly aged, so unglamorous, so real.  And the granddaughter, fresh-faced but a little awkward, a little bored.  Again:  real.

Is it connection that I feel?  Is it the conviction that, unlike the subjects of French or Dutch portraits, if I somehow met these people I could speak with them and understand what they said?  An illusion, of course, but a powerful one.  And yet they're British, and I'm not, right?  Does this mean that I don't feel American?  That I don't think there's a distinction between British and American culture, either in the 18th century or now?  Would I have been a Tory in '76?  Do I agree with the Booker Prize being thrown open to Americans?
Posted by Tanuki at 8:32 PM 1 comment: