This one I had on a compilation; I liked it, so I bought a whole disc of Menescal. Great stuff.

Take, for example, "Amanhecendo," from 1964. The Conjunto here is Menescal on tasteful electric guitar, a drummer, a pianist, a flutist, a bassist, and a vibraphonist. It's a mid-tempo number, a pleasant melody that alternates between guitar/vibe and flute/piano duet lines; this seems to be something Menescal likes, with each pair of instruments blending so perfectly to create a new and distinct sound. Then we get a piano solo: brief but energetic, really stirs things up. Then a mellow guitar solo takes us into the fade-out, with jazzy piano chords hanging in the background. It's the piano that really makes this record, whether it's comping interestingly behind the guitar/vibe lines or doubling the flute, and that solo.

Or, for another example, "A Morte de um Deus de Sal," also from 1964, also with the Conjunto. Different album, I think, so it may be a different lineup. Same instrumentation, though, except Menescal's on acoustic guitar this time. A very different song, this. A slow, foreboding, almost bluesy (in a jazz sense) bass line starts it off, doubled immediately by the piano, and then the percussionist comes in, with a skittering, tense little rhythm; can't tell if it's a really schizoid 4/4 or a swinging little 6/8 for a while. Again we have the instrumental overlay, this time it's flute, vibraphones, and piano; it's a really cool effect, combining the sustain of the flute with the attack of the vibes and piano. Again the thing climaxes with a jazz-inflected energetic solo, but this time it's the vibes that go crazy. Then we get a flute/piano doubled solo to ease us down.

(Unfortunately the solos don't show up in the samples on the riverine webmerchant's site, so you'll have to take my word for all this...)
Posted by Tanuki at 8:28 PM No comments: 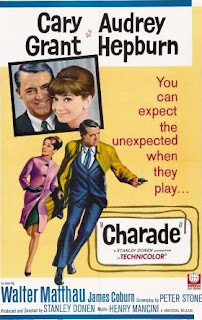 And if that don't bring a smile to your face you might be dead.

Watched this with Mrs. Sgt. Tanuki this evening; part of Christmas with Audrey. This one of my favorite movies. Hepburn at her best, Grant at his best, both effortlessly charming, and with so much chemistry that you forget he was twenty-five years older than her. This is snappy dialogue, Hollywood pizzazz, star power.

As the Wikipedia entry says, it's the best Hitchcock movie Hitchcock never made; it does have that tight, suspenseful plotting, but of course it doesn't have the darkness that you usually find in even the lightest of Hitchcock's films. It has its melancholy moments, though - and they're surprisingly moody for such a frothy film. Hepburn standing forlorn in her empty Paris apartment, or sitting on the veranda of the ski lodge dressed in black and contemplating divorce.

These of course are more than balanced by the humor - Grant showering in his suit ("drip dry," he says) and making faces at Hepburn - and the real sexual tension Hepburn and Grant generate. As I say, this is Hepburn at her most irresistible, her patented balance of womanly sensuality and girlish cuteness; I think she does it here better than she does it in Breakfast at Tiffany's even.

All this plus a Henry Mancini score and Maurice Binder titles. What more can you ask for?
Posted by Tanuki at 8:07 PM 1 comment:

Peter Bogdanovich's They All Laughed 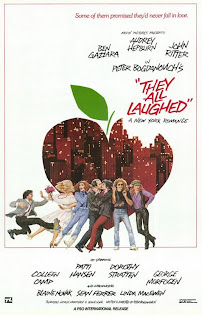 So we ended up with a copy of this on DVD this Christmas. Santa brought Mrs. Sgt. Tanuki a bunch of Audrey Hepburn movies, because Mrs. Sgt. Tanuki loves Audrey Hepburn; mostly they were classics like Charade, How To Steal A Million, Sabrina, My Fair Lady. But Santa Tanuki also found this one on a certain riverine webmerchant and got it. Knew nothing about it.

This is the first of Bogdanovich's films I've seen; somehow he's been a blind spot in my exploration of '70s cinema, and his Sopranos cameos are about all I know of his work. This is probably not the best one of his to start with - imagine One From The Heart being your first Coppola.

Enough preamble. This turned out to be a weird film, but I enjoyed it. It's trying to be a semi-screwball romantic comedy in the style of the classic ones Audrey Hepburn starred in in her prime, but with a thoroughly 1981 cast and vernacular. So, snappy dialogue, but delivered with spaciness rather than sparkle. Which sounds disastrous, right? But somehow it's not.

The thing this film lacks that something like, say, Roman Holiday or Charade had is focus. Those films were tightly centered around the story, even if it was a convoluted story; in classic Hollywood fashion every scene and every character supported the story. They All Laughed works in a different way: half the time you're really not sure what the story is, and every character seems to come from a different movie universe entirely. It's a New York romance with a country music soundtrack and private eyes that seem drawn equally from Bogey and Cheech & Chong; John Ritter doing his best Peter Sellers, a hard-boiled female taxi driver, Audrey Hepburn looking like Yoko Ono; Colleen Camp talking like Katharine Hepburn but singing like Joan Baez; frustrating pacing; precocious kids, roller skating, and did I mention lots of country music?

Despite that, and only if you surrender and take the movie on its own terms, it works. All the performances are good, entertaining, memorable, and the dialogue really does have a certain snappiness to it, if you can match its frequency. Some nice camera work (such as the series of shots when Ritter runs up and in to the courthouse; Wes Anderson notes this sequence, too, in his conversation with Bogdanovich on the DVD, so I'm not original here; but it is a nice sequence). You may not know what's going on half the time, but it's not an unpleasant feeling here.

As an Audrey Hepburn movie, on the other hand...let's just say Mrs. Sgt. Tanuki was disappointed.
Posted by Tanuki at 7:54 PM 1 comment:

I can't vouch for the video, but you can hear the record here. I'm talking about Tom Jobim's "Surfboard" as recorded in 1966 by Roberto Menescal.

I previously knew this song in a recording by Herbie Mann and Stereolab on the compilation Red Hot + Rio. Good set, good track, but...well, the lesson here is that if you're playing bossa nova, you really want your rhythm section to be Brazilian. A previous generation learned that with Jazz Samba, a good record that nevertheless paled next to some of Getz's later cracks at bossa nova, in large part because Charlie Byrd's rhythm section just didn't have the light touch bossa nova requires. Neither does Stereolab, I guess - whatever else they may have going for them.

But Menescal's Conjunto does.
Posted by Tanuki at 8:45 PM No comments:


So when the Tanuki was a kid he, like everybody else of his generation, was obsessive about catching the Christmas specials on TV every year. No VHS yet, don'cha know. If you missed them, or your babysitter made you go to bed too early, you were out of luck. We were religious about pulling the TV listings out of the newspaper every week, circling the specials, and marking them on the calendar.

One of my favorites was How The Grinch Stole Christmas. The Chuck Jones animated masterpiece, of course: we ignore the Jim Carrey monstrosity, and hope karma takes care of everybody involved in it. We had the Grinch book, too, of course, but we also had one other artifact that the Tanuki remembers quite fondly. Evidently he's not the only one, because at least two others have blogged about it. Yes, we had the lp of Zero Mostel reading the book.

Now, this was awesome. But what was even more awesome was Side Two of the record, which had some guy singing Christmas songs from around the world, just voice and acoustic guitar. I loved this side; as a kid, I'm sure I loved it, but then as a folk-revival-obsessed teenager I loved it more.

This year I finally tracked it down. Turns out it was taken from a 1957 Folkways elpee called Christmas Songs From Many Lands Sung In English By Alan Mills. Like most of the Folkways catalog, it hasn't been released on CD, but you can buy it in mp3 form from the Smithsonian/Folkways website. It's also on Amazon and iTunes.

The full elpee has about twice as many songs as were included (pirated? Folkways used to be fairly lax about copyright, I understand, and I wonder if anybody respected theirs) on the Grinch record, and it's well worth shelling out nine or ten bucks for, if you at all like folk musick. 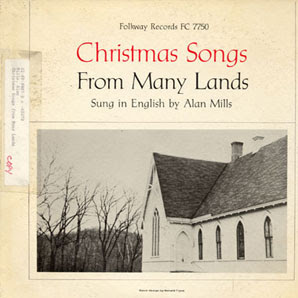 Mills is very much an early folk-revival kind of singer: impeccable diction, highly trained singing. Professional and classy. Everything that I, as a Dylan fanatic, have been schooled to hate in folk-revivalists. Ain't no mud, no bark, no husk on Alan Mills. And I probably would pass on it normally, but somehow his approach works perfectly for Christmas songs. The record sounds like a recital, not a hootenanny, and that's just fine. He's got a beautiful voice, with nice dark and mellow tones, and the folk-guitar accompaniment (by Gilbert Lacombe, not Mills himself) is nifty, nimble and tasteful.

The songs are well-selected, too: only a couple that are familiar to anybody but carol mavens. The rest are a nice mix of African-American spirituals, English ballads, and lesser-known European carols. Excellent renditions of the Greek "Saint Basil," the Russian "Kolyada," the Czech "Haidom-Haidom," the French "Bring A Torch." As you might expect from a folksinger of his generation, none sound especially "authentic," but they're all tuneful, enthusiastic, understated renditions. The perfect antidote to the schlock you hear over the mall muzak system this time of year.

A note: Folkways evidently made their mp3s from an old, battered vinyl copy of the record. You get fifty years worth of scratches and pops. A nice touch, actually.
Posted by Tanuki at 2:03 PM 1 comment: