Or, how to know when to stop reading?

I never set out to read all of F. Scott Fitzgerald.  Just most of him.  I naïvely thought (and, as a lit scholar myself, I really should have known better) that it would be fairly easy to identify the Fitzgerald Canon, and that's all I really wanted to read.  I seem to have read more than that, and that too has been rewarding:  "The Cruise of the Rolling Junk" seems pretty extra-canonical, but as I wrote, I think it's one of his most enjoyable things.

If I had set out to read everything, I'm not quite sure where I would have turned.  It seems there are a couple of ebooks out, just out, that contain the complete short stories and essays, and there is a complete-works scholarly edition finally coming out right now that presumably will eventually include all the short stories.  As it was, though, I think I was unconsciously figuring I'd read what's available in mass-market editions;  I'm really trying to figure out how American publishers curate and market American literature.  And on that score I've been mildly surprised and disappointed:  I figured at the very least Fitzgerald's original short-story collections would all be in print, but no.  And I figured the stuff uncollected in his lifetime might have been rationalized and made easily available.

But no, not really.  Up to this point I had read the pre-humous collections (Flappers and Philosophers. Tales of the Jazz Age, All the Sad Young Men, and Taps at Reveille), and then the posthumous collections that didn't seem to overlap with the pre-humous ones too much (The Basil and Josephine Stories, The Pat Hobby Stories, Bits of Paradise, Afternoon of an Author).  At that point I thought all that remained was The Price was High, at which I balked - even the subtitle of that one admits that it's scraping the bottom of the barrel.  Those can't be Canon, right?

But then I looked at Matthew Bruccoli's The Short Stories of F. Scott Fitzgerald, which seems to be the current best attempt to identify the Best of FSF's stories, and realized that it includes a few from The Price was High.  More alarming, it included a few that aren't in there, and also weren't in any of the others I'd read.  I ultimately realized that the previous best attempt at the Best of FSF's stories, Malcolm Cowley's 1951 The Stories of F. Scott Fitzgerald, which drew from both collected and uncollected, and the uncollected of which stayed largely uncollected elsewhere, even as the book itself was superseded.  Confusing.

Anyway, since I'm in the mood to move on from this author, I read the stories from the Bruccoli and Cowley volumes that I hadn't yet read - about fifteen in all.  I'll pass on The Price was High (although Mrs. Sgt. T, who knows me rather well, says she's sure I'll read it someday, because I'm just that compulsive).

It won't surprise anybody that these stories ended up being a mixed bag.  All of his collections are.  The Cowley volume includes at least a couple of gems:  "The Rough Crossing," about an intense few days on an ocean liner crossing the Atlantic, and the marital discord it shakes loose, is one;  "An Alcoholic Case," the most harrowing thing I've read by FSF about his alcoholism, is another.  The Bruccoli volume also includes some gems:  "Dice, Brassknuckles & Guitar" is as high-spirited and stylish as it sounds;  "More than Just a House" is another slightly pat relationship story, but any time FSF is honestly in touch with poverty it gets interesting;  and "The Lost Decade" (actually in the Cowley book too) is another intense short piece about alcoholism.

All of which is to say that I probably will find more gems in The Price was High when I get around to it.  Which in itself is another way of saying that I don't entirely agree with either Cowley's or Bruccoli's selections.  But if I had to recommend a one-volume selection of FSF stories, I'd probably say the Bruccoli is best.  However I still think the ones he published in his lifetime should be in print, and that's what you should reach for first.  See what he wanted to be remembered for, then read what he wanted forgotten.  He wasn't right, but he had the right to be wrong, and it's interesting to see how he exercised it.  I mean, it's worth realizing that, in 1935, he would rather preserve something as slight as "The Night of Chancellorsville" than "The Swimmers."
Posted by Tanuki at 12:59 AM No comments:

F. Scott Fitzgerald: The Cruise of the Rolling Junk

This is a three-part travelogue that was published in magazines in 1924, but not in book form until

2011. It's a mystery to me why it took so long, and why it's not better known.  As I've noted before, FSF's nonfiction just may be, with a few exceptions in either direction, where it's at.

Because I take it back:  this made me laugh.  Out loud.  At least a couple of times.  The idea is that it's a road trip, a true spur-of-the-moment, for-no-good-reason road trip of the type young Americans take:  Scott and Zelda wake up one morning in their Connecticut cottage and realize they need real Southern biscuits and peaches for breakfast, so they drive all the way to Alabama to get them.  In a car that's falling apart, through an America that's decades off from an interstate highway system.

I'm coming to realize that Fitzgerald's best characters were Zelda, the unflappable flapper, and F. Scott, the buffoonish author who thinks he's above it all, and in this book he plays those characters to the hilt.  It's sitcom stuff but it's great:  they have the devil-may-care attitude that leads them to think that money will buy them safety and comfort everywhere they go, but he also lets us see that in fact they don't have the money, and therefore they're in constant comic peril and real discomfort.  (Since they're driving through the South and Fitzgerald's a frightfully unself-conscious racist some of this peril is expressed in horrific terms, but.)

And most importantly, writing about his best and easiest subjects freed Fitzgerald up to make some really decent jokes.  It's all a natural performance, and quite witty.  A more or less random selection, from p. 65:


About the time we crossed the white chalk line which divides Virginia from North Carolina, we became aware that some sort of dispute was taking place in the interior of the car.  It began as a series of sullen mutters but soon the participants were involved in a noisy and metallic altercation.  I gathered that things were being thrown...

Silly cartoon humor: the white chalk line.  Situational humor: the sophisticate mystified by machinery.  Witty self-deprecating irony: the parts of the car at war with each other mirroring the marital disputes they in some measure give rise to.  Plus, wonderfully musical writing:  "sullen mutters," "metallic altercation."

One of his best.

His only full-length published play.  It's hard to judge it, of course, just by what's on the page, 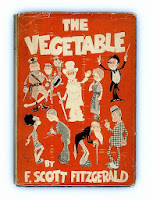 because the kind of comedy it was intended as is probably the kind that only comes to life on the stage.  Then again, he did publish it, so he must have intended it to have some kind of life beyond the stage.  But it doesn't:  it's dead on the page.

It's partly because it simply isn't funny.  Maybe it was funnier at the time - maybe the jokes haven't aged well - but I rather doubt it.  After all, the play bombed, and the book doesn't seem to have done much better...  The situations aren't particularly funny, the characters aren't particularly funny, and the dialogue isn't particularly witty.  It reads like the kind of thing that was screamingly funny when Fitzgerald and his friends concocted it - but the humor metabolized out along with the alcohol...  I've now read most of Fitzgerald (I'm a few volumes behind in my blogging, but I think I'm ready to say I've read enough now), and one thing I don't think he was, was funny.  There are smiles and smirks in his writing, but precious few actual laughs.  He's not that kind of writer.  He tries to be here - he thinks he is - but he's not.

But I could forgive that, actually.  Comedy often doesn't age well, and in fact comedy doesn't always have to provide laughs to be worthwhile.  There can be other things on offer.  What really sinks this book is that it puts the worst of Fitzgerald's social attitudes front and center.  The plot revolves around a shlubby Everyman for whom bootleg alcohol is the pillow of Kantan:  he dreams he's President.  The problem is that, rather than enjoying his success and then awakening to realize that all earthly glory is as transient as a dream, he screws everything up as President and then wakes up thankful that he's just a simple man after all.  In other words it's a profoundly antidemocratic work that laughs at little people for being little people, and tells them that they shouldn't aspire to great things, but should be content with their little stations in life.

If there is humor here, it's the snide laughter of the elite, aimed at shaming the plebes into remaining in their place.
Posted by Tanuki at 2:36 AM 2 comments: