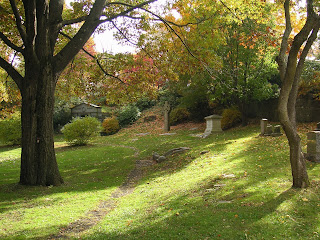 Is this art? Mrs. Sgt. Tanuki and I went on an outing last week to Mt. Auburn Cemetery here in Cambridge - it looked like it was the closest we were going to get this season to a serious leaf-peeping excursion.

It's an interesting place. First garden-style cemetery in the States (as opposed to the earlier churchyard-style cemeteries), and a pioneer in landscaping, precursor of the great urban parks of the 19th century, such as Central Park, or the Tanuki's favorite, St. Louis's Forest Park.

The difference is, of course, that this is a graveyard. It's full of dead people, and the stones that mark where they lie. So you stroll around enjoying the foliage, the carefully arranged treescapes and ponds and hills and hollows, but every prospect is centered around tombs.

Of course these are tombs of wealthy Bostonians from the mid- to late nineteenth century: romantic in the extreme, decorated with all manner of statuary, all kinds of Greco-Roman motifs and Romantic imagery. 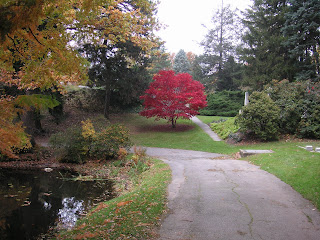 Romantic is the key word: the whole place is like a strollthrough the Romantic imagination. The earth itself is sculpted so as to epitomize the contemporary ideal of the picturesque - hidden pools meant to evoke lonely cathedrals of nature, dells shaded by huge maples and ringed by gothic tomb entrances, mausolea designed to look like rustic forest chapels.

And everywhere there's mortuary sculpture. Angels, gods, eagles, urns, ivy, all of stone, all standing out white against the leaves and grass, like ghosts or something.

I've tramped around any number of old New England graveyards, the 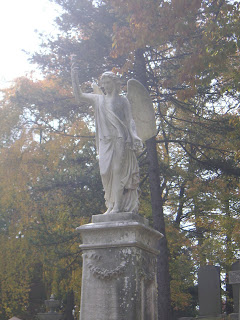 style that preceded Mt. Auburn - I can't get enough of them, the old death's-head tombstones, the eighteenth-century epitaphs. Compared to them, this would have been a startling new conception of death and the afterlife.

As well as a nice place for a stroll in early November.

Posted by Tanuki at 9:37 PM No comments: 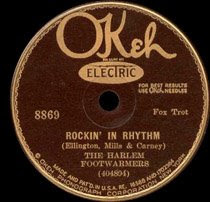 The Tanuki doesn't usually write about jazz, because he doesn't know how to write about jazz. He likes jazz, but doesn't have enough music theory to listen to it intelligently, much less write about it: he approaches it like Faulkner's illiterate preacher does the Bible - with faith.

But here's a moment of genius. Duke Ellington's 1930 recording of "Rockin' In Rhythm" (released under the pseudonym The Harlem Footwarmers - sweet!). If you can handle ram files, you can hear it here; youtube has lots of different versions of it, but not the original, and later versions seem to be taken at a faster tempo. The original swings along at this nice easy pace like fingers walking up your shoulder to tickle you behind the ear.

The genius bit - the whole thing's genius, of course, but the bit I'm talking about - is the unison theme that starts the whole thing off. Yes it's an exquisite sound, a perfect blend of saxes and clarinets, with a little dirty trumpet adding a remark here and there. And that's genius. And yes the rhythm here is bite-your-lip sensual, bass, banjo, and funky drums all scooching it along like a pat on the ass. And that's genius too.

But dig this: the figure at the end of the theme. The unison line goes up, up, hits its sweet spot, then does this eight-note descending thing to bring us down into the solo spots. But what's genius is, you think it's done after those two bars, and then they keep descending for another two bars, softer.

That's the stuff.
Posted by Tanuki at 9:16 PM No comments:

The Tanuki supposes he's an Eric Clapton fan. One way or another he's ended up owning all of Clapton's solo albums, all of his work with Cream, Blind Faith, the Yardbirds, and the Bluesbreakers, and a lot of his session work. Clapton's the subject of one of the Tanuki's infamous homebrewed multivolume anthologies (somewhere around twenty volumes and counting). But the Tanuki's personal jury is still out on Clapton as a guitarist.

Viz. "Good Morning Little Schoolgirl," an October '64 single from his tenure with the Yardbirds. Distantly derived from the old Sonny Boy Williamson blues (itself covered by lots of people, including a definitive reading by Junior Wells in 1965, which in turn formed the basis of the Grateful Dead's version, found on their first album), this is a pop song (as Sam Phillips would have said). And it's a good one.

It's full of hooks. Starts off with an effective harmonica riff by Keith Relf, interspersed with a peppy little "whoa-whoa" vocal part. The verse/chorus part is catchy and well arranged, nice harmony vocals (with touchingly jejune lyrics about soda shops, the twist, and other things that Junior Wells would cackle at).

Then we the guitar solo. Right away we're better off than we are on most early Yardbirds cuts. I like the Yardbirds: Five Live Yardbirds is one of the more exciting documents of its era: but it took them a while to realize that Keith Relf, who was at best a competent harmonica player, shouldn't be taking up valuable solo spots when you have the likes of Clapton in the band. So the fact that we have a geetar solo here is good.

And it's a perfectly serviceable solo. Nice fuzzy tone, nice smooth phrasing, cool little jagged sign-off at the end. Rhythmically it starts out in classic Chuck Berry territory, before rising to a bluesy wail. It's a good solo.

So why was it that I never noticed it until I'd listened to the track at least two dozen times? Serious question: I often find myself spacing out during Clapton's solos, even in his early, Is God, years. Not that they're not cool solos - when I take a moment and pay attention, as above, I usually find something to really appreciate. But with a few exceptions I find they tend not to reach out and grab me like, say, a Robbie Robertson solo, or a Hendrix solo, or a Duane Allman solo.

Could just be that Clapton's boring. And sometimes I think he is, but in my more charitable moments (or moments when I try to explain to myself how I ended up with his Complete damn Works), I decide it's probably because he tends to play what's best for the song. That is, he tends not to try to transform the song with his solo, but merely complete it. That's what happens here in "Schoolgirl." It's a good record, and the solo contributes to that, even if it doesn't call attention to itself.

This is the conventional wisdom on Clapton's post-Derek work. I guess what I'm saying is, I find it often to be true about his sixties work, as well.
Posted by Tanuki at 4:45 PM No comments: