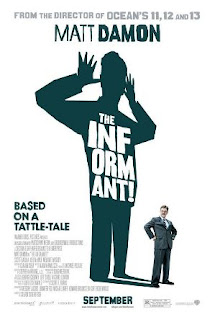 Saw The Informant! the other day. Yes, we're working our way through movies we missed last fall. While making sure to miss plenty of movies this summer so we have something to catch up on this fall.

Maybe it's just that I haven't watched enough Steven Soderbergh to get this movie. I've watched my share, but mostly the wrong ones (loved the Oceans movies). In any case, I was disappointed by this. I appreciated its stylistic qualities - like David Edelstein, I thought this film felt a lot like Burn After Reading - but for me they weren't enough to save the film. Jim Emerson, who's always worth keeping in your RS feed (do people still use those? I do), disagreed. Read him for a pretty persuasive defense of the movie.

Not quite persuasive enough for me, I guess. I felt (again, like Edelstein), that it seemed that Soderbergh was "utterly uninterested in corporate misbehavior and its ramifications."

Like, this movie seemed, to me, to be guilty of exactly what the Coens are always getting accused of, but falsely in my book: too much detachment. Burn After Reading was, I submit, passionate about things like the effects of the spy-on-your-neighbor policies of the Bush administration and the overall dumbing-down of America; it just expressed those passions in a characteristically polite and urbane way. The Informant!, for all its pleasures, didn't really seem to care much about what ADM was doing to consumers in the '90s. (Or maybe this was just the wrong movie for me to see when I'm upset about BP deleting the Gulf of Mexico...)
Posted by Tanuki at 12:47 AM No comments:

So I was listening to some Madonna at the gym the other day (don't ask why: someday I may tell you), and I realized that while I'm real hit-or-miss on her dance stuff, I tend to like her ballads. "Take A Bow," "Love Don't Live Here Anymore," stuff like that.

What's more, I realized why, but to explain that I'm gonna digress.

It may have slipped out that I sometimes get hooked on Idol. As a music lover it's easy to do, in spite of or maybe because of the fact that most of the performances are pretty unmusical. I've always maintained that knowing bad arts helps us recognize the good, and this show proved that to millions (consider this my tribute to Simon).

One of my constant gripes about Idol is that everybody oversings. Ever since Mariah Carey, at least, pop-soul has been under the delusion that good singing=an overabundance of melisma. If can do vocal gymnastics, you should do them all the time, the thinking seems to go, and if you can't do them, don't waste our time. Now I've got nothing against a good flight of soul fantasia, but like everything it has a time and a place. Right now in pop music it seems like it's always the time and the place. It reminds me of guitar heroics in the '80s: every band had to have an Eddie Van Halen, and every song had to have a pyrotechnical guitar solo. It gets meaningless after a while. That was six-string wanking, this is vocal-chord wanking.

It struck me that Madonna doesn't really do that on her ballads. And I think it's because technically she's not that good a singer. I don't mean that as a knock on her. Some of my favorite artists have had technical limitations (Dylan, Miles): what makes them great is their ability to make those limitations work for them rather than against them. In Madonna's case, what that means is that since she can't rip it up improvisationally on the ballads, she has to lay back. Another way to put it is that she's smart enough to get out of the way and let a beautiful melody do its thing.

I appreciate that.
Posted by Tanuki at 11:58 AM No comments: 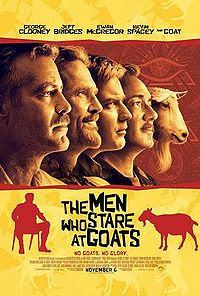 Watched this a while ago, never blogged it; today seems like a good day to do it. The Men Who Stare At Goats, a 2009 product of the Grant Heslov/George Clooney team. Not quite as good as their last one. But good enough.

In fact, there's a lot wrong with this movie. But it's mostly redeemed by what's right with it. For example. Wrong: Ewan McGregor as a Michigan reporter. He never gets the accent right, and never quite sells us on himself as a sad-sack. Right: Ewan McGregor as the outsider in a movie about self-professed Jedi. That's not the only bit of meta casting: at the film's center (narratively, not dramatically) is Jeff Bridges as a New Age military theorist - somehow uniting both the Dude and Walter Sobchak in one body. (He's consciously channeling the Dude here, too - although as we learned at the Oscars, Jeff Bridges really is the Dude.)

That's exactly what the movie gets right, but it's hard to put that into words, really. The central premise is that in the '70s there was a movement in the military to create kinder, gentler ways of making war - a supersoldier program, but one that defined the super soldier as one who is in touch with spirituality, peace, himself, and nonviolent ways of resolving conflicts.

It's a ridiculous premise, one of the most ridiculous imaginable in 2009. Never mind the fact that it supposedly really happened. It's just impossible, from this vantage point, to imagine an era in which this stuff was taken seriously - not the supernatural stuff, but the peace & love stuff.

But of course Nick Lowe and Elvis Costello said it best: what's so funny 'bout peace, love, and understanding? I mean, the fact that we don't take this stuff seriously now is the biggest indictment of our society imaginable, I'd say. And that's what the movie's about, on one level. It's about ideals flourishing for a brief moment, and then being crushed by the evil in our natures - in this case, somebody comes along and corrupts the movement and instead of new ways of resolving conflict all we get is new ways of torturing people.

So it is an Iraq War movie.

But it's not a bitter movie. That's the strange thing about it, and ultimately the most touching. True to its subjects' hippie ideals, it imagines that the whole thing can be solved by just dosing the whole camp with acid - then, after we free the torture victims, we'll all wander out into the desert and enjoy some self-realization. Even the bad guy will mellow out.

It's not remotely realistic; the movie knows that. But it's not handled as camp, either: the movie gives it to us a very beautiful ideal, no less important for its being doomed.

Who knows? Maybe if someone had just dosed the whole Cheney junta a lot of this could have been averted. At the very least I think this world could use more hippies rather than less...

Happy Memorial Day.
Posted by Tanuki at 3:26 PM No comments: