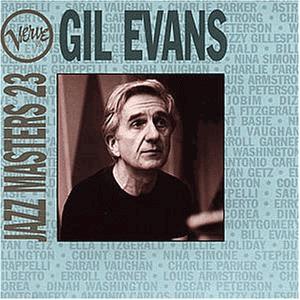 This is a compilation of sessions that Gil Evans recorded for Verve Records between 1963 and 1965;  mostly under his own name, for The Individualism Of Gil Evans, but some done for Kenny Burrell (for Guitar Forms) and Astrud Gilberto (for Look To The Rainbow).  It comes just after, in other words, Evans' last major collaboration with Miles Davis, the troubled Quiet Nights.  And like that one, there's a lot of bossa nova here.

The Tanuki is a '70s rocker at heart.  Fist-pumping arena rock, lighter-flicking power ballads:  that's the ground from which I sprang.  I've always listened to more than that, but unsurprisingly I don't think I've ever completely outgrown my early training to put most of my faith in music that rawks and to mistrust music that's too soft.  At some level I'm still that adolescent sitting on the queasy avocado-green nylon seats of his grandmother's over-air-conditioned Chrysler squirming because she insisted on the easy listening station (Percy Faith! the Sandpipers!) and wouldn't let me switch to KATS-FM (Van Halen! Loverboy!)...

Like I say, I've always listened to more than that, and for most of my adult life, in fact, I've been aware that some of the artists I've come to care deeply about I probably first heard, fingers in ears, on the easy listening station.  Astrud Gilberto.  Ella Fitzgerald.  And Gil Evans.

And while I try to apologize to no one and make no excuses for my taste in music, sometimes I find myself arguing with that adolescent within about what I'm listening to.  Case in point:  mid-'60s Gil Evans.  He's working with some good soloists here, but there's no denying that none of them have the draconian economy of emotion of Miles - none of these recordings, therefore, have any of that harsh austerity to counterbalance Gil's lushness, none of that fire to counterbalance Gil's air-conditioning.

So is this easy listening? is what that adolescent within asks.  There's no question I like it.  While I have probably never voluntarily listened to Percy Faith, it's easy to hear that Gil Evans is doing some pretty serious stuff here - it's not lounge music, not cocktail music, but put-on-the-headphones-and-pay-attention music.  The subtle discord that he specializes in, the softly seething rhythms almost but not quite obscured by the gliding winds and horns...  Evans is making here the kind of tension, the kind of moodiness, that I usually point to, in these arguments with myself, as evidence of music that's not (just) easy listening, but that's something more.

And yet I have to admit:  for all the tension, for all the moodiness, for all the headphone-ready attention to detail...it's pretty gentle music.  Soft.  Easy.  And at 42 I find myself reaching for that kind of thing a little more often than I used to.  Not necessarily dreaming of kid-free lawns yet, but I may be getting there. Was Grandma right?  Maybe, maybe not - that's not what I'm trying to get at here.  I'm not sure what I'm trying to get at.  The frustration of not being able to articulate or hold fast to any absolutes of taste? Anxiety about getting old?

Well yeah, that for sure.

Artistic tastes, fashions, aesthetics, canons:  in a way these are always a battle between generations, between old people maintaining that the young whippersnappers have lost the plot and young people complaining that the old farts have missed the boat.  And in this battle, the young have always already won:  the old people will die first, and the younger people will write their obituaries, and they'll write them their own way.  One of the frustrations of getting older, I'm learning, is realizing that the American Idol take on Queen has already triumphed over Queen itself, because Freddy Mercury's dead and Roger May is old while Phillip Phillips is young and pretty, and there ain't nothing anybody can do about it.

It's some consolation, of course, to step back and realize that in the long run, we're all dead, and that for the most part, the good shit lasts, so that we can all look back and enjoy the best of what each generation had to offer, acknowledging the generational battle without having to endorse either side of it:  we can listen to the Sex Pistols and Led Zeppelin, Nirvana and Guns 'N' Roses, Queen's Jazz and Gil Evans's...  In other words, youth has always already lost to age.  Some consolation, like I say:  but only some.
Posted by Tanuki at 12:36 PM 1 comment: