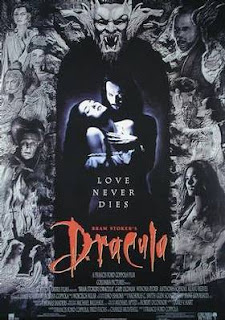 Happy Halloween. We celebrated it like we usually do, at home waiting for trick or treaters who never come and watching Francis Ford Coppola's Film Of Bram Stoker's Dracula.

On the first point: in Boston, and now in Eugene, every year that we're in America for Halloween, we buy a bowlful of candy (mini candy bars, because that's what I most loved to get when I was a kid) and hope we'll get trick or treaters. Mrs. Sgt. T, being Japanese, has never had the experience of giving out candy to trick or treaters. It's one of those American things she's always wanted to do, see all the kids in their cute costumes, hearing them say thank you when you toss candy in their orange plastic pumpkins.

But we never get any trick or treaters. Is it because we live in an apartment? When I was a kid we used to love trick or treating apartment buildings - lots of candy in a short time, very efficient. But then again we were always a little nervous, going inside a strange building, where the porch-light-equals-candy code was inoperable. Do today's kids avoid apartment buildings? Or maybe nobody trick or treats anymore at all? Is the world too dangerous for parents to feel safe sending their kids out to knock on strangers' doors? Anyway, this is one more year when we have a bowlful of Almond Joys left at the end of the night. Like we need the sugar.

On the second point: we love Coppola's Dracula, and we make no apologies for it. Yes, Keanu Reeves can't act. Yes, it has an early-'90s big hair vibe. Yes, it goes way over the top. But... Actually, not "but" on that last point. Going over the top is an aesthetic we like, and it certainly helps this film. The operatic love story, the Jesus pretentions of this view of Dracula, the unsubtle Victorian-modernity subtext, the rococo editing techniques... It's all wonderful. It's Coppola's detailed visual genius at its finest.

Dracula chasing Mina around the cinematheque, then he catches her. She faces him, he reaches out to her, and over his shoulder you can see what looks like one of the Lumiere films, a train barreling down the tracks toward the viewer - toward Mina.

And: every scene with Sadie Frost in it as Lucy Westenra. Coppola's version of the story really ramps up the eroticism, in keeping with our current understanding of the vampire mythos, and Frost represents that part of repressed Victorian-modern sexuality that just can't wait to be liberated by the Count. She's on fire with it.
Posted by Tanuki at 11:37 PM No comments:

At long last we know the full background of one of the Dolls: how she came to be a doll, and why (I’m not convinced we know Caroline’s full story yet). And the surprising thing is, that wasn’t even the most exciting thing about this episode.

It was welcome, though. That tantalizing scene we got between Sierra and Nolan in Episode 8 (“Needs”): we get everything it promised us. Nolan was using the Dollhouse as a date-rape drug; also as revenge, and sick entertainment. We get closure on him; in Priya’s desperate plea to be cleansed of the memory of what she did to him, we also get a hint of why some of the other dolls might have agreed to their contracts. Memories (like Victor’s: is he there to “recover” from post-traumatic stress disorder?), guilts (November, and now Sierra), they’d do anything rather than have to live with (which is it for Echo?). Notice the view we get of Priya right after she kills Nolan? She stands up, and we see her in silhouette against her old painting of the bird. It turns out that it’s not Nolan who’s the big black shadow threatening her avian freedom: it’s she herself.

We also get the answer to the real question Episode 8 left us with, which is: how much did DeWitt and Topher knew about Nolan and Sierra? The answer is, not much. They thought she was crazy, and under his care: they thought they were helping her. When they realize they were wrong, they’re horrified.

It’s a well-named episode, because this is the one where everybody has to answer the old labor movement question: which side are you on? (And of course one way to read Dollhouse is as a metaphor for capitalism: we’ve got owners and workers, management and labor, exploiters and exploited. Somebody among the workers has awakened to their plight, and is going to try to organize them.)

It’s all about belonging: deciding which side you belong to, or trying to make others your possessions. Nolan uses his connections with the Dollhouse, and his knowledge of neurochemistry, to try to make Priya belong to him. When his plot is exposed, Topher tries to free Priya; but in the end, her attempt to assert her autonomy results in her signing herself over to the Dollhouse, some parts of her permanently. She belongs to the Dollhouse in a deeper way than she did before.

Topher and Adelle have to choose sides, too. Adelle thinks this house belongs to her, and that she can run it as she sees fit. The Rossum corporation makes it clear to her that she’s wrong: she belongs to them. Either she toes the line or she goes to the Attic. She, in turn, tries to make Topher play ball, saying he has no choice: she even reminds him that he’s in this job because he has no morals, and therefore belongs in/to the Dollhouse. He chooses differently, but his choice goes so wrong that, like Priya/Sierra, his dependence on the Dollhouse is only strengthened. Rossum’s grip tightens, and our characters begin to feel it: they can choose to accept it, like Adelle, or be made to accept it, like Topher, but either way, they’re owned.

Adelle thinks everybody in the Dollhouse is owned by the Dollhouse. We know she’s wrong: Echo is free, in her mind. And, as of this episode, we begin to see where Boyd stands as well. All season long we’ve been able to see that Dollhouse discipline, that Panopticon watchfulness, has been slipping: Echo’s constantly displaying signs of wakefulness, Sierra and Victor are plainly in love. Saunders’s alienation (then flight), combined with Boyd’s indifference, explained it: but now Boyd has taken a side. He knows Echo is awake, and he’s chosen to abet her in whatever she’s planning. We always suspected he was a good guy; now we know.

At the same time, we also now know he can supervise the cover-up of a murder, and the dismemberment of a body, without batting an eye. Boyd’s a little bit scary now. Ex-cop? Is that all?

All of this to think about, and so little time in the episode to think about it, because you were too busy feeling it all. It was probably the deepest episode yet, emotionally: just wrenching. Topher is more and more becoming the emotional center of the story, as we watch him wrestle with his conscience. Here we see him, really for the first time, begin to sense that what he’s doing might go horribly wrong. “Epitaphs” tells us both that it will and that Topher does have enough of a soul to be driven mad by his role in it; now we see that soul emerging in the present.

How cool is it, by the way, that it’s a book that reveals that Echo is awake? It could only be a book. The point is that she has broken out of the eternally-refreshed now state of the Doll: she’s engaged in a long-term, multisession learning project, one that implies progression, directionality, awareness of past, present, and future…it couldn’t have been a newspaper, or a blog, for example. Or, more to the point, a typical TV show, where each episode stands alone, allowing you to pretend that last week’s episode never happened. It could, however, have been something like Dollhouse…
Posted by Tanuki at 11:14 PM 1 comment: