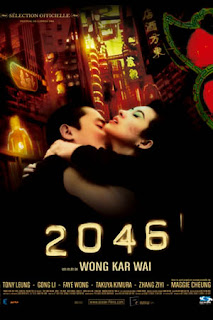 This is the first Wong Kar-wai joint I've been disappointed by.  Knowing that this was a loose sequel to In The Mood For Love, which I loved, I was expecting great things.  And there are some great things here, but the whole thing isn't a great thing.

Visually it's impeccable - but that kind of goes without saying for Wong and Doyle by now, doesn't it?  They're expanding on their '60s-style-and-texture fetishes of the previous film (there's a shot with a green-tinged Faye Wong in the foreground and a green naugahyde chair in the background shadows that just knocked me out), and adding to them a deliriously mod futurism.  The sci-fi elements in this film, while a disaster for the story, allow them to cut loose with some near-Barbarella level visual play.  Someday I'd like to see them cut loose with a full-on sci-fi flick - I'd expect something along the lines of Fifth Element, style style style.

Unfortunately, the gynoid and Train to the Future bits strike me as silly in unintended ways - Kimura Takuya looks particularly lost in these scenes, and at one point Faye Wong actually starts moving in stop-motion, like every ten-year-old does when imitating a robot...

As for the rest of the film, well, it just didn't do it for me.  Maybe it was unfair to compare it to In The Mood For Love, because in comparison to the clear emotional through-line in that film, in this one the emotional arcs seemed muddled to me.  Maybe it's because Tony Leung's character's motivation was left unclear right up until the end.  As Mrs. Sgt. Tanuki summed it up, it's a movie about a guy who can't get over a past love - but we don't learn that he even had a past love until ten minutes before the movie ends.  Of course if we believe that this is really a continuation of In The Mood, then we already know that - but there are enough shifts to leave us in doubt about that at first, I think.

Maybe I'm just getting impatient with the director's prioritizing of visuals and mood over story;  I know that's his bag, and I expect it.  But in what I consider his best films, the intimations of story that do sneak in support the visuals, and the whole thing comes together.  Not so here.
Posted by Tanuki at 11:29 PM 1 comment: