Here's a post I never thought I'd write.  Stephen King ain't half bad, and The Shining ought to be part of the Canon. 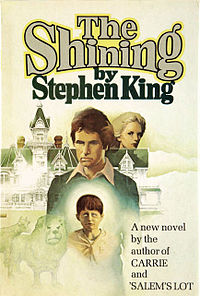 Me and Stephen King go way back.  When I was in high school in the '80s he was all the shit - he was what most of my friends who read books read, when they weren't reading Tolkien.  He was also the one popular writer that educators - like my senior year AP English teacher (the same one who gave me a reader's guide to Ulysses as a graduation present) - would recommend to kids to get them "hooked on reading."  The thinking seemed to be that he was a good enough storyteller to entice even the most illiterate teen through the arduous task of turning pages and sounding out words, but that he was also - somehow, someway - "literary" enough that teachers didn't feel like they were utterly turning their backs on the Grand Tradition of Western Humanism by recommending him.

I never read him at all until this last spring.  Two reasons, I guess.  One is that Stephen King at the time always struck me as the literary equivalent of, I dunno, Foreigner?  Kiss?  Bon Jovi?  I mean, name a big dumb hard rock band of the '80s.  But the second and real reason, which I would in fact admit to if pressed, was that horror as a genre scared the shit out of me.  I once made the mistake of watching a Freddy Krueger movie and had to leave the theater;  even a few years after high school when I saw Silence of the Lambs, I had nightmares for months.  So, Stephen King?  No thanks.

My horror aversion kind of slipped away as I grew older and more phlegmatic.  After 30, anyway, I no longer got spooked by stuff like that.  But still, I never got around to reading King until this past spring, when I was teaching Yoshimoto Banana's Amrita.  I kept reading that King was one of her favorite authors, and it bothered me that I'd never read him.  I picked up this and a couple of others, and wow:  not bad.

I knew, by this time, the Kubrick film, but (like, my sense is, most Kubrick fans) I expected this to be a case of a nontranscendent genre novel getting turned into Something More.  But in fact the book is already Something More.  The horror is there - the genre requirements get satisfied, and then some - but it's also a surprisingly detailed and sensitive character sketch.  You get to know Jack and his problems well enough to understand quite easily why the Overlook Hotel found him a good target.  Which is to say, you come to believe Jack capable of great cruelty and violence without any help from supernatural forces.  And (what helps make it satisfying for those who read for depth rather than just thrills) you also come to pity him - to understand him well enough to feel sorrow as well as horror at his character.

What's more, ever since reading it I'm seeing Shining references in the most surprising places.  The one that really got me was when I realized that the last part of Murakami Haruki's Wild Sheep Chase is an obvious gloss on the ending of The Shining.  (The book version, not the film.)

Part of the value of a canon for me - why despite having come of age during the Canon Wars and despite devoting my career to the study of books that would never have been admitted to the Canon in the West when it was at its strongest - is its utility.  I like being able to get the joke.  I like being able to know what Murakami's doing when he blows up that house at the end of the book.  I like what he's doing:  I like how he's using his work as a commentary on King's, and King's work as a commentary on his own, and I like the mental exercise of comparing the two, and the aesthetic payoff that comes with appreciating the two in juxtaposition.  A canon gives writers and readers the tools to do this.  Of course writers will always make references, and will and should never be limited in those references to a predetermined set of works - that's not what I'm saying at all - and I would never advocate for a canon as a thing written in stone reflecting some sort of eternal principles.  I'm just saying that if a citizen, in the process of becoming educated, is exposed to some kind of body of works that have helped shape the culture around her, then she's that much more equipped to understand that culture - where it's coming from, what it's actually trying to say (and do) to her.  ...In the end, of course, what I'm talking about is social cohesion, right?  I believe there ought to be a way for us to learn how to talk to one another, get at least some of each other's jokes, without it necessarily meaning that we're all homogenized.

On the other hand, I still haven't read Ulysses.
Posted by Tanuki at 9:10 AM 3 comments:

Some rather late Stan Getz, and a very late release for Verve - they'd be absorbed into the Polygram conglomerate the following year.  Not quite the end of the line for Getz;  he'd continue recording pretty much up to his death in 1991.

The tune is "Dynasty," and it's part of a double-elpee recorded at Ronnie Scott's jazz club in London in March 1971 and released as Dynasty the same year.  The backing musicians are all Europeans, and they're pretty good - Eddie Louiss on the organ is the one to pay attention to.  Unfortunately the recording isn't the best, and his quieter moments get kinda lost in the ether.  But he's a monster on this track (the only one I've heard from the album, actually - I have it on a Getz comp), one minute vamping like a seedier Booker T, the next sounding like Keith Emerson in a poker game against Gregg Allman.  A whole different bag than Getz's labelmate Jimmy Smith.

And Getz himself - well, if you still think of him as Mr. Bossa Nova and little else, then you really owe it to yourself to listen to this track.  He's clearly been listening to Coltrane, and brings both the soulful-wailing and polymathematical-abstraction aspects of Saint John into his soloing here, but he does it without losing the essential personability, the accessible emotion, the heartbreaking gentility of tone, that always marked Stan's own playing.

In other words, this is a cool nine minutes.
Posted by Tanuki at 12:07 AM No comments:

Only once in a blue moon do Mrs. Sgt. T and I go out for live entertainment.  Almost never.  This is one of the reasons it didn't bother us to move from a metro area of a millionish to one a tenth that size:  even with world-class music and theater venues all around us we hardly ever went out.

But last night we did.  Saw a poster in a coffee shop and needed a night out and so we found ourselves at the Shedd Institute in downtown Eugene seeing a performance of Lady, Be Good.

Lady, Be Good!  It came at a good time.  In the last year, unbeknownst to my blogging self, I've been gradually (okay, maybe a little half-heartedly) exploring the Great American Songbook via jazz interpretations of it (there's a great series of Verve discs...).  And it got me intrigued by things I never would have approached willingly a couple of years ago - musicals, namely, and especially of the archaic Broadway variety.  I found myself excited about the prospect of hearing some of these songs (I only knew "Fascinating Rhythm" and "Oh, Lady Be Good") in their original context, sung straight.

I wasn't disappointed.  It's local theater, okay, so it wasn't perfect.  The orchestra took a while to get warmed up - they played the overture and everything, which was nice (it quotes from "Rhapsody In Blue," which had premiered not long before this shows did in 1924), but they didn't really hit their groove musically until near the end of the first act.  Same went for the actor/singer/dancers.  Their comic timing didn't really click until the second act.  It was a half-staged production - full costumes, minimal props, singing and dancing at the front of the stage, but dialogue delivered in read-through fashion with a narrator.  It might have been better if they'd gone ahead and acted the thing;  it might have helped with their timing.

But at its worst it was still entertaining.  And for most of the second half they managed to bring the farce alive, so that you could see how it was supposed to work.  They even pulled off the Charleston number in quite nifty fashion - nobody can match Fred and Adele, especially the Fred and Adele in my imagination, but these dancers at least made me feel like I could imagine Fred and Adele.

Yeah.  So now I've seen a Gershwin musical, I've floated on the gentle swing of "Lady, Be Good" and "So Am I," I've had "Fascinating Rhythm" stuck in my head for twenty-four hours, I've, you know, figured out why all that fringe is there on flapper dresses.  And for the hundredth time, in the hundredth different way, I'm thinking what a surprisingly cool town the Euge is.  Only a hundred thousand people, in the middle of nowhere, Oregon, and yet I can go downtown and see a revival of a 1924 Gershwin musical.  And it's pretty okay.