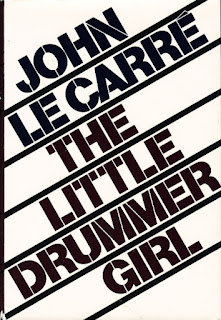 Obligatory first reaction, which I'm probably undercutting more than I mean to with this self-ironizing remark:  this book could have been written today, almost thirty years later, and not many of the details would need changing, and that's a disgrace.  Well, all of the details would need changing:  but not the overall arc.  And since Le Carré's genius is in the details, I guess it's better to retract that first claim entirely.  This book is not just about the heartbreaking intractability of the Israeli-Palestinian conflict.  It's about the details of where that conflict stood in the early '80s, and how it was thought about by certain Western Europeans.  And for that, when you read it today, it's an education.

But like everything else I've read by Le Carré so far, this so far transcends the political and historical specifics of its subject matter as to make me all but forget that, oh yes, it's also about a young woman who gets caught up in the post-Munich '72 cycle of attacks and reprisals.  Because what resonates most about it is its portrait of a young woman who is so disenchanted with her home country, so disillusioned about her own background, so sick of her self, that she's all too eager to allow herself to be enchanted, illusioned, and healed by the Other.  Whatever Other presents itself, apparently.

In that, this book struck me almost as a modern retelling of Waverley - one of my favorite books, although I seem to have never blogged it yet.  That, too, is about innocent idealism and those who would take advantage of it;  but if anything, Le Carré is more evenhanded than Scott.  He doesn't have Scott's conservative faith that it would be an unqualified good for the girl to grow up and out of it.  Indeed, this book rivals Darkness at Noon in the rigor with which it makes us see the logic of both sides' positions.

The spymaster - or rather, one of them, the one known alternately as Becker and Joseph - also turns out to be a fascinating psychological study.  In Smiley we got a portrait of the spymaster as inertial force, somebody who, in the end, is struggling because he's always struggled, and because he's being struggled against, but whose ideological foundation has long since crumbled away;  in Joseph we get spymaster as psychologist.  Not as analyst, but as someone whose job it is to help the patient into and through transference - to be for the patient (the agent) whatever the patient (the agent) needs him to be, in order to create the patient as true agent.  To get Charlie to do what he needs her to do, Joseph has to let her fall in love with him.  In the hands of a lesser spy novelist this would be James Bond territory - sleep with a woman and she'll do whatever you tell her - but here we get glimpses of just how much it's taking out of Joseph to treat another human being like this.
Posted by Tanuki at 11:57 PM No comments: