Don't Leave Me This Way: Harold Melvin & The Blue Notes vs. Thelma Houston

So here's what you do the next time you have ten minutes to spare and a desire to further your musical edumacation, or just groove for a while. You dial this up on your youtube, and then this.

"Don't Leave Me This Way" is a classic Gamble and Huff record: their composition, their production. Performed by Harold Melvin and the Blue Notes, included on their last album with Teddy Pendergrass, 1975's Wake Up Everybody. It wasn't released as a single in the US, if you can believe that; maybe that's why this original version is somewhat less known now than Thelma Houston's cover.

But the Blue Notes' version is epic. Let's go through it. It starts off calm, with a soft electric piano (Fender Rhodes?) build-up, given a gentle tension by the congas. The rhythm guitar starts to add a few subtle licks, Teddy starts to hum over the top, then a couple of cymbal strokes bring in the groove, and just like that we're into the verse. Easy but insistent. The horns, the strings, all the hallmarks of a glossy, classy Philadelphia International production.

Then everybody comes together: big vamp, big fills, and boom, big loud chorus. "Don't leave me this way," and we sink back listlessly into the verse. Again to appreciate all the hallmarks of the Gamble and Huff approach: you could follow any one of the instrumental elements separately and have a satisfying listening experience, as each part builds and evolves on its own.

Each part tells its own story. That's what's going on with this record. Teddy, the Rhodes, the strings, the horns, and the Blue Notes are telling the story of why he doesn't want you to leave him this way. When they finally climax into the long vocal jam, listen to how everybody contributes a little detail to Teddy's plea. It's a fantasia on not wanting you leave him this way. Finally they break it down to just bass, congas, and Pendergrass. The Rhodes comes back in and boogies a bit in the spotlight, and Teddy says "you. can't. go." Are you gonna try and tell him otherwise?

Yes, this record is funky, yes it's danceable. It's a disco landmark, but at the same time it's both more and less than that. Because most of all it's soul: everything contributes to this total exploration of the emotions of the singer and the song, and that's why the narrative is important. It all brings you right back home to the humanity of the thing.

Thelma Houston's version was released as a single on Tamla in December of 1976, and I'm tempted to say it's a typical Motown thing, but I'm not as familiar with '70s Motown as I should be, so I'll refrain. (And I must apologize for the fact that the youtube version is truncated: it's the only fragment I could find of the single version on youtube, though, and besides, you've heard this record a million times.) What it is, is a typical disco record.

It keeps a lot of the elements of the Blue Notes version. That mellow beginning; here it's all mellow, though (besides the startling string glissando that cues Thelma's moaning), because the conga is absent. Electric piano, strings, and a gentle bass. But then, right away, things start to thump. The disco beat comes in. The arrangement is drastically stripped down and powered up compared to the Blue Notes': fewer musical elements here, and they're all subordinated to the groove, that drum and bass line.

They do the same sort of turnaround as they go into the chorus, but once they get there, it's all bass, that funky onetwothree-four-five figure that ends every line. And during the closing vamp, it's not the vocal but the bass that takes over, joined by a wicked little clavinet and the Motown tambourine.

Thelma's there, and she sings it magnificently, but her role is different from Teddy's. She's not there to tell you a story: she's there to serve the groove. Which is not to say there's no emotion in disco. But it's different from soul in that the emotion is not the focal point, it's another element in the groove. It's a mood-setter, basically.

So who wins, Teddy Pendergrass or Thelma Houston? The Tanuki categorically rejects such false choices: it's a world of wonders, baby, not the least of which is the fact that we can have both versions. We don't have to choose, and don't trust anybody who tells you otherwise.
Posted by Tanuki at 7:21 AM No comments:

The Byrds were the real deal. I mean, listen to this. Recorded during the sessions for Fifth Dimension in 1966, but only released much later.

In classic Jim McGuinn fashion the record starts with an old folk song (check out this fascinating thread to see how old), and then in good early Byrds fashion they juice it up with electricity. Just like the Grateful Dead did to the same song - if you're a Deadhead at all, you'll know this song, and how glorious the Dead's arrangement was. The Byrds' version is very different, and just about beats it.

By the time of Fifth Dimension the Byrds were no longer just folkies with a backbeat: they were a real live, not to mention firebreathing, rock and roll band. This record starts with a riff that would do any garage band proud, and just gets better from there. Check out the way they raise the tension (that freight-train Michael Clarke drumbeat) with every line of the verse, then bring it all back home on the last line, with that dramatic slowdown of the rhythm underneath. Then the way the second verse introduces those groovy Beatles-like response vocals ("your window high" - the whole thing in fact sounds like a mutated, twangy gloss on "Paperback Writer").

Then we get that magnificent sitar-like guitar solo. During this period most of McGuinn's solos were heavy on the Coltrane sheets-of-sound idea, but this is different, very melodic, very simple in fact, emotionally direct. It's reprised, of course, at the end, bringing the song in for a perfect Byrds landing.

You can see why they couldn't release it in 1966. The world would have exploded from too much joy.
Posted by Tanuki at 9:36 PM No comments: 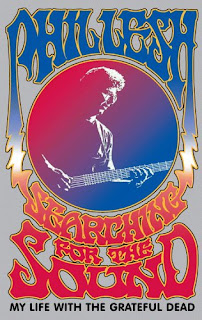 I don’t let myself read music books that often. It’s self-preservation: I’m such a music obsessive that otherwise I’d never get any work done at all. So I’ve had this for three years but never got around to reading it until a couple of months ago. I didn’t even buy it to read: I got it because it was being sold with a bonus disc. That was worth getting: a studio version of “Cardboard Cowboy,” still otherwise unavailable. Yessir, a music obsessive.

I imagine Phil might have written this himself, with no ghostwriter. It reads like he might have – a little more uneven, a little more gonzo, than a pro might have left it. In a good way: you get a distinctive voice, and sentences like this:

"As Jerry's roommate, I was reintroduced every night to one of the great stentorian snores of our time: immense, turbulent, Druidic; rising to a climax, subsiding; then, one last huge percussive gahznrmpf! and a whistling diminuendo."

The music-language overtones of that sentence point to this book's main strength. Phil was the member of the Dead with the most formal musical training, and his perspective on the band's formative years shows just how hard, and how consciously, they were working on their music. Non-fans will never see the Dead as anything but a bunch of stoned hippies - and of course they were that, but they were also tremendously skilled and tasteful musicians genuinely trying to pioneer and perfect their own unique art. That comes out in Phil's account, in passages such as as the one where he describes dragging the band members to a 1967 performance of Charles Ives's Fourth Symphony ("Invisible bands march across the soundstage in two different directions at different speeds; a solo viola mutters an occult hymn-tune as the rest of the orchestra sprays fireworks in all directions; the chorus intones wordless transcendental benedictions as the music fades away into silence"), or the one where he describes the jam sessions that followed Mickey Hart's indoctrination into North Indian classical music (resulting, Phil says, in the band's philosophy that "The one...is always where it seems to be").

The book's main weakness is that this excitement lessens as the story takes us into the '70s, and then really disappears as the book speeds through the second half of the band's career. I don't imagine it's necessarily that Phil thinks, or thinks his audience thinks, that the band's later years were uninteresting; rather, this is a stance shared by most music bios I've read. The tendency is to concentrate on the formative years and climax with the moment of greatest success, and gloss over the later years. I suppose that makes a certain amount of narrative sense, but I'm more interested in an artist's mature years, what he or she does after the big breakthrough, even if it does happen to be a story of decline. Artistic decline is as interesting and instructive as artistic growth; failure can be as fascinating as success. You can even make a satisfying narrative out of it: I learned that from The Mambo Kings Play Songs of Love.

The real story of the Dead's later years has yet to be told; I for one would love to read it.
Posted by Tanuki at 8:42 PM No comments: