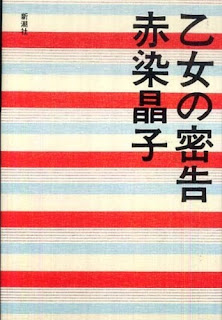 This appeared in the June 2010 issue of Shinchō 新潮, and was published in book form a month later.  It won the 143rd Akutagawa Prize, for the first half of 2010.  It's by Akazome Akiko 赤染晶子.

The title is Otome no mikkoku 乙女の密告, a title which poses a couple of translation problems.  Otome is easy enough:  you could go with "virgin," but that would be overdoing it a little:  "maiden" works pretty near perfectly.  Mikkoku, too, is straightforward enough:  as a verb, it means "to inform on" someone.  How do you get both of these elements into the title, though?  The Maiden's Information doesn't work at all - sounds like "girl data" or something.  The Maiden Informant is about as close as I can come, even though it sort of telegraphs the ending.

First things first:  it's told in the third person, and while the author herself, like the protagonist, studied German in a foreign-languages university, it doesn't feel particularly shishōsetsu-ish.  It's more adventurous, IOW, than the typical A-Prize winner, I felt.

It's about, then, girls, "maidens," at a gaidai 外大, a Japanese college that specializes in the teaching of foreign languages.  This one is an all-girls' school, and the girls in question are studying German.  And this year their prof, a German named Bachmann, has them reading The Diary of Anne Frank.  In German, although it was originally written in Dutch.  The novel comes with a Works Cited list in which Akazome cites both the German and Dutch editions, and makes it clear that all translations from the diary that appear in the text of her novel are by herself, from the German.  And excerpts from the diary play a pivotal role in the story.  The maidens are preparing for a speech contest in which they're supposed to recite passages from the diary, from memory.  The main character, Mikako, has to confront a particular passage that she keeps forgetting, and explore what it is about the passage that throws her.

Akazome's technique in this novel is interesting.  I don't speak German, but I'm pretty sure that the particular prose style she's employing is meant to read as if it's translated from the German.  Certainly it reads like translationese, with much more prominent uses of subjects and objects than normal Japanese prose displays;  it feels like a student translation, where the student is trying to prove to the teacher that she understands the original by accounting for every element of it.  Student translation is, I think, the key:  the result isn't anything like the famously convoluted translationese of Ōe, but rather an almost obnoxiously clear, terse, repetitive prose.  Very effective.

Syntax, as well as grammar, plays a large part in this, and primary among the syntactical choices is that of using the word "otome" for "girls."  That is, every place in the novel where a normal prose stylist would write "shōjo 少女" or simply "onna no ko 女の子," Akasome uses the older-sounding, stiffer-sounding otome, with its undeniable overtones of virginhood.  I suspect that she's intending this to be a student translation of fräulein.  That is, she's giving us the flavor of a class in which the teacher addresses the students, and has them addressing each other, as fräulein, but rather than giving us the German word in katakana, she's giving the textbook translation of it.  And, due to the translationese grammar that she's employing, the word gets repeated again and again and again.

The effect is to thematize the state of being "otome," and indeed from very early on Akazome's narration starts speaking in general terms about the habits of mind and behavior of "maidens."  Susceptibility to rumor, fastidiousness about reputation if not behavior, cliquishness:  these are all qualities that characterize the otome, we're told.  This aspect of the book is fascinating to me, because Akazome is talking about the much-explored, much-discussed shōjo of contemporary Japan, and yet she's not quite, because she insists on calling them otome.  She's defamiliarizing the concept so that we can look at it anew, and she's also pointing out how much our thinking about human nature gets embedded in particular expressions, resulting in a tendency to essentialize.

In fact, by writing in translationese, and exploring the girls' relationship to the German text they're immersing themselves in (more on that below), the story is really about how language shapes us and controls us.  It sets boundaries for what we can say and how we can say it, and therefore what we can think and how we can think it.  And these boundaries - these languages - are narrower than we may think, because they're less a matter of national languages and more a matter of much smaller communities:  college classes, cliques.  And the boundaries are exportable.

The other way that Akazome gets at this theme, besides through her own language (which, she's forcing us to realize, isn't really her own), is through Anne's diary.  First of all we're made aware of the barriers that lie between the characters and it:  Mikako grew up reading it in Japanese, and now she's reading it in German, but she's constantly aware that it was written in Dutch, and she uses the Dutch title, Het Achterhuis, to remind us of that.  In spite of all that distance, Mikako has always felt an intense identification with Anne - more of an infatuation, actually, so that studying the diary as a college student is an intense emotional experience for her.

The passage that gets her is one in which Anne expresses a desire to become Dutch - to leave her Jewish identity behind and become, as Mikako conceives of it, the Other.  And yet at the same time she (Anne) fully owns her Jewish identity.  It's clear that Mikako is deeply affected by anxieties about identity - not so much national as insider/outsider identity.  The damaging effect (on a maiden) of rumor and innuendo, of ostracization, is a major theme of the story, and Mikako seems to be thinking through these issues in terms of Anne's ethnic and national identity.  Is conforming to the group a way of denying yourself?  Is standing up for your individuality the same as "informing" on yourself - reporting yourself as Other and therefore submitting yourself to inevitable ostracization or worse?

I confess, first off, that I haven't read Anne Frank.  I mean to, but haven't.  That said, this aspect of the novel struck me as a bit murky.  It may be that Akazome is trying to suggest that Mikako herself doesn't have the vocabulary (as limited as her language is in this particular semiglot community) to really think through these issues.  In any case I admire how the story raises them but I'm not sure it handles them as well as it could have.

And then there's the issue that comes up whenever a work of fiction decides to deal with the Holocaust.  Is it dilettantish and insensitive to connect Anne's sufferings with those of college girls in affluent, free Japan?  Or is it a tribute to the universality of Anne's experiences?  Does the book do justice to the gravity of the history?  Does its (possible) failure to do so say something else about otome, or this particular community of them?  Do we, alternatively, admire the otome for so far transcending their own culture as to relate so intensely to Anne, on such a universal human level?  Or is the point that they're not relating to the real Anne at all, but only to a version of Anne that they've claimed, or created, for themselves as the model of all otome?

One of the best A-Prize books in a long time.
Posted by Tanuki at 1:06 PM 1 comment:

Once or twice a year - always in the autumn, usually around Samhain - I go back to my old Fairport Convention albums.  I have the three they did with Sandy Denny in 1969, which I find so heart-thumpingly transporting that I've never been able to bring myself to explore the band or the singer any farther.  Nothing else could possibly compare.

Of the three, I agree that Liege & Lief is the best of them.  (However you wouldn't want to live without "A Sailor's Life" from Unhalfbricking or "She Moves Through The Fair" from What We Did On Our Holidays.  You need them all.)

What I can never decide is which song on L&L is best.  It's one of those records:  each song on it has its day, from the pagan invocation of "Come All Ye," which convinces you that, with a little help from Sandy, you could indeed "raise the spirits of the earth / and move the rolling sky," to the appropriately murderous guitar-fiddle wild ride that ends "Matty Groves," to the incantatory canter at which they take "Tam Lin."

But lately it always seems to be "The Deserter" that gets me deepest.  It's the lament of a poor man caught up in the hellish samsara of the draft, a plaint that says man should not have to kill his fellow man and any regime that makes it so perverts humanity, an an observation that it's the way of the universe that mercy and cruelty so often alternate, one leading to the other.  The arrangement and musicians' work provide a perfect setting for this argument, delivering us a world of cyclical recurrence that nevertheless keeps building the tension with each iteration.  Tension and release, tension and release, just like the narrator's alternating bondage and escape;  tension is a mad sawing at the fiddle, release a gentle striding into rhythm.  But of course it's Sandy Denny's vocal that really drives the arrow home:  her cold sensuality, an icicle dripping grief and pain yet catching in its prism the very sun that destroys it.  Her voice is just otherworldly.
Posted by Tanuki at 12:59 AM No comments: