My nerd reaction to this film: it's been cleverly titled to evoke the Who song "The Kids Are Alright" (note spelling difference) but the song appears nowhere in the movie. It probably 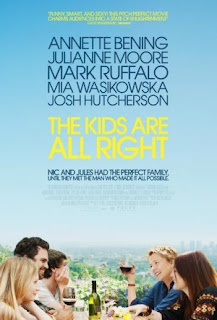 wouldn't have fit - as Jules says about Paul, they're pushing the alternative thing pretty hard here - but then why tease us?

My other reaction: My favorite moment was when Paul calls Jules: their phone conversation. She tells him Nic found out about their affair, he proposes they run away together, and she, incredulous, says, "I'm gay!" and hangs up while he's still babbling away.

Julianne Moore's delivery of that line was perfect. In that one moment you see so much about the character. There's a bitter note of cognitive dissonance there, if you try to parse her sexuality too closely, and if you take this line too literally, because what we've seen of her in the movie so far makes it clear that she's at least situationally bi, not strictly gay. But that's not the point: the point is that, in this moment, when her life is falling to hell because of a shitty thing she's done, she realizes with complete clarity what her life is, what she's chosen it to be, and that she doesn't regret that choice, despite a moment of confusion. She's married: she's committed to Nic, and to their family (not just the individual members, but the idea of it: what it means in her life, and what she means to it). Whatever the exact vectors of her desire, in her life as a whole, she's gay: that is, committed to certain people in ways that society has defined as gay, and she's fine with that definition. At least she feels that it captures more of her than whatever Paul thinks he knows: that's why she sounds so incredulous when she says it, why she talks over whatever fantasy nonsense he's spouting. And maybe she's just realizing all of this in the moment, or maybe she never forgot it, only doubted it. But whichever, this is a decisive moment.

But I also like that this moment of clarity doesn't redeem her - I like that the movie follows this scene with several showing how difficult it will be to repair the relationship. And I like how the movie takes Nic's feelings seriously - it's not a parable about Jules's personal growth, with Nic waiting there to embrace her when she's ready. It's more adult than that, more equal.
Posted by Tanuki at 8:26 AM No comments: