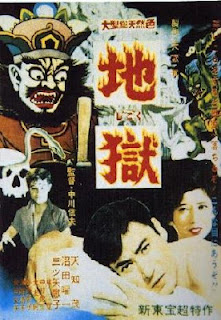 This is a weird film.  The first hour or so is a drag - an intriguing, sometimes darkly ironic drag, but a drag nonetheless.  Amachi Shigeru is nowhere near as effective here as a morally-torn student as he was as a nihilistic samurai in Yotsuya kaidan.  The story veers between the trite and the semi-intentionally surreal, and at all times literally drags - the stately pace of the previous film felt like an artifact of the time, but here it just feels like awkward filmmaking.  And the device that kills everybody is no more believable here than it was when it was (accidentally?) parodied in Monty Python's Meaning of Life.

Then they go, as the title says, to Hell.  Of course this is why you see this movie:  to see the Japanese Buddhist vision of hell brought to life onscreen.  (And the next time somebody tries to tell you how mellow and spiritually laissez-faire and cerebral Buddhism is, show them this film:  Dante's got nothing on medieval Japan for hellfire and brimstone.)

The thing is, even in Hell, some of what you see is ludicrous - hokey and dumb.  The ox-headed torturers (always one of my favorite Hell motifs) look like fat guys in bad makeup waving tinfoil axes, which is what they are.  King Enma looks like a souvenir mask from Taiwan.

So overall I guess I'm saying this film isn't quite the classic that some make it out to be, at least not in my book.  But I will give it this:  some of the images Nakagawa comes up with for Hell are amazing.  Haunting.  I saw this a week ago, and some of the images are still with me.  The luminous mists of the Sanzu River, for one, snaking across the dark screen.  For another, the recurring image of what looks like hundreds of extras, in gray muddy clothes, tramping and stumbling in a slow-motion spiral of numb torment.

Sometimes moments are all you need.
Posted by Tanuki at 12:11 AM No comments: 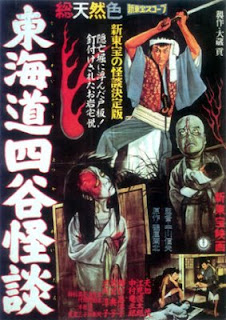 One from the vault:  written in 2008, never posted.  NB:  I now have a DVD copy (Hong Kong pirate, I think), and the colors are truer.  The sickly yellow I mention below was an artifact of the faded print.  Serendipity:  it's even better that way.

Ronin Tamiya Iemon confronts his prospective father-in-law by a muddy ditch.  The father-in-law wants to cancel Iemon’s marriage to his daughter Oiwa, because he’s realized Iemon is a villain.  Iemon flies into a rage and kills the father-in-law and his companion.  The father-in—law’s servant, Naosuke, then suggests a plan.
Naosuke and Iemon lie to Oiwa and her sister Osode, saying that a bandit killed their father;  the four of them, together with Osode’s husband Yomoshichi, vow revenge, and depart for Edo.  On the way, they stop at a waterfall, and while the women are resting in the shade, Naosuke and Iemon stab Yomoshichi and throw him under the falls.  They tell the women that a bandit killed Yomoshichi, and Naosuke and Osode take off in pursuit of him, while Iemon and Oiwa continue on to Edo.
Then we cut to Edo.  Iemon and Oiwa have set up house and had a baby;  Iemon makes a meager living manufacturing umbrellas, while pretending to search for the real killer.  Naosuke and Osode have also come to Edo and set up house—Naosuke has been angling for Osode all along—but she continues to resist his advances.  Iemon and Naosuke are in contact, still plotting, but the sisters are each unaware the other is in Edo.
Iemon and Oiwa are not getting along—poverty does not agree with Iemon.  Soon a chance arrives to marry the granddaughter of a high-ranking samurai, and he realizes Oiwa is in the way.  With Naosuke’s help he concocts a plot to get rid of her, framing her for adultery with a masseur named Takuetsu and also poisoning her.  The poison deforms Oiwa, melting the right side of her face;  it also drives her mad, and after attacking Takuetsu she slits her own throat with a razor.  Then Iemon arrives and kills Takuetsu.  Naosuke arrives and together they nail the corpses to either side of a door and sink it in the nearby swamp.
Then it’s big guilt time for both of them:  they both start seeing Oiwa’s ghost everywhere, and when she’s not around they’re seeing snakes.  On his wedding night, Iemon kills his new bride and her parents, thinking he’s stabbing Oiwa’s and Takuetsu’s ghosts.  Horrified, he takes refuge in a temple.  Naosuke, too, is tormented by apparitions, culminating in the the arrival of Oiwa’s ghost, non-deformed, at his house.  He goes mad and confesses that it was Iemon who killed Oiwa’s father;  Osode, overjoyed to see her sister, follows her to an inn where she finds Yomoshichi, who actually survived the stabbing and the fall.  Together they set off for the temple where Naosuke said Iemon is hiding.
Naosuke, meanwhile, has fled to the same temple, where Iemon kills him in an altercation.  Then Yomoshichi and Osode arrive to take their revenge.  A swordfight ensues, but it’s not really Yomoshichi who does Iemon in—it’s the ghost of Oiwa, taking Iemon further and further into hallucinations or hell or both.  He’s tormented by images of her corpse, Takuetsu’s, flying crimson mosquito nets, snakes, doors, and muddy swamps.  Finally, he’s dead.
This sticks fairly close to the kabuki original;  more settings, but the characters and their actions are more or less the same.  Plus, Nakagawa is putting kabuki elements right up front, with the titles coming over shots of actors on a stage, and kabuki wood-block sound effects cropping up here and there.  Furthermore Amachi looks a lot like a kabuki actor from a wood-block print here—same angular features and exaggerated scowl.
This is a brilliant film.  I saw a faded print in a theater, so I don’t know what the colors are really supposed to be like;  in what I saw everything looked yellowish except for the reds, lots of them, and the blacks, and this was actually was quite effective.  The acting was excellent, the story was handled really effectively, and Nakagawa’s compositions were amazing.  Lots of weird camera angles, shots from above or beneath, lots of slow creepy pans.  An amazing pan past a cutaway set of a whole teahouse, where we peek into different rooms and finally settle on the main characters discussing their plot—long single shot scene.  And the imagery is great—boiling mud everywhere—the first shot of the story proper is this overhead closeup of a frozen swamp, but all you register is texture—you have no idea what you’re looking at until the camera moves up to reveal characters walking by.  Supremely disorienting while at the same time placing you right in the moral depths with Iemon.
Iemon comes across here as both evil to the core and a proud samurai, having Naosuke do a lot of the dirty work.  Amachi is great in the role.  Everyone else is, too—Ôtomo, playing Takuetsu, deserves special mention for having such a distinctive physical presence.
The special effects are pretty good for 1959, and succeed in creating a tense, creepy atmosphere—it’s not a scary movie, but it is chilling in its view of a really really evil guy, and the body count does go pretty high.
The end is essentially Iemon’s descent into hell, complete with the Buddha statue in the temple disappearing before his eyes—he’s forsaken now.  Very well realized, very surreal, horrifying.
A lot of the film’s surrealism reminds me of Suzuki Seijun—the embrace of artificiality, the bravura camera angles, the carefully controlled colors.
Posted by Tanuki at 11:57 PM No comments:

I've been trying to not comment on this article, which I found linked by Andrew Sullivan's indentured servants, because I knew if I did it would turn into a rant, and I'd end up looking like a cranky old man.  But then again, I was a cranky old man when I was 20:  why stop now?


Viewers raised on a steady diet of 15-tab Internet browsing and “Family Guy” are fundamentally more clever than they used to be...

Is stupid.  But it's not just stupid:  this is the Internet, and stupid isn't remarkable.  What's remarkable about it is the particular way in which it's stupid, a manner of stupidity that, while itself still banal, is also indicative of larger varieties of stupid endemic to the culture.

First, the obvious:  arguing that culture now is more clever and meta than it's ever been before in the history of the world, bro!!! is stupid.   Do I need to explain why?  Two words:  Tristram Shandy.  Or, for the Japan-savvy out there:  Santō Kyōden.  The point is that there's always been self-referential, parodic, topical, fourth-wall-breaking, maddeningly specific comedy:  that's how humor works.

Second, the even more obvious:  kids always think they invented the world.  I used to think it was just that kids always think they were the first generation to discover sex.  But lately I've been realizing that the conspiracy goes farther:  kids think they invented irony, morality, in-jokes, cool, and kids think that whatever technology they're using is the breakthrough that has reinvented the species, that they're fundamentally different from older people, who Just Don't Understand.  This is what's behind most of the internet utopianism you see out there:  it's either young people congratulating themselves on having the wisdom not to have been born sooner than they were, or older people pandering to young people, which is always a smart business strategy.

Don't misunderstand me:  I'm not saying that these kids have it wrong, because in fact it was my generation that really invented everything, back in the '80s and '90s, which is another piece of stupidity you always see.  That's what my parents' generation was saying to us, of course.  Like I said - and you'll just have to believe this, or not - I've been a cranky old man since I was 20. 16, more like, when I realized that my generation's hipster rebellion (postpunk) was in essential ways a repeat of the previous generation's (hippies), which was a repeat of what went before that (beats), and that (flappers, anarchists, etc.).  That's the curse, I guess, of having developed a historian's mindset at an early age:  while I was always intensely conscious of being in my generation, I never managed to feel completely of it.  Too much awareness that little of this was new, that what was new wasn't always necessarily what was best, and that therefore the world we were going to make wasn't necessarily going to be better than what was made for us.