Kazuo Ishiguro's An Artist of the Floating World (1986) 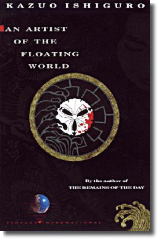 You know, kiddies, you shouldn't take everything Wikipedia says as gospel. For example, the entry on this novel is currently nearly a hundred percent bullshit, and it sounds like plagiarized bullshit to boot. But I'm not here to argue with Wikipedia; besides, that would be like wrestling with the sea.

What's interesting reading this novel right after A Pale View of Hills, which I did this time, is to see how much this is a logical progression from its predecessor. The main character here, Ono, is essentially a reformulation of Etsuko's father-in-law there. I.e., he's a retired man whose career was at its height during the war, a war whose values he supported and helped perpetuate through his work; and now, after the war, he has to confront the fact that a lot of people resent him for helping to bring about the tragedy through which they're now living. Ishiguro has taken a background character and theme and moved them into the foreground. In that sense, as well as the fact that they're his only two novels set in Japan, they beg to be read together.

I have some of the same frustrations with this as I had with his first book. His depiction of his Japanese characters often reads, to me, like an Englishman's more-or-less stereotyped imagining of Japanese people, rather than the real thing. This sense is particularly acute when I think of Ono's daughters, Noriko and Setsuko (patterned, of course, after daughters in Ozu movies). The deference and indirection with which they address their father is carried to such an extreme that it's really hard for me not to read them as caricatures...

Similarly I find his depiction of Japanese society as a whole problematic. Not wrong - again, I wouldn't go that far. But I'm not sure about the aesthetics he portrays Ono as espousing. On the one hand he's an artist, like the title says, "of the floating world" - i.e., someone trained in the finer points of aesthetic hedonism, the bittersweet enjoyment of sybaritic pursuits. On the other, he made his name with rabble-rousing fascist propaganda art. I'm not saying it's impossible for one person to evolve from one to the other, but Ono is portrayed as e 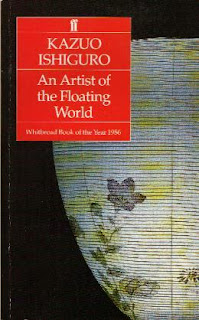 mbracing both, and I'm saying that this is a far more uneasy union in reality than Ishiguro manages to evoke on the page. There's a lot more to be worked out here than the book succeeds in working out; Ishiguro may well be aware of this, but for whatever reason, he doesn't really go there in his writing. As a result, Ono's aesthetics feel like two more stereotypes thrown together facilely.

That said, the novel still works on a psychological level, just like the first one. It's another excellent examination of how we lie to ourselves, rationalize away our guilt, and again it's couched in an effective first-person performance. We watch the process of rationalization in real time, as it were. This, of course, was Ishiguro's early specialty.
Posted by Tanuki at 3:50 PM No comments: