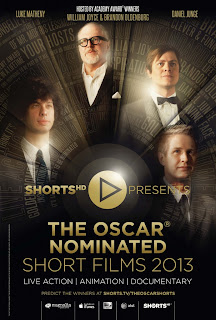 One of the most enjoyable movie experiences Mrs. Sgt. T and I have ever had was catching the Oscar-nominated animated shorts for 2008 in an omnibus showing in Boston in early 2009, on a big screen.  So I don't know why we didn't get around to trying to do the same thing again until this year.  Probably just got busy.  Life, work.

But the Bijou was doing the current batch this weekend, and we happened to find out about it, so we went.  And again it was a great evening.  But this time around the crop of nominees seemed really dominated by a big-studio aesthetic.  Two were actually from big studios:  "The Longest Daycare" is a Simpsons thing, of course, and "Paperman" is the Mouse.  But even beyond that, "Adam and Dog" has a very Disney aesthetic, and "Head Over Heels," while not quite as mainstream in its look, is still pretty straightforward in its storytelling.  Only "Fresh Guacamole" has any of the wild visual experimentation that this genre is capable of fostering.

The best two were among the also-rans tacked on to make you feel like you'd gotten your money's worth.  "Abiogenesis" was a little anachronistically tech-y - Mrs. Sgt. T said it felt like the early days of CG when animators would make lots of robots because they could - but it also had the most imaginative visuals of any of the films;  it felt anachronistic in that way, too, like it had a sense of wonder that maybe we don't do much anymore.  And "Dripped" was brilliant:  a snappy little fantasy explanation for an enigma that shall remain nameless, lest the effect be spoiled.  Be surprised.
Posted by Tanuki at 6:02 PM No comments: