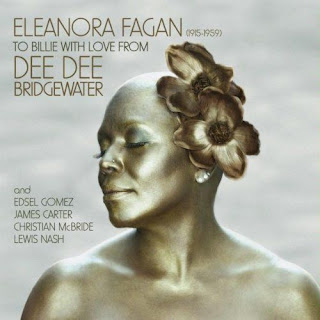 seems to be the official title of this album.  I think part of why I love Dee Dee Bridgewater is that she's crazy.

I kinda mean that.  She's got incredible vocal agility, an amazing command of tone and timbre, and a Method actress's command of emotiveness.  And part of the fun is that she'll throw it all into one song, one chorus, one phrase.  She'll move from ironic presentation of the melody to gutbucket belting of it in one turn of an ankle;  she'll move from high society delicacy of diction to slippery, fleshy growls in one flick of the wrist.  Vocally she can't stand still, and it all adds up to a kind of Whitmanesque craziness:  she contains, and voices, multitudes.

That fecundity, though, tips her vibe over into sex.  She can be as intellectual as Nina Simone, as artistic as Betty Carter, as pure-music as Ella Fitzgerald:  but it's all grounded in this physicality that links her to the earliest jazz singers, Bessie Smith, Ma Rainey.  It's an element that one suspects black female jazz singers (and how's that for a generalization!) have been trying to transcend for generations.  But it's the 21st century now, and Dee Dee can do what she wants.  That's the point.

"Strange Fruit."  You gotta have balls this big to tackle this one.  But what survey of Billie Holiday's artistry would be complete without it?  So she does it.  And she realizes that the only way to do it is the opposite of how Billie did it.  Billie could afford to undersing it, to keen calmly and allow the lyrics to horrify.  But we all know the story, we've all felt that nausea, that terror.  For Dee Dee to make it new, she has to sing all that extra nausea and horror we expect from the song.  It's the only track on the record, incidentally, where she approximates Billie's tonality, and it's no doubt intentional:  she gives us the notes, the Gothic tremblings, that Billie didn't sing.