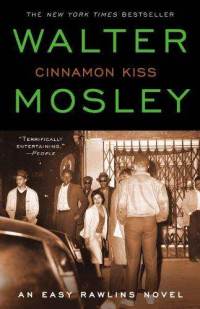 It's 1966.  Easy's a licensed PI now.  He's got uneasy but real relationships with members of the LAPD, and with a white PI.  California's got hippies now.  Easy goes to San Francisco, to Berkeley, and meets some.

Easy Rawlins is getting old now.  We're getting into times that his creator (b. 1952) would remember for himself, and meeting characters - including the book's eponymous femme fatale - who are almost young enough to have been people Mosley knew.  But Mosley stays true to his protagonist's perspective.

Take this encounter (p. 86 of my copy).  Easy's in a Haight legal-aid center, and in the waiting room with him is a woman who speaks "in a white Texan drawl I knew and feared."  But he helps her with her unruly child.


"Thank you, mister.  Thank you," the mother was saying.  She had lifted her bulk from the lawyer's folding chair and was now taking the grinning boy from my arms.  I could see in his face that he wasn't what other Texans would call a white child.

The woman smiled at me and patted my forearm.

"Thank you, she said again.

Her looking into my eyes with such deep gratitude was to be the defining moment in my hippie experience.  Her gaze held no fear or condescension, even though her accent meant that she had to have been raised among a people who held themselves apart from mine.  She didn't want to give me a tip but only to touch me.

I knew that if I had been twenty years younger, I would have been a hippie too.

Easy never lets us forget that prior to being an Angeleno he was and is a Texan, and his understanding of the world and his place in it is conditioned by his Houston experiences as much as his Californian.  So there's a special familiarity whenever he encounters a fellow transplanted black Texan, and a heightened tension whenever he encounters a transplanted white Texan.  It's happened before in the series.  Texans, Louisianans - Easy's LA is full of them.

That's what lends this encounter with a nonprejudiced white Texan woman such power - he's steeled himself for hostility, but encounters only acceptance.  These later books are full of encounters with white people that don't go as Easy had expected - some go worse, but some go better, like this one.

But here's what I mean by Mosley being true to Easy's perspective.  The book's eponymous femme fatale is young, black, and well educated, and seems to have more confidence in the white world's acceptance of her than Easy does.  And so, perhaps, she appreciates it less - and I don't mean "appreciate" in the sense of feeling gratitude, but in the sense of understanding its significance.  Easy fully appreciates how revolutionary it is that this young white Texan mother - of a mixed-race child (like, we know, Easy's own daughter) - greets him with simple human warmth.  And it's that, rather than the romance of rebellion or spiritual abstractions or the pleasures of turning on, that he sees as the hippie movement's main promise.

And notice the reticence that comes with age.  He would have been a hippie if he was younger.  Meaning, because he's older, he won't be.  Partly because, obviously, he's got a family and responsibilities he can't just drop out on (everything in this book, in fact, is driven by his urgent family responsibilities - he's got a sick daughter and has to raise money for her treatment).

But also, one suspects, because he's wary enough not to jump into anything.  A young man might take this one encounter as indicative of a whole scene, but he can't.  And, indeed, in the following book Easy encounters a guy who to all outward appearances is a hippie but who treats him with all the surliness and violence of any redneck ever.  People change, but not all of them, and not all at once, in these books.
Posted by Tanuki at 10:57 PM No comments: