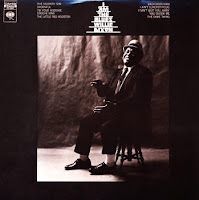 At the end of the '60s, Willie Dixon left Chess Records, which was circling the drain anyway.  Having performed in a kind of desultory way all throughout his years as a songwriter, session man, and A&R man for Chess, he stepped up as a performer, recording a number of albums as a leader beginning in 1969.  The new Willie Dixon website lists them, and there are more than you'd think in the '70s.  I say that because the only one of them in print is 1970's I Am The Blues.

I suspect that what we have here is record company muscle, pure and simple.  The others were on small labels:  Dixon's own Yambo, or Ovation.  But this one's on Columbia.  Everybody seems to agree that it's no great shakes, but it's still in print;  Willie Dixon is a name, and Columbia is a name, and so it sells.  Without the others as a context, though, it's hard to know quite what to make of this record.  The roster of players is stellar (although you wouldn't know it from the CD, which leaves out all such frills as musician info):  Sunnyland Slim, Walter Horton, Johnny Shines.  But was this Dixon and the band at their best?  Or just their safest?

It's not bad by any means.  The backing is solid, and at times nearly definitive;  the arrangements are loose but careful, at least attempting to give these chestnuts a fresh look.  And I won't even take Dixon's singing to task.  He doesn't have the power of Wolf or Muddy, to be sure, but there's a wry intelligence in his voice that almost compensates.  He wrote these lyrics, some of the best ever written, and he sounds comfortable singing them.

I think what underwhelms me about this album is the feeling that, in 1970, it's so far out of time.  It's hard to know what an old bluesman could have done in 1970 to sound right, though;  Electric Mud is as scary as you'd think.  Were the only choices an embarrassing capitulation to young, mostly white trends or an embalmed classicism?  This isn't quite the latter, but close.  It sounds like music made on a Thursday morning when the rest of the world is at work and you're not.  Not like a stolen rest, more like a befuddling idleness.

This version of "The Same Thing" I do love, however.
Posted by Tanuki at 12:32 AM No comments: Impulse! has more cachet than Verve.  It was and is a cooler label.  It's a fact - don't try to argue.  And Oliver Nelson's 1961 album The Blues And The Abstract Truth, on Impulse, is his best known.  I won't argue with that:  I've had it for nearly twenty years and it's never failed me yet.  "Stolen Moments" pretty much defined my sense of what was cool in my twenties.

This disc draws from three albums Nelson recorded for Verve in the '60s, plus a few rarities.  It's a good next step after The Blues And The Abstract Truth.  And more of this chronically, criminally underrated musician, arranger, and composer is always welcome.

He was a man out of time, is what Oliver Nelson was.  He wrote cool jazz for biggish, and outright big, bands in an age when cool jazz was played by small, lean combos, while big bands tended to the lush, the Latin, the goofy, or the nostalgic.  Nelson was none of that:  his music certainly has a lot of Duke in it, and a sense of adventure in the instrumentation that betrays an awareness of Evans, but he's more in tune with Coltrane and Miles than anything from the swing era.  He's about thirty years ahead of his time, in other words.

(You want evidence that Impulse! has more hip value than Verve?  How about this:  I can't find anything from this album to link to on youtube.  But all of Blues and the Abstract... is there.  But:  choice tracks are "Full Nelson," from 1962, which is almost as coooool as "Stolen Moments";  "Ricardo's Dilemma", which is a lot more rewarding than a straight cop of Coltrane's "My Favorite Things" should be;  "Complex City," which has Stravinsky taking the A train;  and "Patterns For Orchestra", one of the rarities, which is probably the best place on the disc to hear Nelson's ingenious combination of a hot '60s rhythm section [Albert Dailey on piano with Ron Carter on bass and Grady Tate on drums] with a high-gloss orchestra.)
Posted by Tanuki at 10:44 PM No comments: