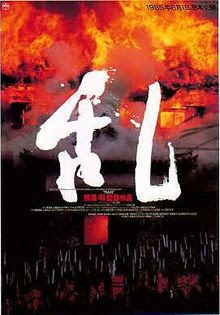 Ran (1985) didn't start as one of my favorite Kurosawa films, but every time I see it (and I've lost count of how many times that is) I discover more depths. What kind of depths? The same that I find in most of his films: visual compositions that suggest character, or unarticulated meanings. Not to mention startling beauty.

This time I was struck by his handling of the sequence of Hidetora's madness, and how his fool Kyoami (one of the wonders of the film is how successfully AK maps Shakespeare's fool onto medieval Japanese kyogen performers) treats him.

Specifically I'm thinking of the scene in the grass under the sunlight next to the ruined castle of Tsurumaru's clan, and then moment when Kyoami puts on Hidetora's head a helmet woven of grass, with two yellow flowers as a crest. This detail is, of course, a reference to the performance tradition that has Lear wear a daisy-chain crown during his madness on the heath. But there's more to notice about it than that. 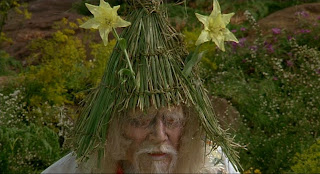 First there's the change of the crown to a warrior's helmet. This is only in keeping with the change of setting: a medieval warlord wasn't a king, and Japanese rulers didn't wear crowns anyway. And it's surprising how natural the grass helmet looks - like it was Kyoami's idea, rather than one borrowed from another culture in another century.

And part of that naturalness is that the grass helmet resonates with the Japanese poetic tradition. Particularly it called to my mind (this time, finally) two verses by Bashô that Kurosawa would most certainly have been familiar with, since they're among the most famous in the language. Both come from the great poet's haiku travelogue Narrow Road to the Interior, and they both come from moments when Bashô has visited places associated with great medieval battles and the generals who fought them.

At a now-peaceful battlefield, Bashô writes (my translation; everybody's got his or her own):

And later, viewing a helmet worn by a famous warrior of yore:

Cruel!
under the helmet
a cricket

I submit that with Hidetora's helmet made of grass, a helmet covering a warrior now reduced to (reborn as?) a chirping simpleton, Kurosawa is invoking these poems, and the whole discourse on the transience of martial glory that has attached to them over the centuries. An eminently appropriate interpolation to Lear, but more importantly a way of enriching Kurosawa's own take on war and warmongers.

By this point, Kurosawa - for better or for worse - has ceased trying to be an entertainer, and is allowing himself to try to be an artist on the fullest scale he can imagine. This is, to be sure, responsible for some of this film's imperfections - but it also allows him to realize masterful moments like this one.
Posted by Tanuki at 4:20 PM No comments: