Jazz At Lincoln Center Presents: The Fire Of The Fundamentals (1994) 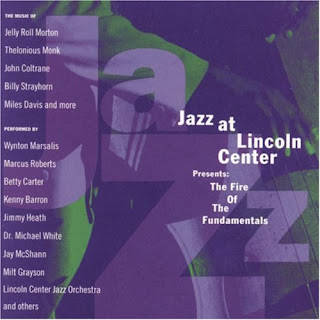 So I'm in a groove (or is it a rut?) (sorry, Peart) with these Lincoln Center Jazz Orchestra discs. Collect 'em all. This is their second, and it's not technically an LCJO disc; it's a compilation of things that happened during three seasons of Jazz at Lincoln Center, the organization's home stand, and this means that some of the tracks are by the home team, and some are by visitors.

The only Orchestra pieces proper - the only big band numbers, that is, - are the Charlie Parker number "Hootie Blues" (nice) and the inevitable Ellington, "Multi-Colored Blues" (nice, too).

But the highlights are not the Orchestra pieces, but two numbers by what seem to me to have been subsets of the orchestra, an octet and a septet, both led by Wynton Marsalis and largely if not entirely filled out with Orchestra members.

The first of these highlights is the number that kicks off the disc, the Jelly Roll Morton tune "Jungle Blues." This is just a monster groove, is all. Drums, piano, guitar, and tuba all mashing on the beat, with brass and clarinet getting just as filthy as they can. This is true Storyville stuff, real bordello blues, and with the pristine recording technology and room of the '90s you can begin to understand just how and why the old records were supposed to work. I mean, it's still possible to appreciate Jelly Roll Morton records today, Louis Armstrong, King Oliver, and all the rest of those New Orleans gentlemen, but here things become clear in a different way. You can hear the space and balance between the horns, the rhythm section, the one woodwind. It starts to color in a picture that was only in sepia before, of a wanton woman, that licorice stick, dancing shrill and sunken in siren abandon, surrounded by the gruff, gasping growls of the horns. So that's what it was all about. Always was.

The second highlight is much more on the spiritual side of the spectrum, a cover of Coltrane's "Dahomey Dance." I confess I haven't heard the original of this yet, but the cover is brilliant. Marsalis's trumpet is cool and focused, the saxophones manage to evoke Coltrane without sounding too much like they're trying to ape him, and the bass duel sends shivers up the spine. It doesn't scale the hot heights of delirium that Coltrane was wont to; rather it brings out the cool '60s vibe that was always implicit in his work, and more explicit in contemporaries like Horace Silver.

From Jelly Roll to Coltrane and several points in between: the diversity of the disc is an eloquent testimony to the mission of the LCJO. Persuasive, and that's key this time around, because the trappings of this disc, from the PBS-y cover art to Stanley Crouch's even-more-pompous-than-usual liner notes, give the project the whiff of the textbook, or the school field trip. Y'know, it's Culcher, and you kids better appreciate it. Luckily, the music gets beyond all that.
Posted by Tanuki at 11:18 PM No comments:

Went to see the Lincoln Center Jazz Orchestra (or, as Wynton Marsalis his very own self said from the stage, the Jazz at Lincoln Center Orchestra: is there a difference) last Thursday night at the Hult Center in swanky downtown Eugene.

Preamble: I don’t go to many concerts. I like music too much, and most concerts, at least of the rock variety, are pretty unmusical events, with lousy sound, noisy crowds, and harrowing atmosphere. Every once in a while I go to one, though, and as it happens this was my second time seeing the LCJO (or J@LCO). With Wynton Marsalis.

The first time was in 1995 or possible 1996, in the Marriott Center at Brigham Young University in Provo, Utah. I was an undergrad there at the time. The concert, as I recall, was not very well promoted. I only found out about it a couple of days beforehand. I asked a couple of friends if they wanted to go, they said yes, and we bought tickets that afternoon. We got alarmingly good seats, for that late: not on the floor, but only a few rows up in the stands.

The warning signs were accurate, because when we showed up it turned out that almost nobody else did. In this college town of forty thousand or so, they hadn’t even sold out the floor. So everybody in the stands got to come down and sit on the floor. We got to sit in, if I recall, the second row. I was ashamed for my town, but also kinda glad.

And it was awesome. I didn’t know jazz from a hole in my head at that point, but I had a sort of ignorant worshipful reverence for it, particularly live, a seed that had been planted by reading Kerouac and watered by a summer full of jazz in Nagoya the year before (I saw Mukai Shigeharu, Yamashita Yôsuke, and Ônishi Junko in one glorious season). Tonight it… Well, let’s abandon that metaphor and just say it was a pretty damn electrifying concert that ended, if my memory serves me well, with Wynton and some of the other horns marching around the stage and the aisles in a sort of N’Awlins parade…

So, when Mrs. Sgt. T and I saw the ad for the performance in the Hult, we jumped on it.

A very different experience. The Hult is a nice place to see a concert: good acoustics, classy atmosphere, but with Eugene casualness and unpretentiousness. And the place was pretty full; not packed, but respectably populated. I didn’t feel alone, that’s for sure.

I know a little more about jazz at this point, but the tree is still kind of slender, not strong enough yet to really climb on to pick the higher-hanging persimmons. That is, I still managed to listen to them playing a slow bluesy thing in the middle and think it was a Mingus number, only to have Wynton explain afterwords that it was, in fact, a WC Handy blues. Dayum.

They were playing with us. In the first half, they did a song written by Fred Rogers. They followed this up with a Mingusy (I swear!) arrangement of “Itsy Bitsy Spider.” This was a highlight actually, marked by some really odd rhythms and intriguing combinations of instruments – piccolo and muted trumpet, for example.

But the climax of the show, inevitably, was when they pulled out some Ellington to end with. A magnificant rendition of “The Tattooed Bride,” particularly nailing the clarinet fantasia at the end – you think Eric Clapton invented that furious beginning/ethereal ending thing with “Layla”? Wrong. And they followed this up with “Portrait of Mahalia Jackson.” Sweet Jesus, that was nice. Pure gospel soul grind in the jazz idiom.