The primary trend we noticed with Tull Mk. 2 continues here, and would continue forevermore: the music seems to be entirely Ian's concept, not a band thing at all. It kind of gives the lie to what I'm trying (halfheartedly, occasionally) to do, which is think about each successive lineup as a band... But there it is.

Anderson himself gives us the key to understanding this edition of the band, in the liner notes to the 2001 reissue of this lineup's only album, Benefit. He writes that with the addition of Evan, "the resultant thickening of the musical textures allowed guitarist Martin Barre to focus more on monophonic riffs and solos rather than worry about banging away at chords most of the time."

Those of us who aren't musicologists can probably hear what he means in this lineup's best-known song, "Teacher."* The main riff on this is not quite monophonic - I believe Martin's playing a chord there - and in fact it's backed by the piano and bass, but at the same time it's a lot more out front than most of what Martin was doing on Stand Up. He's developed a sound here, a style: hard and focused, even a little heavy, a nice foil for the frilliness of Ian's flute lines. Certainly there's still a variety of things going on in Tull's music at this point, but Martin begins to take on this defined role right about here.

The album: to my ears the big advance in Benefit is in production. The album sounds clean and open in a way th 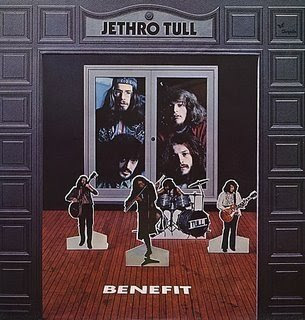 e last ones didn't. Gone is the coy mustiness of the first one (and very charming it was, too), which lingered over a bit into the second one. Here everything's more immediate. Take for example my favorite passage on the album, the one-two punch of "Son" and "For Michael Collins, Jeffrey, And Me." Both of these show off Anderson's new Idea, which is combining the idyllic acoustic stuff and bruising electric stuff in one song (wow, dude). They do it extremely well, too, perfectly realizing the father-son shouting match of "Son," and blending it into the escape fantasy of "Michael Collins." But more than the thematic appropriateness, consider the bite of the electric guitars, the very present strum of the acoustics. Very nice. This would be the sound of Tull for a very long time.

Not that every bit of the past had been jettisoned. Clean sound, for example, is dispensed with in one key aspect of "To Cry You A Song," whose ravenswing depressive guitar pattern 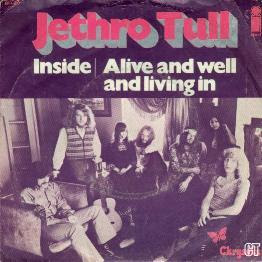 is overlaid with a very dirtily-recorded vocal, to ravishing effect.

Unlike its immediate predecessor, this album is only about half memorable; the other cuts I go back to are the acoustic closer "Sossity; You're A Woman" (in spite of the unforgivably jejune wordplay of the title: sossity=society, and he even spells it out at the end), the groovy little dance number "Inside" (which actually sounds like it was played by a band, and contains some of Cornick's finest work), and "Nothing To Say" (which is just this much shy of being an anthem of some sort).

This lineup's best work really came on the non-album stuff. This included the jazzy little "Singing All Day" as well as the reworked live "Dharma For One," both of which showed up on the 1972 compilation Living In The Past (the latter was an instrumental on the first album but grew lyrics later). Let's not forget the lush, romantic "Witch's Promise," either, probably Tull's best non-album track yet. Tull were a singles band up through this period, although that would all change with the next record.

"Witch's Promise" is worth a closer listen. In mood and subject matter it fits in perfectly with the mystic-folk strain that was starting to come to the fore in British rock in this period (viz. Fairport Convention, second-period Traffic, Led Zeppelin); Tull would always keep a toe in that pool, although Anderson's vision was 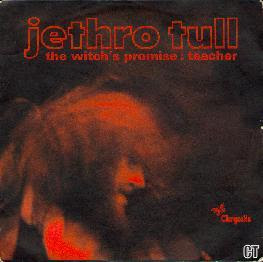 always much too cerebral to allow him to get really carried away with the white-witch stuff. But this song also boasts some really nice ensemble work. Most of it is Anderson: that's probably him on acoustic guitar, although Martin may be in there too, and of course that's Ian on flutes. But listen carefully and you'll hear really tasteful piano doubling a lot of the melodic lines. Clive contributes some gentle percussion work, and Glenn's bass comes to the fore with some nice woody lines. And then - heavens, is that a mellotron? Is prog rearing its ugly head?

*The b-side of "Witch's Promise" was "Teacher" - great a/b, that. And therefrom hangs a tail. The song was originally only released as a b-side in the UK, and not on the album; but it was added to the US version of the album. However, these seem to have been two different versions. I'm not entirely sure which is which, however. The familiar version is the one that's on the 2001 Benefit remaster, where it's included as a bonus track (because the album follows the original UK configuration), and labeled "original UK mix." But there's another version of the song on 20 Years of Jethro Tull, and this is labeled "b-side of 'Witch's Promise' UK single." I suspect what's going on is that the 20 Years version is the actual b-side, and the more familiar version (the only one you ever heard on the radio) is actually the US album version: it's the one that was on M.U. and other compilations. This may sound needlessly obscure, but the thing is, the 20 Years version is great. It's a little slower, and instead of flute it has a little more Hammond organ, and another guitar part added, a little raunchy, melancholy figure. Not huge differences, but they make for a sharply different mood, and suddenly it's a whole different song. The standard version is great, too, with that classic punchy riff, but the alternate version is so... seductive is an overused word, especially for outtakes, but this deserves it. I'd hate to have to choose between them.
Posted by Tanuki at 6:49 PM No comments: