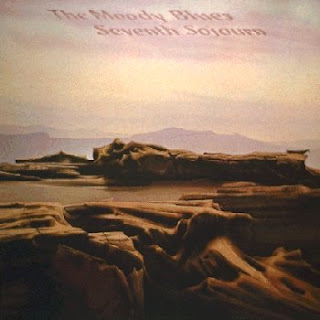 Their seventh album, and the last of the Moody Blues' main sequence, was the aptly, if unimaginatively, named Seventh Sojourn (1972). The blandness of the title - and, probably, the barrenness of the landscape on the cover - suggested what was going on with this record. The band was tired, out of steam, and basically, whether they realized it at the time or not, at the end of its run. After this they'd go on hiatus, and although they'd have some hits, and some worthwhile songs, after their comeback, it was never quite the same again. For one thing, the lineup would change: they literally weren't the same band anymore after this.

It's good, then, that they went out on a high note. This is their strongest album since their fourth, and in some ways (not all) it might be their strongest overall. A side-effect, I think, of their fatigue is the fact that this album contains no poetry, no multi-part suites, no musique concrete: just songs. And it's a stronger album for that, even if it risks becoming a bit generic.

It helps that just about everyone is contributing his best work. Pinder - the one who wouldn't come back from the hiatus - launches the record with the remarkable "Lost In A Lost World." The first thing you may notice with this track is how downbeat it is for Mike Pinder - all the optimism and enthusiasm that have heretofore marked his work is gone, replaced by a world-weariness and even desperation that nevertheless make for some bracing art. It's a pessimistic song, but it doesn't rage: it sighs and mutters. And those sighs and mutters are set to, of all things, a disco beat - four or five years ahead of its time, and of course not as Philly-smooth as disco proper would be - but a very solid, very steady beat that, under other circumstances, would be deliriously danceable. Here the delirium is a little less salubrious, the strings less ecstatic than elegiac; it's a tour de force, really.

Edge, as a composer responsible for many of the band's worst moments in the past, graciously confines himself to a single co-writing credit here: he and Hayward come up with "You And Me," largely a rewrite of "Up To You," but with more rock elements.

Thomas only gets one number, and it's the apotheosis of the whimsical vein he worked so regularly. "For My Lady" seems to have come straight out of an imaginary rock-musical version of Don Quixote, set to a sea-chanty melody - comically dignified knights in armor serenading their ladies love, while hearty sailors rum-tum-tum behind. But as silly as it sounds, it really works - it's a beautiful number.

Hayward is as good here as he always is: it's no wonder he went solo after this, because he's clearly the one real major-league talent in the band (although his lack of real solo success suggests that he couldn't carry the weight alone). "New Horizons," his major contribution, basically sets the pattern for adult-contemporary ballads twenty years later, right down to the expert, soaring, searing chorused guitar solo. It's perfect - far too much so to have been written by a singer in a rock band, one feels. It's almost a Diane Warren number. There are no rough edges to this cut at all.

Seventh Sojourn's most pleasing surprise is that it finds John Lodge finally, finally, reaching his full potential as a songwriter. One wants to say he's returning to form - a couple of his songs on their early albums were gems of psychedelia - but his work here sounds nothing like that. "Isn't Life Strange" is a top-notch ballad, as haunting as Justin Hayward's best work, but with a classical ambition Hayward never displayed: the tune echoes Bach, and the arrangement, heavy on strings (Chamberlin strings), makes it almost a chamber piece. It's a masterpiece.

And it's only exceeded on the record by Lodge's other composition, the closer: "I'm Just A Singer (In A Rock And Roll Band)." This is one of the band's heavy-rotation classic-rock-radio hits - as familiar as "Questions" and "Nights In White Satin." And like them, its impact is undiminished by repetition, because it relies not on flash or attitude, but on a crafty arrangement, a solid structure, and passionate playing and singing. It's also perhaps the band's hardest rocker ever, with a truly searing guitar solo and a bruising Chamberlin-horn-section part. And, on top of all of that, with the way it ends, slamming on the brake and skidding to a halt, it's a perfect closer to their career - a downer, to be sure, professing defeat and retreat from the job of proselyting for love and peace. But effective.

Seventh Sojourn is the sound of a band that has grown up. One wonders what they could have accomplished if they'd managed to get their second wind and continue in this vein, rather than dissolving. Because when they came back, they'd be committing themselves to forever chasing past glories, trying to demonstrate that they were still the same band.

Nothing lasts forever.
Posted by Tanuki at 11:56 PM No comments: 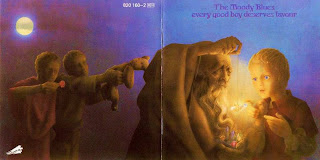 Of the Moody Blues' main sequence, their sixth album, Every Good Boy Deserves Favour (1971) is the only one I'd consider an actual failure. Song for song it's probably no weaker than two or three others, but it leaves a rather weak overall impression on me. One of indecision and lack of focus.

The rot starts with the first song, "Procession," which recycles the idea behind "House Of Four Doors," that of tracing the history of music (gawd) in the course of a single track. This time it's not quite a song - some musique concrete, some log-thumping noises, and a couple of vocal interjections imported from a song on Side 2. It's a step back toward prog territory, and, perhaps not coincidentally, a pretty insufferable track.

The closer, Pinder’s “My Song,” has some musical content, but it’s just as bombastic and aimless, just as much of a drag. Pinder’s enthusiastic, charmingly amateurish compositions were highlights of earlier albums, but with the growing professionalism of Hayward and, to a lesser extent, Lodge and Thomas, Pinder’s songs were starting to sound out of place. As were Edge’s – here he comes up with a full-fledged song, with melody, lyrics, and everything – and it’s groovy – in a kind of awkward way.

What does that leave? Hayward contributes two numbers. “The Story In Your Eyes” is a soaring rocker; it’s the second track, and it nearly redeems the first track to hear it resolve into “Story’s” focused majesty. Justin’s other, “You Can Never Go Home,” follows, roughly, the pattern of “The Actor,” passing through a number of disparate moods, each of which boasts perfect melodies, sighing harmonies, biting guitar lines. Perhaps a little too busy to stand with his best work, but it might be the most concentrated evidence of his almost McCartney-like craft.

Lodge, as usual, doesn’t seem to have settled on a style of his own. “Emily’s Song” is a pleasant but forgettable ballad that borrows considerable from Ray Thomas’s sense of whimsy. “One More Time To Live,” meanwhile, is Lodge’s best attempt yet at a Justin Hayward number – and it’s quite effective, too, with some very dramatic counterpoint singing in the refrain.

Thomas weighs in with “Our Guessing Game,” a little cloying in its bonhomie, and “Nice To Be Here,” which I find to be perhaps the most maddening song in the Moody Blues’ catalog. Not the worst – I’m not even sure I dislike it. I may, in fact, like it. It describes a jamboree – I shit you not – of woodland animals. “And the owl played his oboe / then the frog’s guitar solo / it was all too much for me.” As the liner notes say, quite Beatrix Potter. Thing is, the tune is pretty catchy, and everybody turns in some very nice playing: nifty fuzz-guitar lines, catchy sub-country rhythm work, mellotron cleverly evoking both the wind in the willows and a steel guitar. And the vocals are, as usual, choirboy impeccable. The song really works. And of course there’s good precedent for this sort of thing, with “Yellow Submarine,” for example; but whereas the Beatles even at their most whimsical always sounded like wise-ass rockers, hipsters simply trying on the clothes of old Victoriana, the Moody Blues were quite capable of sounding like the mustachioed old gent in the Sgt. Pepper cutouts. I.e., way out of time, and totally unaware of it.
Posted by Tanuki at 8:22 AM No comments: 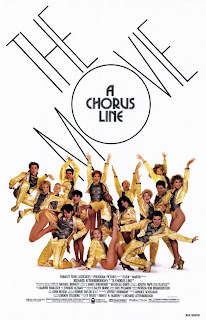 Mrs. Sgt. T likes musicals, on both stage and screen. She's been watching A Chorus Line lately (the 1985 Richard Attenborough film version), and yesterday I sat down and watched it with her.

I won't bother with a comprehensive review: it wouldn't mean much coming from me. Broadway is mostly lost on me, and so is dance. I wasn't even going to blog it at all, but this morning Mrs. Sgt. T asked me what I liked best about it, and what I liked least about it, and I realized that they were the same moment.

To wit, the big climactic musical number, "One." I hate this song. I hate its insipid melody and bovine rhythms. I hate its silly, glitzy lyrics. I hate that at the end of a long movie, this piece of expensive tripe is what we're supposed to climax to. I hate the whole gold-lamé jacket and straw hat style of production number. I hate the Rockettes, for Pete's sake.

As a sequence on film, though, it was the first segment of the movie that really caught my interest, though. It quite elegantly captures the subtext of the story - out of these disparate individuals (effectively individualized through the course of the story), the Broadway musical forges a group. They're many, but they move as, yes, "one." Irony: none of them, now, are a "singular sensation" - none of them individually is "one" anymore. And Attenborough presents it cleverly, with the mirrors multiplying the dancers, and the gradually receding camera accentuating the depersonalizing effect of the costumes... And with Cassie most of all we get a pitiful, pathetic picture of the dancer eager to depersonalize herself, to suppress her singularity so she can be part of that "one" - so she can dance.

I get it, I think. I.e., I can recognize that there's a lot of thought going into it, a lot of careful thematic arrangement in the story and characters as well as the music and the dance.