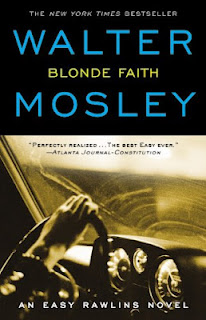 Fall term started up last week and I'm in a perpetual state of near-panic about my classes.  That explains the drastic downshift in posting frequency.  It'll probably be like that for a while, for what it's worth.

I read this knowing it was The End.  The jacket blurbage, the online reviews, everything was telegraphing that.  And, indeed, Easy dies at the end of the book.  That's no spoiler.

So I was all set to meditate on what it meant for the cause of black liberation that Easy couldn't make it out of the '60s alive.  But then I discovered that, oh, hey, looks like that wasn't the end after all.

And you know, that's fine.  Because of a number of things.  Most obviously, because the way Mosley wrote the end of this one it was clear he was leaving some wiggle room on the question of Easy's death (of course, it's always tough to have your main character die if he's also the one narrating the books - unless this is that fantasy story about pirates that I was trying to write in eighth grade where we get to the end and find out that the guy who's been telling us the story is a ghost!  cool, huh!  I bet it'll sell a million copies!  I bet it'll be featured in the Otherworlds club!)

Ahem.  But mostly because I didn't see any thematic necessity for Easy to die here.  The problems Easy was facing were tough, but tougher than '48 or '65?  I'm not sure Mosley made that case here.  In fact a lot of the tough issues he brought up in this one - Vietnam foremost among them - he didn't really resolve.  That is, the book didn't really leave me, at least, with a sense that we've gotten, through Easy Rawlins, a definitive statement from Mosley on how Vietnam affected the black LA underclass - that's what I mean by "resolve," since no real resolution is possible.  ...All of this is another way of saying that by this point in the series the milieu and Easy's negotiations with it are much more important than the individual stories.

So I'm interested to see where Mosley takes Rawlins next.
Posted by Tanuki at 8:44 AM No comments: