I've been reading some more Tezuka.  I teach him, he's major, and I should read more of his stuff.  I always feel that way, even though by this point I've probably read more by him than any other mangaka:  I've read Phoenix, Buddha, Jungle taitei Leo, Dororo, Shin Takarajima, all complete, plus several volumes of Black Jack and Mighty Atom.  That's enough to know more or less what I think of him, but of course there's always more, and since I teach him (in small doses), I should know it.  So, more Tezuka.

Ayako 奇子 was serialized in 1972-1973, and was, like Dororo, part of Tezuka's response to the more mature, adult-oriented manga that had appeared over the course of the '60s.  Even more than Dororo this one tries to escape the kiddie-comic ghetto that Tezuka had owned for so long.  This one's even more ambitious:  Dororo was working in established manga genres, while Ayako is a bid for comics-as-literature.  I.e., no samurai, no spaceships, no monsters;  a few gangsters, but mostly this is an attempt at realism.  Multi-generational family drama, set against the historical backdrop of postwar Japan. 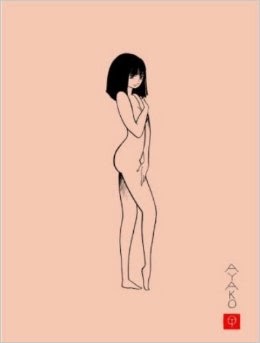 Dirty realism, or naturalism in the sense of dealing with humanity in a state of nature, unreconstructed, filthy and mean.  He's telling the story of a wealthy rural family in northern Japan that's resisting postwar land reform, and all kinds of democratic reform, by becoming more and more insular and inbred.  Literally.  It's a family at war with itself - we get murder, incest, rape, all sorts of nasty stuff.  All of this Tezuka ties to larger political things - not only the question of rural landownership, but also Occupation politics, spying, political corruption, and the Economic Miracle.  Whew.

I kind of wanted to love it.  I love the ambition.  But I didn't feel like Tezuka's heart was in it.  I know he loved the Russian novelists, and that this is supposed to have their grand scale, but the particulars of the story are largely drawn from contemporary Japanese film and/or fiction - Kurosawa's The Idiot and The Bad Sleep Well come to mind, along with Yokomizu Seishi's Inugami-ke no ichizoku.  And the lurid details of the family's degradation feel tossed in just for cheap thrills.  It all hangs together plot-wise, and Tezuka's smart enough that it's all nicely integrated in terms of subtext, but the nihilism feels unearned, adopted from early '70s underground manga because that's what the revolutionaries liked.

I read this in English.  I almost never read manga in translation, because, well, I can read them in the original.  But we happened to have this in English lying around, and I had a bout of insomnia, and I read it straight through in a day.  Interesting experience.  I read manga in Japanese, but not as fast as a native reader of Japanese can, which means that while I may be getting the same verbal experience, I'm not getting the same visual-verbal experience.  That is, I'm not apprehending the visual-verbal synergy at the pace at which it's designed to be apprehended.  That picture-and-text-at-a-glance thing that, really, comics as a medium is all about, I'm just a step too slow to really get when I'm reading in Japanese.  So it was interesting to read Ayako in English.  I kept wanting to check the original for language, of course, but meanwhile I felt like I was getting a more direct take on the comicsness of the thing than I sometimes do...
Posted by Tanuki at 1:15 PM No comments: