Am I being obsessive, or just thorough?  Either way:  boring, right?

So there's a film version of this, released in 2007 and also called Aruzenchin babā (The Argentine Hag).  It was directed by Nagao Naoki 長尾直樹, and it's the only film of his I've seen.

The best thing about this film is the decision to cast Yakusho Kōji 役所広司 as the dad. It works on a meta level, since the character already seems to echo Yakusho's character in Shall We Dance.  And more importantly, casting Yakusho almost saves the movie.  He's so damn handsome, so damn charismatic, and such a good actor:  his part here is drastically underwritten, and the characters he's interacting with are so tongue-tied, but the body language and speech mannerisms he gives his character make any scene he's in at least watchable.  With almost no help from the script or director he creates a character who's somehow both a working-class Japanese dad and a hippie, both impetuous and stolid.

Otherwise the film is too disappointing, and on too many fronts, to even bother exploring.  Among its crimes are:  failing to capture any of the spirit of Nara Yoshitomo in the visuals;  reducing the typically thoughtful, smart Banana narrator to a standard-issue J-film pouty-cute teenager (but without the difficult resonances of Nara Yoshitomo's pouty-cutesiness);  and rejecting, at the end, the novel's message of acceptance of the town cat-lady and all she represents about living.  (In the film, the Hag tells the dad that he has to go back to his daughter.  Rather than letting the daughter come to them.)
Posted by Tanuki at 11:33 PM No comments: 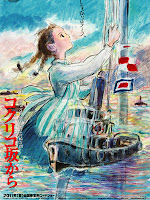 I can imagine Arrietty finding an audience overseas, but I wonder about this one:  Kokurikozaka kara コクリコ坂から (which seems like it's going to be released as From Up On Poppy Hill).  It's about kids - well, high school kids - and no doubt young anime fans will find a lot to enjoy in it.  But the tone is pretty grown-up.  It's very much an adult's nostalgic view of adolescence - and really an older adult's, with the longing for the Showa 30s that has gripped Japanese boomers for years now.  Maybe younger viewers in Japan can sort of approximate that point of view - but will it register with overseas audiences?

Maybe not;  maybe it doesn't matter.  The story is moving, and the animation is some of the most beautiful Ghibli has ever produced.  What's not to love?

It's about a girl named Umi, nicknamed Mer (a bilingual pun) who lives in a big house on a hill overlooking Yokohama Harbor in 1963.  Her father died at sea during the Korean War, and her mother is in America studying medicine;  Mer lives with her grandmother, her younger sister, and three single women boarders.  Every morning Mer runs a nautical signal flag up the flagpole in front of the boarding house, hoping in vain that her father will see it and return.

So, with the longing for the dead father and the absent mother, the story is awash in sentimentality, right?  Yes, it is.  If that's not your cup of tea, then this isn't your movie.  But if you appreciate a good flushing of the tear ducts occasionally, a deft pull on the heartstrings once in a while, this anime delivers.

At school she develops a crush on a guy named Kazama who lives in an old Meiji-era foreign-style mansion that's been turned into a high-school dorm.  It's called the Quartier Latin, and it's a fabulous creation, combining the kind of colonial-style Western-yearning grand architecture that can still be seen today on the Bluff in Yokohama with decades of accreted boy student embellishments, everything from theatricals posters to dismembered bicycles to ledgers that probably contain missing parts of the Dead Sea Scrolls.  This dorm provides one of the major subplots, as the owner, an absentee landlord living in Tokyo, has decided to sell it, and the kids decide to band together to save it.

The lightness of the Quartier Latin parts of the film nicely balances the sadness of Mer's story, and of course the two threads intertwine in effective, affecting ways.  You'll laugh, you'll cry.

And if you're like me (and just pray you're not) you'll be enthralled at how carefully the filmmakers work in period details.  The story starts out in what feels like fairy-tale territory, the kind of fantasized-Europe-in-Japan that the Borrower house in Arrietty embodies.  But gradually the story eases us into the realization that this is a very particular time and place being depicted - Yokohama on the eve of the Tokyo Olympics - and that the West-East fusions, the nostalgia-vs.-renovation themes, are all carefully accounted for by the specificity of the setting.  Right about the time you realize exactly where and when this has to be taking place, the story brings you to Sakuragi-chō Station, sits you down in a Tokyo publisher's office surrounded by Olympics posters and magazine covers (all quite recognizable), lets you walk by the Hikawa-maru at night.  An idealized glow permeates everything, but it only enhances the sense of locatedness that this movie provides.

I like Ghibli's kid movies.  I really do.  But I get most excited when I see the company pushing the limits of what animation has traditionally been considered capable of doing.  Omoide poroporo おもひでぽろぽろ (Only Yesterday) might be their greatest achievement in this regard:  while kids appear in the story, it's all about an adult woman thinking through events in her childhood in order to make sense of her present-day situation.  That all this is accomplished, with perfect subtlety, through animation is a remarkable achievement, and what's more remarkable is that some parts of the story are told much more naturally than they could have been with live action.  It's an argument in favor of animation as an art form unlimited by age, subject, or theme.

Kokurikozaka kara is almost like that.  The story is all about adolescents, and nostalgic perspective aside there's no adult consciousness in the story reminiscing.  But still, thematically it's working on a more mature level than anything Ghibli's done in years and years.  It's a major work.
Posted by Tanuki at 8:19 PM No comments:

Catching up on a few Japanese films we'd missed.  I hadn't heard anything about this - it came out just after our Japan trip last summer, and somehow none of our family or friends in Japan had been talking about it.

Which is odd, because we normally keep up on Ghibli.  Sometime I mean to write a series of posts about all their films - I've seen them all, and loved most of them.  Our opinions were kind of mixed about Ponyo, I guess, and worse than mixed about the couple before that, which may be why our breaths weren't particularly bated for this one.

The Japanese title is Karigurashi no Arrietty 借りぐらしのアリエッティ, which literally translated to "Arrietty the Borrower," although it looks like it's going to be released overseas as simply Arrietty.  Anyway, we were a good ten minutes into before I realized:  dude, this is The Borrowers.  Which I haven't read since I was, like, ten, and haven't thought about in just about as long.

So anything I say about it as it relates to the original (and to English-language film adaptations - I remember seeing one as a kid, evidently this one) is based on ancient memories, right?  But here goes nothing.  I remember the original as being pretty jokey about the Borrowers - like, aren't these quaint little folk?  This film doesn't do that.  It doesn't look down on them.

So when the dad goes out borrowing he's not some odd little cod-Victorian pilferer - he's a stern paterfamilias braving ever-present dangers to go hunting for his family (the concept works even better in Japanese than in English, since the verbs for "to hunt" and "to borrow" are homophones).  He's kind of heroic, and so you can easily see why Arrietty looks up to him so much.  The father-daughter relationship is really at the heart of this film (and, come to think of it, at the heart of a lot of Ghibli films).

The human boy, meanwhile, comes off as a kind of Keatsian figure - we don't know if he actually writes poems, but his illness is handled with a kind of wan picturesqueness that makes his crush on Arrietty quite believable. It meshes perfectly with the lush romanticism of the setting, which makes a rainswept backyard feel like Eden and a cobwebby crawlspace feel like a Roman ruin.

The depiction of nature in this film is one of its chief delights.  It makes for some nice gags, as we hear them referring to the lawn as a forest, but mostly what we get are views of the fairylike Borrowers in close communion with flowers, leaves of grass, raindrops:  I hadn't looked at grass with this much wonder since I was, well, since I was almost young enough to read The Borrowers.  Pay particular attention to the way the film treats water:  the jewellike texture of raindrops or dewdrops when seen close up, and the way the animators decide not to scale down the effects of surface tension, so that when Arrietty's mom pours a cup of tea it comes out as one big droplet.  Very striking.

Arrietty herself, of course, is another in a long line of strong Ghibli heroines;  I'm not sure, on one viewing, if I could say what if anything differentiates her from Nausicaa or San or Fio.  Which doesn't meant she's an ineffective center for the film:  she's just as winsome as the others.

It's on the kiddy side of Ghibli's output, to be sure, but it's one of their better ones.  And it's probably the best of their attempts so far at adapting a foreign story (if you don't count Spirited Away as an adaptation of Alice in Wonderland).
Posted by Tanuki at 6:49 AM No comments: