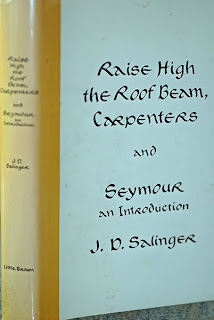 Finally, some Salinger I haven't read before; I can do away with those cutesy reminiscences (what was stopping me before?)...

Out of everything I've read so far, "Roof Beam" is my favorite. It cuts real deep. It gets at what's undoubtedly one aspect of the Great Ache of Existence, which is that if you use all your God-given faculties to make the best of yourself and this life, really try to learn and grow and aspire, you're bound to come off to other people as snooty, snobby, aloof, superior, precocious, pretentious, holier-than-thou, spiteful, judgmental, and ill-adjusted, which is to say that the more you learn, the more you become, the more you alienate yourself from your fellow-beings. This is inevitable: to learn to know the good is to learn to recognize the bad, and once you start seeing the bad that other people don't see you've started to set yourself apart from them.

As Salinger has Buddy quoting Seymour as quoting himself having said to somebody else (p. 74):

I'll champion indiscrimination till doomsday, on the ground that it leads to health and a kind of very real, enviable happiness. Followed purely, it's the way of the Tao, and undoubtedly the highest way. But for a discriminating man to achieve this, it would mean that he would have to dispossess himself of poetry, go beyond poetry. That is, he couldn't possibly learn or drive himself to like bad poetry in the abstract, let alone equate it with good poetry. He would have to drop poetry altogether. I said it would be no easy thing to do.

And that's what Salinger is positing in Seymour, in "Roof Beam" and "An Introduction": that he managed to combine the spiritual and aesthetic discrimination of all the Glass children with the perfect love that none of them seems able to reach, though they all try. Seymour did, and that's why he's a saint.

But like most saints, he's dead, and not around to help us anymore, and to even try to comprehend him is a next to impossible task. That seems to be the message of "Seymour: An Introduction," the most explicitly spiritual work of them all, and at the same time the most quotidian, the most stymied.

I found it a very funny work, a 20th-century Tristram Shandy, obsessed with its own inability to get started, to say what it's trying to say it's trying to say, only instead of Enlightenment rationality as its unreachable, ever-receding goal, it's the Beat vision of the saintly man.
Posted by Tanuki at 4:47 PM No comments: