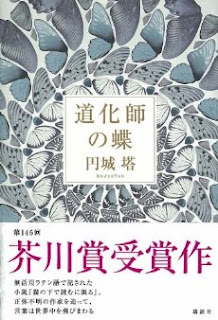 Dōkeshi no chō 道化師の蝶 shared the 146th Akutagawa Prize, awarded early this year for work published in the second half of 2011, with Tanaka Shin'ya's Tomogui.  It's by Enjō Tō 円城塔, who prefers to romanize his name "EnJoeToh."  He's been writing for a while, so his followers may feel this prize is overdue him.

The title story ("Clown Butterfly") is about an entrepreneur named Abrams who sponsors a mysterious author named Tomoyuki Tomoyuki, who writes in several languages including Latino sine Flexione.  Nobody knows anything about the author:  nobody seems to have met him.  And of course nobody can actually read his complete works.  But the narrator, or sometime narrator, is hired by Abrams to write a comprehensive bio of him, or is to catalog his works, or is it just to track him down...

It's that kind of story.  It also involves Abrams' signature invention, a kind of gossamer silver hairnet that catches the fleeting ideas of people sitting next to him on airplanes, which he then converts into successful mass-market products.  Ideas such as "the perfect kind of book to read on airplanes".

Which, irony of ironies, sounded like a real good idea to me when I was reading this story, because I was mostly reading it on airplanes, and it's most definitely not the perfect kind of book to read on airplanes.  It's that kind of story.

I won't bother with more plot summary, partly because I don't know that I'm up to it (it's that kind of story), and partly because plot summary in this case will be misleading.  Just re-reading what I wrote above, I'm thinking, that sounds like a pretty interesting story, like Murakami Haruki or Shimada Masahiko at their best.  But that's not how it shakes out in practice.

In practice, I found it a maddening read.  Impossible to follow.  Willfully obscure.  Offering almost none of the pleasures that I look for in a novel.  What makes me love Haruki or Shimada even, or perhaps especially, at their most surreal is that their work is entertaining, fun, even when it's playing with your head.  What made me such an avid reader of Kafka in my youth was that, even at his most surreal, and even when his stories aren't fun or entertaining (and they frequently are), you could feel the passion, the emotion, behind his head-games.  Enjō is all head games, as far as I can tell.

But, as always, this may be just me.  Enjō is clearly a gifted puzzle-constructor, and what he's made here are two enigmatic fictional edifices whose foundations are squarely set in the shifting sands of death-of-the-author postmodernism and whose spires soar into Nabokovian heavens of erudite intellectual play.  If this is your cup of tea, Enjō may be your gyokuro.

Posted by Tanuki at 6:32 PM No comments:

The inestimable Charles Pierce says most of what I'd say about Levon Helm - what I'd say if I was as Irish eloquent as Pierce.  I'm not, so I'll refer you to him.  (And I like Pierce's idea of outpouring the love now, while there's a chance some of the vibes might make it Levon's way.)

All I'll add is a few of my favorite little touches of Levon.  Like, it seems, most who heard them, the Band touched me deeply - defined a particular kind of faith in the unseen, made you believe in an America that you just couldn't, can't, find much in evidence around you.  But they also just taught me a lot on a musical level - they're like the finest of wines or the craftiest of craft beers, every sip a complex combination of grace notes and oblique attacks.  These are pretty obvious choices, but worth savoring anyway.

"When I Paint My Masterpiece."  As a Levon number this is a bit unexpected, because of course he sat out most of the Band's extended dalliance with Dylan.  But he does this song justice.  And if you need reminding of just what a sensitive, character-ful singer the man was, notice how he pronounced "everywhere" in "ancient footprints are everywhere."  That aspirated "wh" - it totally sells the lyric.  The speaker in this song knows he's not much in the face of all this glory, but he's still got a little bit of dignity.  He's not defensive, either.  He's just going to do the Old World the politeness of speaking correctly.  That or it's just the way Levon sings, but damn:  it fits.

"Daniel and the Sacred Harp."   Levon only sings half of this one, of course, but he does it with his usual elan.  Listen to how he handles the climactic verse:  "Then to his father Daniel did run / and he said Oh Father what have I done? / His father said, Son, you've given in / you know you've won your harp but you're lost in sin."  Listen to the touch of delirium he brings into the second line there - "Oh Father" - not enough to overpower the melody, but enough to scare the bejeezus out of you, for sure.  And yet not enough so's he can't turn right around and give the father's words all the matter-of-fact moral weight they need, too.

"Don't Do It."  Nobody but nobody could rock soul music like the early Band.  And everything about this track is Levon.  He plays and sings the fuck out of it.  Listen to that little swaggery stutter he puts on the beat (he was, as somebody - Greil Marcus? - once said, the only drummer who could make you cry with his drumming).  And the way he shouts "PLEASE" - this is the kind of scream that tenses your neck muscles and your collarbone.

Okay, here's a less obvious choice.  Levon belting out "Further On Up The Road" back when he was a Hawk.  The thing about the Band, see, is that they were basically the only American rock act of the late '60s and '70s who owed exactly nothing to the British Invasion.  They didn't need the Beatles to entice them, or Dylan to permit them, to switch from folk to rock.  Levon learned from one of the actual original rockabillies, the Hawk, and the rest of the Band, straggling in one by one until it was the Band, did too.  They were always playing rock and roll.  Blues.  R&B.  Levon was not turned on to the blues by the Rolling Stones or the Yardbirds, but by listening to Sonny Boy Williamson his own self.  Dig how at the 2:10 mark or so he's singing it:  "'uthah on up the road".  And then at 2:30 that dirty growl: "aaaanggg!"  He completely owns this song.
Posted by Tanuki at 11:07 PM No comments: