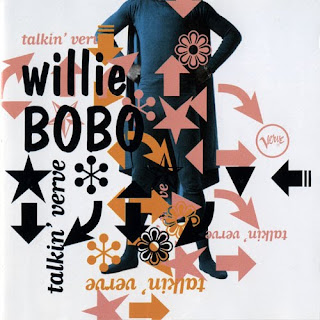 Then again, Willie Bobo is the shit.

And before this disc, I'd never heard him. I knew of him - as a longtime Santana fan, I'd seen his name mentioned in any number of writeups of that band, but like a lot of rock fans I tend to subconsciously assume that late '60s rock came from Dylan's folk and the British Invasion, and that's all. Like, jazz in the '60s just didn't happen, because teenagers weren't listening to it.

Except, some of them were.

I'm not sure I have the best sense of how Latin jazz bands worked. Like, Bobo was a percussionist, a timbalero: this I know. But no matter how good a percussionist is it's hard to think of him as the musical leader of a band; and yet obviously Bobo was hardly the only one in his field. Then, too, he's never the only percussionist playing on any of these tracks. Nor does he do the arranging, at least judging by the credits here. So wherein does his leadership consist? Because something is lending all these tracks a stylistic unity, and it has to be the cat whose name they're all issued under.

Whatever it is, I can't stop listening to it. This has been in heavy rotation for the last month or two since I got it. The very first track is a gas: "Grazing In The Grass," a Hugh Masekela cover. It just starts cold, with this unassuming groove that nevertheless very rapidly insinuates itself into your bloodstream and defies any attempts you might care to make not to move.

And it just gets better from there. Like the classics-you've-never-heard "Spanish Grease" and "Fried Neckbones." (Dig the psychedelic echo on that last one: and it's only 1966.) This is it, man. That secret place where the delirious mirror-ball champagne headiness of the primo mambo meets late-night streetcorner bodega dozens and the confluence conjures up cherubs winking in the cerulean.

And then play Willie's version of "The Look Of Love." There's something deeply wrong with this guy trying to make like a crooner. But also something so right. Like seeing your parents steal a kiss in the kitchen.
Posted by Tanuki at 9:24 PM No comments: 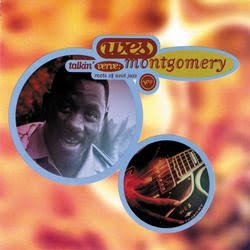 I'll see your Jimmy Smith and raise you Wes Montgomery, says the suave man in sunglasses sitting across the green baize from me. His accent places him somewhere on the Jersey side of Philadelphia, and his gold polyester shirt with the big winged collar and brown racehorse print looks suspiciously familiar. He takes a drag from his Chesterfield King and I look down at my cards...

This one I'm in a little better position to evaluate. I have another disc of Montgomery's Verve years, his installment in the Finest Hour series. Up 'til now I've thought that one of the distinctions of the Talkin' Verve series was that it didn't shy away from, but in fact embraced, the poppier, lighter side of its artists' output. It includes the schlock, in other words. But in Wes's case the Talkin' volume focuses a lot more on his straight jazz side than the other disc does; "Tequila" is really the only example of his Top-40-oriented stuff here. The rest is just good classic Wes groove: always cool, even when it cooks.

Wes Montgomery is one of those guys who invented an entire genre of music which very rapidly got away from him, through no fault of his own. He's the granddaddy of the smooth jazz thing that sneaks out of the air-vents in hotel lobbies to put you to sleep so it can poison you in your sleep. That mellow guitar, those ferny congas. But you can't blame Wes for it, because in his hands it really is cool. He manages to make it sound mod and minimal and taut, whereas everybody who does that now is just baggy.

Wes Montgomery is just as essential to any record collection as Jimmy Smith is, and I don't make that connection (for the second time, no less) lightly, because their collaborations are the highlight of both of their respective stays at Verve. This disc includes three more key examples, including the deathless "Night Train."

Good Lord, sometimes I don't know why anybody ever listens to anything besides jazz. 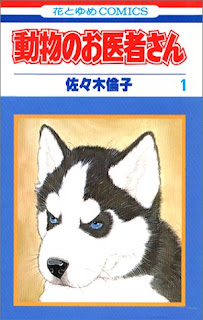 Another manga series that Mrs. Sgt. T borrowed from some friends. I read the first volume of it. I don't think I'll read more. This one I had even higher hopes for, after a week of listening to rapt silence in the next room punctuated by sudden bursts of giggles. There she goes again...

The specimen in question is Dôbutsu no oisha-san 動物のお医者さん (Animal Doctor - i.e., "Veterinarian" would be a mistranslation), by Sasaki Noriko 佐々木倫子. It's a shôjo manga that ran from 1987 to 1993. It's about a young guy studying to be a vet at a thinly-disguised Hokkaidô University; but mainly it's about the animals in his life.

Evidently this was quite a phenomenon when it was in its initial run. Bestseller, and wikipedia sez it boosted not only sales of huskies (the guy's dog) but applicants to Hokudai's vet med program. I can see why, sorta. What it does well is depict the relationship between animals and the people who love them.

It does this by not quite anthropomorphizing the animals. They're drawn in a very realistic style, with just enough cartoony touches to suggest emotions and thoughts that animals (probably) don't have, but that their owners like to impute to them. (The animal renderings are brilliant in that respect; otherwise the art is kind of stiff.) These hints of expression are augmented by dialogue that's presented as if it's the animals' thoughts, but not quite - as Mrs. Sgt. T describes it, these are the kinds of things animal lovers say when voicing what they think their pets are thinking. Like, your aged and nearsighted dog stumbles when jumping off the bed, then scampers off sheepishly, and you say, "I meant to do that."

And that, more or less, is the extent of the manga, as far as I can tell. I only read one volume. The human characters aren't too interesting, and storyline is very episodic, each installment basically telling another funny animal story. The humor is subtle - situational, nuanced, and dependent on the finer nuances of embarrassment. It's not Look Who's Talking cheap, but really quite dependent on close observation of humans and animals. I could appreciate it, but I didn't find it laugh-out-loud funny. In fact, I tended to fall asleep while reading it...

But then, I'm not really an animal lover. I love an animal lover, though, so I recognize the things it's doing. In fact, reading this gave me a whole new insight into the kinds of things Mrs. Sgt. T says when looking at dogs, birds, squirrels, cats, horses. Did she develop that sense of humor from reading this at a young age, or did this tap into a kind of humor that people like her already had as a common language?

(For a more enthusiastic, not to mention informative, take on the manga, check out this summary by Rei.)
Posted by Tanuki at 6:28 PM No comments: 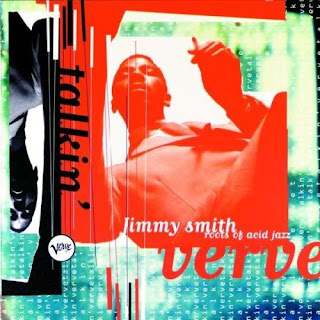 As with the others in this series, I can't judge this anthology as a anthology should properly be judged, on what it includes vs. what unincludes. Nor can I say much about how this fits in with Smith's career as a whole. I can say that Jimmy Smith came to Verve in the early '60s after a fruitful few years at Blue Note; like Wes Montgomery, he came to Verve to have hits, and have hits he did. Ain't nothin' wrong with that, as long as they're also good records, and Smith's were.

So here's what I discovered: Jimmy Smith is essential.

Basically what we have here is some of the funkiest, soulfullest music ever waxed. That's funky in, as the liner notes by Tom Terrell note, the traditional sense of pungent - the kind of thing that makes you wrinkle your nose in disbelief and perverse delight. That's why Booker T called his riff "Green Onions," and why Ike and Tina nailed it with "you're funkier than a mosquito's tweeter."

That doesn't mean it has to be on the one. There's a great variety of aromatic funk here, from everything from the most impeccably cool jazz - "Mellow Mood," with Wes himself - to borderline psychedelic FM soul - "Burning Spear," with Oliver Nelson going the Chess brothers one better. A plethora of grooves, a myriad ways to swing. But it's all funky. It's all good.

And not only is it good to you, it's good for you: if you're like me (pray to God you aren't) you've been hearing bits and pieces of Jimmy Smith in everything from Santana to Yes without ever realizing it. It's worth knowing the original, to find out how it all fits together.

In short, you need yourself some Jimmy Smith. And this is as good a way as any to get some, with that way cool cover and an anthologizing principle (cater to the acid jazz market) that doesn't neglect the groovy stuff for the orthodoxically jazzy stuff. Or vice versa.