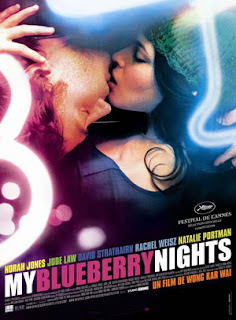 This movie is kind of a disaster.  It's bad in a way that makes me start doubting my reaction for Wong Kar-Wai's other films.

There are a couple of problems, as I see it.  First, the dialogue is atrocious.  This is a writing problem.  Wong is famous for working with only a minimal script, which he changes/fills out/improvises as he goes along.  In this case, that technique doesn't seem to have served him well.  All the characters and scenes are underwritten.  This leaves the good actors in the film mostly emoting madly (David Strathairn, Rachel Weisz) or mugging cutely (Jude Law) to make up for the lack of anything else to do, and the mediocre actor (Norah Jones) fading into the scenery.

None of the story arcs carry any emotional weight.  We just don't care about these characters;  they're either clichés or ciphers, and not in a good way.  And this is what makes me start to doubt Wong's other films.  I don't speak Chinese, and so let's be honest:  I actually have no idea if Tony Leung is a good actor or not.  Any emotional impact I'm getting from In the Mood for Love or Happy Together comes from subtitles (which hide more than they reveal, by their nature:  this is not xenophobia about foreign films, this is experience in watching Japanese films and noting the discrepancies between dialogue and subtitles) and reading those aspects of the performances that are extra-verbal (which I could well be misreading).  It's entirely possible that the dialogue in the other films could be just as bad, the characters just as poorly improvised, the performances just as drastically overmodulated, and I'd never know it.  Of course this is always an anxiety I have when I watch a film made in a language I don't speak:  I care enough about language never to be able to write it off entirely.  But usually I can suppress the anxiety;  this film reawakens it, at least with respect to Wong Kar-Wai's work.

The other problem is that the visuals just aren't very interesting.  I suspect that even if I knew Chinese, and even if I did as a result discover that the dialogue in In the Mood for Love is just as bad as in My Blueberry Nights, I'd still find the former a much better film, and emotionally effective, because (it almost goes without saying) the visuals are so striking, and carry so much emotional weight.  But here the visuals are uninspired.  Pretty, even atmospheric, but not in a particularly striking or memorable way.  And so we're left to concentrate on the characters and what they're saying.  How much does this have to do with the change in cinematographers?  Has it really been Christopher Doyle's genius we've been responding to all along, and not Wong Kar-Wai's at all?
Posted by Tanuki at 11:51 PM 3 comments: