By way of further comparison, here's a live rendition of "Yours Is The Light."  This was recorded on the 1973 Japan tour and included on the Lotus album.  Which is definitely a must-have album, both as a Santana document and as an objet d'art, if you can get hold of either the original Japanese vinyl or one of the deluxe CD editions that reproduces all the Yokoo Tadanori artwork.

Flora didn't join the band on the tour, and maybe for that reason Carlos turns this number into a guitar showcase.  It's all guitar, all over, start to finish.  That's the case with most everything on this album, actually:  as retiring and team-oriented as Santana was in the studio during this period, on stage (if Lotus is fair evidence) Carlos was most definitely the center of attention.  On the live record this is accentuated by the mix, which puts Santana's guitar unbelievably far out in front, just dwarfing the rest of the band.  It doesn't help that the overall recording is pretty tinny, as if everything was overamplified in order to bring out some of the percussion and keyboard detail that would otherwise have been lost in the arenas they were playing.

It's a nice rendition, though:  the above makes it sound like I'm disliking it because Carlos has turned it into "just" a guitar showcase, but in fact it's a nice guitar showcase, with very tasteful playing.  But it's true that I think it's a lesser achievement than the perfectly-poised studio recording.

Lotus does have its good points, though.  My favorite moments are two:  the opener, "A-1 Funk," and the later "Mantra."  (I can't find the latter to link to on youtube:  there's a studio version, but it's not as hot.)  Both reveal Santana doing some heavy-psychedelic brain-surgery guitar stuff that I've never heard on any of his studio albums.  There's an evilness (in a good way) that shows he was listening more receptively to all of Bitches Brew than Caravanserai and Welcome had suggested.
Posted by Tanuki at 7:47 PM No comments:

Alfred Hitchcock's The Man Who Knew Too Much (1956) 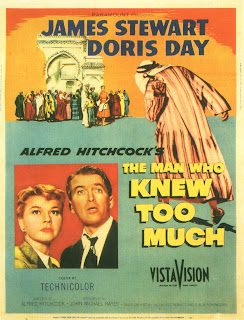 Ben McKenna's problem is ostensibly that he knows too much:  he has information about an assassination plot, and has has people after him and his family because he knows that information.  But his real problem is that that he thinks he knows everything, and actually knows nothing.

It's hard to realize this at first because James Stewart is so likeable, and the background we get on this character makes him seem like the salt-of-the-earth American that Stewart did so often and so well.  GP from the Heartland, WWII vet, loving dad and husband, fundamentally decent American, right?

The turning point for me comes when he forces his wife to take tranquilizers before he tells her their son has been kidnapped.  He insists that she's been acting manic, insists that as a doctor (and, implicitly, as the patriarch), he knows when she should take pills.  So she does.  But we know she hasn't been acting manic, has if anything been cooler than him.

And in fact she's been right all along - right to suspect Bernard, right that people have been watching them, right that something was going on that they didn't understand.  And it shouldn't surprise us that she was right:  she's an ex-professional singer, well-traveled and worldly.  She's probably seen more of the world than her husband - note his reluctance to leave Indiana, and her wistfulness for New York.  She has more experience with a wider variety of people:  note her sophisticated London friends.  A wiser man might have listened to his wife, but McKenna pooh-poohs her suspicions, and at first we, the audience, go along with him - because, of course, he's the Man.

Of course his ignorance is brought out with the mix-up over the name Ambrose Chap(p)el(l).  An easy-enough mistake, on the surface.  But if we've already realized by this point how full of himself this guy is, then this mix-up is just the icing on the cake.  He's an ignorant American male who thinks he knows everything and gets to make all the decisions.  Sly movie.
Posted by Tanuki at 5:45 AM No comments:

Here's what I mean when I noted that Santana was holding back on "Stone Flower."  On the band's next album, Welcome, he included another bossa nova number, and here he cuts loose.

"Yours Is The Light" is an original by two members of the band, keyboardist Tom Kermode and drummer Mike Shrieve.  Maybe that let Santana feel he could approach the track with less reverence than he could one by the high priest of the new trend, or maybe it was just that, with "Stone Flower" under his belt, he felt more confident in working his own San Franciscan fire into the Brazilian waters.

Either way, the band is just as bossa-nova cool and airy as you could wish for on this track, with flutes, brushy percussion, and acoustic piano like the trickling of a sylvan spring, and with guest vocalist Flora Purim doing her trademark angel thing on top of it all.  But this time, when it all builds up to a guitar break, Santana actually takes one.  Rips off a beautiful solo, with all the passion he's known for.

And it's perfectly in-context, too - note how, as singing as it gets, he frequently interrupts his sustain, shuts it all down, to observe the tricky syncopation of the rhythm section.  He's not shredding, he's dancing.

But it's definitely cathartic - especially because this is the last track on the first side of the record, and the first time he really cuts loose on the whole album.  It's a band album (and a wonderful one), not a guitar-hero one.
Posted by Tanuki at 12:29 AM No comments: 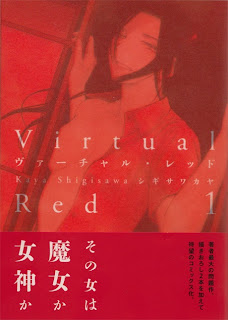 Virtual Red (Vācharu Reddo ヴァーチャル・レッド) by Shigisawa Kaya シギサワカヤ.  Published as a book in 2012 in 2 volumes, of which I've only read the first;  the episodes in it were mostly published in dōjinshi between 2004 and 2006.

It wasn't, unfortunately.  I've never read this author.  I don't know quite what to make of it.  The story is mildly intriguing:  an overworked, underconfident young male software engineer is directed by a coworker to the house of a woman "who'll sleep with anyone."  He sleeps with her once, basically moves in with her, and most of the rest of the book (what I read, anyway) takes place in the house.  But rather than focusing on their sexual escapades, as seems to be the promise at first, the focus is on the guy's confusion and anxiety - is she real?  Why does she like and accept him?  Where is her husband?  Is he taking advantage of her (duh)?

That description makes it sound more interesting than it actually is.  I'm just not sure what this is trying to do.  The woman is way too underdeveloped to be an effective deconstruction of a male fantasy - but after the initial sex scene their relationship is too tame to work as a straight rendition of a male fantasy, either.  Visually and narratively she's presented as a hundred percent sex kitten, with no apparent interiority, suggesting it's not really aimed at women readers, but there's so little payoff that it's hard to imagine it's aimed at male readers either.  If the narrative was a little less foggy (it's rather hard to follow, because we're constantly trying to follow both an impressionistically-rendered external narrative and a very inarticulate internal monologue in the guy's head) it might be challenging on a number of levels, but it's not, so it's not.  It seems to be aiming at literary erotica, but it's not really effective as either.  I'm not going to bother with the second volume.

Mrs. Sgt. T., who's far more manga-literate than I, says this is a perfect example of one possible early etymology of yaoi.  That is, this isn't dealing in homoerotica, but it is totally lacking in plot tension, punch lines, and meaning.
Posted by Tanuki at 7:06 AM 1 comment:

It's from Caravanserai, the 1972 album on which Santana switched gears drastically from highly-accessible Afro-Latin jam-rock to rather arcane Afro-Latin jazz-rock.  He lost a lot of his audience with this record, and the two in the same vein that followed it, and while I have a lot of love for Welcome and Borboletta, I've never quite warmed to Caravanserai.  I think it's because there are two or three too many atmospheric waves-of-sound tracks to wade through before you get to the rhythmical stuff.

But the rhythmical stuff is there, and some of it's amazing.  Take for example Santana's take on Tom Jobim's "Stone Flower."  Here's Jobim's version for comparison.

What's apparent here is how hard Santana is trying not to rock this up.  He'd loosen up a bit on the following two albums, allowing his band to mix the new jazz aspirations with enough soul and pop indulgences to make the whole thing sound natural, but on this album it's apparent that Santana is trying very hard to be taken seriously as a jazzer, and is reining in any tendencies toward rock overkill.  Whether that's the right decision for the lp as a whole is where I'm undecided, but on "Stone Flower" it produces a wonderful sense of restraint, of abandon held carefully in check, that really makes the record.

Santana has a whole army playing on this track:  two guitarists, an acoustic bassist, organ, piano, Rhodes, not to mention vocals and a phalanx of percussionists, both rock and Latin.  It could easily have overwhelmed Jobim's fragile bossa melody, which often happens when big bands get their hands on his tunes.  That doesn't happen here:  everybody knows his or her place and plays in it, carefully, intricately, and with great deference to each other and the song.

Listen to Mike Shrieve's characteristically busy, inventive drum work, and how subtly it submits to its role in the overall percussion framework of the track.  Listen to Tom Rutley's acoustic bass, how it leaps into almost a lead-instrument role here and there, and consider how many times you've heard that happen in a predominantly electric setting.

But most of all check out Carlos's playing.  (Or is that Neal Schon?  I confess I have a hard time telling them apart when they're both on a track.  But I think this is Carlos.)  He's got a beautiful melodic line to himself, and he plays it with blood and sweat, but not too much.  Just when you think he's about to cut loose he drops out and the band goes into that little laughing break.  When Carlos comes back in he's back to that melodic line.  The emotional energy goes, not into some cathartic run, but into the bite with which he plays the notes he's given, and the organ-sounding distortion on his guitar (I don't know what precisely he's doing, but it comes out sounding a bit like when Clapton played through a Leslie.)

The result is a rich, lush, intricate sound that conveys a lot of energy without ever losing the cool.  Very nice.
Posted by Tanuki at 12:09 AM No comments: