My conscience is bothering me about my last post, as I knew it would.  It's not so much that it's not 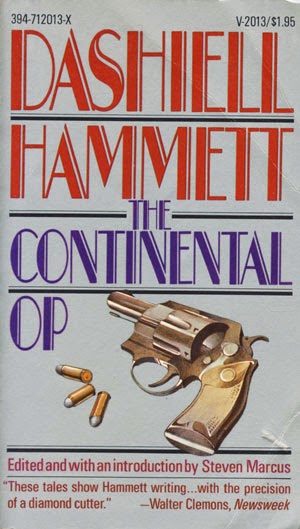 really fair to compare Hemingway and Hammett.  It's perfectly fair in the case of Hemingway's boxing and gangster stories - that's Hemingway meeting Hammett on Hammett's home turf.  And overall, even though comparisons are, yes I agree, generally odious, they're also inevitable and can be instructive.  What I didn't do was try to be instructed by the comparison.  I was glib.  I try not to be.

Why do I want to compare the two, other than because I've been reading them both lately?  Period, of course:  they're contemporaries. But the style, more than that.  They were both lionized for a modern, lean, masculine prose style.  Both lionized, but Hemingway more than Hammett, certainly in their lifetimes.  And while now I'm not sure there's much critical disparity regarding them (we're in the age of pop culture's ascendancy), still I feel protective of the underdog.  It shouldn't be called the Hemingway style.  It should be called the Hammett style.

But that's obviously not the whole of it.  It's that macho bullshit.  Why do I hate it so much in Hemingway when I don't have a problem with it in Hammett?  After all, Sam Spade and the Continental Op are men's men - they define a kind of 20th century archetypal masculinity every much as does Nick Adams.

Is it about milieu?  Do I accept noir protagonists' machismo because it's located in a world that demands it?  Because their toughness is a reaction to the predatoriness of those around them?  But is that not true of Hemingway?  Doesn't the brutality of war, which lies in the background of his early work, serve as an argument that his protagonists needed to become tough?  That the author himself, sensitive poetic soul that he is, needed to become tough, to assume a guise of masculinity in order to survive?

I want to go on, but my heart's not in it.  It may be as simple as pleasure.  Hammett does the stylistic innovation thing, does the crisis-of-masculinity thing, but always within the context of a pleasurable story.  Hemingway's stuff doesn't have that same narrative drive.  He's not as interested in good stories.  He's too fastidious to fully invest in a gangster story or a boxer story, although he's intrigued by those manly milieux.

These stories are in some ways the definitive Hammett.  I don't know why I saved the short stories for last, but they're brilliant.  Clever, dark, exciting, and every bit as brutal in their portrait of society's underbelly as his longer stuff.  Perhaps not quite as deep - not as comprehensive an indictment as Red Harvest.  But they're good.
Posted by Tanuki at 3:58 PM No comments:

Yeah, my Hemingway experiment may have reached an end.  I read his second short-story collection, Men Without Women, and I'm glad I did because I just learned that Murakami Haruki borrowed the title for his latest collection.  So, now I'll get the reference, which is half of why I read literature anyway.

But honestly that's all I got out of this book.  It just felt like more of the same.  Macho bullshit.  Crisis of masculinity.  I'm not sure he's saying anything new with it.  And I suspect he was worried about that, too, because more of these stories are extroverted, flirting with genres - the bullfighting story, but also the boxing story and the gangster story.  But at least with the latter, I found myself almost crying with frustration, because Hemingway's contemporary Dashiell Hammett - who I was reading immediately after this - does it so much better.

So I should quit, right?  Cut my losses, life's too short, right?  I may not be able to, though.  In the interest of getting the reference, I may end up feeling like I have to read two or three more.  Fair warning.

Posted by Tanuki at 7:39 PM No comments: