Danny Overbea isn't well known.  Hell, I don't know anything about him.  This guy does.  But I have his version of "40 Cups Of Coffee" on a Chess comp.  It was a Checker release in 1953.  Ella Mae Morse released a version of it the same year that seems to be better known now (Bob played it on his radio show);  I don't know which came first.  And the indefatigable Bill Haley also did it, in 1957.

Give me Overbea's version (and I'm sorry the youtube cuts off early).  It's just a perfect slice of assured Chicago blues:  the balance between the guitar and piano and the horns and the voice is just right.  His delivery of the lyrics is perfect - you can completely believe him pacing the floor, loading up on cigs and coffee, waiting for his baby to come home (and she does - that's why I'm sorry it cuts off).  Ella Mae Morse's version is fine, but she has to shout it to create a tenth of the authority that Overbea lets drop like a drip of honey.

Posted by Tanuki at 5:17 PM No comments: 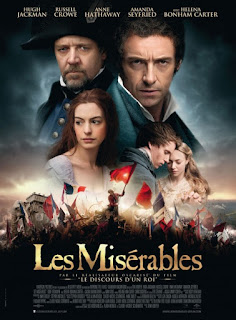 I have nothing to compare this to.  Never read the book, never saw the stage version.  Never saw a film of the book, or watched any youtubes of the stage version.  Didn't even know enough French history to know if the 1832 uprising would succeed or fail.  I was a Les Mis virgin!  But Mrs. Sgt. T wanted to go, and it sounded like a nice night out, so we went.

I was not quite in tears like she was.  But I was in slack-jawed awe for much of it, I'll confess.  I responded readily to the noble melodrama of the story, and the beauty and sweep of the music.  It rocked.

Voices.  Amanda Seyfried's ethereally pure soprano, with that birdlike vibrato, was like nothing I'd expected to hear in a theater in 2013.  It was so gloriously old-fashioned and unabashedly virginal....  Hugh Jackman's singing was a pleasant surprise.  Mrs. Sgt. T laughs, because she's been youtubing him for months in anticipation of this film.  But he was really good....  Anne Hathaway's scene - you've probably heard about it, and if not you'll know it when you see it - was spellbinding.  A single take, in close up, singing live...  In fact, the only disappointing voice was Russell Crowe's.  He sounded nervous and constrained.  But physically, and in feeling and manner, he was perfect for the role, so I guess it was worth letting him sing...

Look.  Again I come back to Anne Hathaway's scene.  Not only was it a brave decision to let her sing it in such tight focus, but the lighting, off-center composition (for most of the sequence she's on the right side of the frame, looking out of the frame to the right), and grain of the film combine to make a thing of great beauty.  Most of the film looked like that:  the colors were rich but muted, the textures subtle and shaded rather than bright and clearly-defined.  Like a dark pastel sketch.

Themes.  I know this has been in production forever, so I doubt it's more than serendipity that it echoes the Occupy movement's aims so neatly.  It does, though, and that lends it power.  Javert's dutiful upholding of unjust laws places him squarely on the wrong side of history and human progress, right?  Same as pepper spray cop...  Meanwhile, the love story.  I suppose it does blunt the political thrust of the material.  After all, the film's final vision of revolution, liberation, fraternity, situates them on barricades in Heaven, not on earth, right?  I.e., the film's elevation of relationships to the same plane as social justice could be said to confuse the issue.  But there's another way to look at it, of course, which is that the central insight being presented is that the greatest thing in life is to love other people.  Love for a sweetheart, love for a child, love for the poor:  it's all the same thing.  Enough of that and we'll have people mounting the barricades here, too.
Posted by Tanuki at 10:58 AM 3 comments: