Ikeido Jun 池井戸潤's the author; Shitamachi Rocket 下町ロケット (literalishly "Downtown Rocket", although Seidensticker is probably right that "Low City" is better) is the title.  It was published in book form in late 2010 (after having been serialized in Shūkan Post 週刊ポスト, a general-interest newsweekly) and won the Naoki Prize in summer 2011.  There was no A-Prize awarded this summer, so I picked this up instead.  Thought I'd have a go at a Naoki Prizewinner for a change.  I've read a few over the years, but accidentally:  despite my interest in the A-Prize, and in popular fiction of some varieties, I've never taken on the Naoki challenge.

This one is a keizai shōsetsu 経済小説, what's usually called in English a "business novel": a good description, if an inexact translation.  I freely admit (this is me, freely admitting it) that I don't know much about this genre.  Think a novel set in the business world, then imagine what genre conventions might arise?  I.e., not a mystery or a thriller or a love story that just happens to involve people with jobs, or a backdrop of high finance, but a novel in which the ups and downs of business deals are meant to provide the main narrative interest?  At least, that's what's happening in this one.

It was interesting to notice my reactions to it, because I went into it having intentionally read nothing about it.  All I knew was the title, and some vague recommendations I'd seen in an ad on a train:  I wasn't expecting it to be a "business novel."  I had no expectations at all, other than (this being ostensibly popular fiction) readability and an interesting plot.  And some kind of excellence somewhere, this being a Naoki winner and all.

So I'm going along, reading through it, and it's following all the ins and outs, ups and downs, of a small-to-midsize manufacturing company in an unfashionable district of Tokyo, and it's going into such details about their deals - a patent-infringement lawsuit, a countersuit, a negotiation over licensing, a subcontracting proposal, all dealing with valves and other engine parts - and there's not much else going on, and I was about halfway through before I remembered, oh yeah, there's a genre for this.  That's when I stopped expecting anything more to happen.  And sure enough, nothing more happened:  we just kept following Tsukuda Manufacturing's efforts to convince the behemoth rocket-engine maker Empire Heavy Industries to let them supply them with a particular valve, when Empire would rather just license the technology.  That's the story:  little company convincing big company that it can do the job.  In the end, the rocket launches with Tsukuda's valves aboard, and everybody's happy.

Knowing nothing about the genre it supposedly so excellently represents, I can't say anything about how it does or doesn't deal with its conventions.  What it felt like to me from the very beginning was a Japanese TV drama series - keeping in mind that, like HBO series or most British series, Japanese dramas begin with an end in mind.  Also keeping in mind that I love a good TV drama, in this case I don't mean it as a compliment.  It felt formulaic - odd how you can feel that even if you've never encountered the formula - and shallow.

Formula:  the Little Company that Could.  Again and again we have scenes and encounters designed to remind us that Tsukuda is an old-fashioned, familiy-oriented, craftsmanship-rich company that's trying to do business in a world increasingly filled with financial and legal predators, and still dominated by snooty Big Firms who disrespect the Little Guy.  And of course the Little Guy comes out on top.  There's even a scene where reps from the Big Firm are inspecting the Little Guy's manufacturing setup, and we learn that Tsukuda Inc. sometimes makes their precision high-tech rocket valves by hand, by feel, rather than with machines calibrated to the micrometer.  (Maybe that's how it really works, but to me the scene was as risible as the one in the third Matrix movie where we see our future tribal people making high-tech machine bombs with mortar and pestle.  The Old Ways...)

Shallowness:  The main character is Tsukuda himself, son of the guy who founded the company, an ex-academic rocket scientist who took over the family business when his dad died.  Also Tsukuda had been associated with a failed rocket launch and hounded out of academia.  So of course he's having to adjust to the business world, and also redeem himself by being associated with a successful rocket launch.  Fine.  He has a family - a mother who was once pretty involved in the business herself, an ex-wife who stayed in academics and divorced him because he didn't (wtf?), and a teenage daughter in a rebellious phase.

Here's what I mean about shallow.  Tsukuda's back story exists entirely so that we can see him discover that there's meaning and satisfaction to be found in running a company well - people always suspect, half accurately, that he secretly misses the hallowed halls of etc., but in reality he's finding that helping his company succeed, his employees take pride in their work, etc., is a good life for him.  Has intrinsic dignity.  And I don't disagree, but jeez, how hackneyed is that?  Especially in a business novel - it's like having your detective in a mystery novel learn by the end that, "gee, I really like solving mysteries."

And the women in his life exist entirely to forward his story.  His mother exists solely to reassure Tsukuda that he's not neglecting his teenage daughter by spending so much time at work.  His ex-wife exists solely to get us to feel sorry for the lonely, misunderstood middle-aged salaryman.  And his daughter exists solely so that at the end she can give him a bouquet and say, "well done, Dad."  Sniffle.

I want to say it's a novel resolutely devoid of subtext, but that's not quite right.  It's just that the subtext is so incredibly (a) obvious and (b) old-fashioned.  In 2011 we're still celebrating the Little Company that Could?  Still celebrating the sad-sack salaryman as the repository of all that's good and holy in modern Japan?  Especially in light of the trenchant critiques of the work world that have appeared in recent A-Prize winners (by women, significantly), this seems either incredibly reactionary or almost poignantly naïve, like the antidote to companies wrecking the economy is just celebrating the idea of a company that doesn't...

On the other hand, it really was readable.  Ikeido's prose is chock-full o' clichés, but at least they make the writing go down easy.  And the plot really did move right along, hitting the right emotional notes at every turn. That bouquet...

I'm not surprised to learn that it actually was made into a TV show.
Posted by Tanuki at 3:46 PM 2 comments: 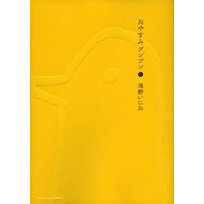 The other Asano Inio title I've read is Oyasumi Punpun おやすみプンプン, which started in 2007 and is still going on, up to 11 volumes at the moment.  I read the first three volumes back when that's all there was, and never went any farther.  Reading Nijigahara makes me want to go back to Punpun to see if it got better.

Here's what I wrote in my pre-blogging days: