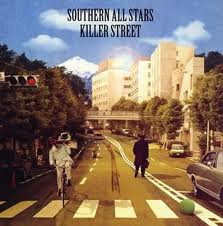 Kuwata Keisuke is one of the few Japanese pop stars who I really follow. Both in his solo work and in the context of his erstwhile band Southern All Stars, he's probably the only certifiable pop genius I've come across in Japan. As a songwriter he's trying to combine the mainstream J-pop hitmaking lyrical sensibility of Aku Yû with the poetic inventiveness of Bob Dylan and the pornographic cleverness of Prince (sometimes Kuwata makes Prince sound like the Church Lady), set to the unassailable tunefulness of Paul McCartney; as a performer he's equal parts McCartney and Mick Jagger. In other words, he's one of the few interesting lyricists in mainstream J-pop, one of the most consistently catchy songwriters around, and an always compelling performer.

His main flaw as an artist is that he's too prolific. It's just not summer in Japan without a new Kuwata Keisuke/SAS beach song, and it's just not Christmas without a new KK/SAS romantic ballad. Most years he obliges, but there are only so many variations he can wring out of these templates, and so his songs, brilliant as as they usually are individually, often tend to blend together.

Take, for example, his work in the last year or so. This consists of:

2) a Hara Yûko solo single called "Yume o arigatô." Two new songs. Hara Yûko is Kuwata's wife, also a member of SAS, and a solo artist in her own right; often her records are written, arranged, and produced by KK himself, which is the case here.

Altogether, that's six new songs released on CD, but since one of these is eighteen minutes long, it all equals a whole album, at least of the vinyl variety. Considering that Kuwata has done more or less this amount of work every for the last thirty, it's a pretty good output for a guy in his fifties.

What's it all add up to? The lead Hara Yûko song is expert fluff, a bouncy pop number that sounds like it's meant to play in a video arcade; her already slightly surreal voice sounds like it might be auto-tuned, which would be typical of KK. The new song on the b-side, and two of the three songs on KK's single, are kind of forgettable.

But the bonus song on her anthology, also a KK production, is brilliant. "Kyoto monogatari," it's called, "Kyoto story," and the lyrics are essentially a bunch of Kyoto place names and catch words strung together. Musically it's a pastiche of mid-20th century pop, pre-rock, with some self-orientalizing musical color: there's a koto mixed in there with the horns, the strings, and the harpsichord. The whole thing is as rich and delicate and subtle as a piece of wagashi, which is to say it's a perfect pop confection.

In a very different way, the third song on KK's single is also a masterpiece. Called "Koe ni dashite utaitai Nihon bungaku" (Japanese literature I want to sing out loud), it's a medley of passages from modern Japanese literary classics set to music. The complete list is here (in Japanese) for those who are interested. As for the song itself, here's part one and here's part two. Musically, as well as lyrically, it's quite amazing: the melodies and arrangements are catchy, and each builds interestingly on the last; they're witty, too, with Akutagawa's Buddhist parable "The Spider's Thread" being given a raga-rock setting and Soseki's "I Am A Cat" turning into a thrashy funk stomp.

This is, I think, Kuwata's answer to the second side of Abbey Road. It's plain he's been thinking about Abbey Road lately. The cover to SAS's last album (in 2005), shown above, is an homage to Abbey Road's. And last year Kuwata gave a show in which he performed Abbey Road in its entirety - as mondegreens. That is, he wrote nonsense Japanese lyrics to all the song that approximated, soundwise, the way the English lyrics sound to Japanese ears.

The Abbey Road concert and the J-lit song were both part of a half-year miniseries Kuwata did on Japanese tv last year (I'm sorry I missed it; it's out on DVD, but way too expensive for me, and it leaves out the Abbey Road show) called Music Tiger (Ongaku tora-san), a reference to the famous Tora-san movies. The import of the title seems to have been not only that putting Kuwata in your iPod is like putting a tiger in your tank, but that he's also a roving lovable musical scoundrel - appropriately, the program found him covering an incredible range of tunes both Western and Japanese, both old and new, as well as a lot of new stuff and a broad swathe of his back catalog.

In other words, it's been a busy couple of years for Mr. Kuwata. And he has a new album coming out in October...
Posted by Tanuki at 9:51 PM No comments: 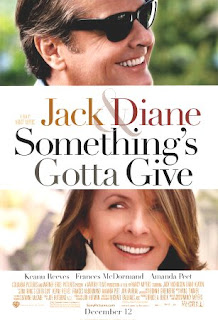 So I'm in Japan and I blog for the first time in a week and it's about this?

We watched Something's Gotta Give tonight for essentially the same reason that I'm blogging it. We were home (i.e., home in Japan) tonight for the first time in many days, and we were exhausted and needed something to vegetate to, and this was handy. Japanese TV is just as brain-numbing, but neither of us, pop culture fanatics though we are, can stand most Japanese television. We watch with great interest for the first day or two we're here, then we remember how unbelievably, maddeningly stupid most of it is. Brain-numbing, but in a bad way...

Is this a good movie? I have nothing against romantic comedies; I don't usually reach for them in a pile of DVDs, but I can appreciate a good one. This isn't entirely a good one. But it's enjoyable enough, up to a point.

The good: Diane Keaton, of course. There's a scene, after she and Jack have slept together, where he says something that leaves her at a loss for words, and you can see about ten different emotions crossing over her face before she says anything, from love to anger to embarrassment to rueful amusement to others too fleeting to quite identify. I'm not sure I know what good acting is, but I think this is it.

Also good: Keanu Reeves, surprisingly enough. I'm not sure I know what good acting is, and I've really never been sure Keanu can do it. I know a lot of people think he can't. And I'll admit that there's a very wooden quality about him in most of his roles. But in almost everything I've seen him in, this woodenness works in favor of his performance. This is true of Matrix, certainly, and of Dracula, too. I won't go so far as to say it's on purpose - that is, it may not be acting - but he's smart enough to usually only take roles in which his style of performance will be effective. It's effective here: I actually believed his character's attraction to, and then love for, Diane's: he's so direct, so preternaturally possessed, so unembellished, that you can buy him as a guy who knows what he feels and can see beyond social strictures.

Which makes it all the more a shame that the bad in this movie is so bad: the way it mercilessly tosses Reeves aside when he's served his purpose. You know from the start, because it's a romcom, that Diane and Jack will end up together, but I at least was rooting for Diane and Keanu. And the movie lets them stay together far too long - when Keanu is cast aside for Jack, you can't help but feel sorry for him. Especially because Jack's change of heart is explained in such a silly manner - like Diane's really going to forgive him because of a two-minute High Fidelity pastiche?

So Jack and Diane end up together. I knew that, and I was prepared to hate the movie because of it. But I have to admit, lousy writing aside, they have pretty good chemistry. And that, after all, is what you see a romantic comedy for. This onscreen chemistry thing is real, even if it's hard to quantify or analyze. And it's as good a reason as any to enjoy a movie.
Posted by Tanuki at 7:15 AM No comments: