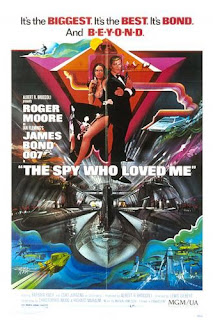 (For my other Bond reviews, and my apologia for the project, see the James Bond 007 tag.)

CUT TO THE CHASE: Disco Bond. And I mean that in a good way.

BOND, JAMES BOND: This is a pivotal film in the series, because this is where they cast their lot in with comedy. There were symptoms of this in the last two films, and what saves this film is that there really isn’t much more stupid comedy here than in Golden Gun. But they lose the cigar: it’s clear where their loyalties now lie.

You can hear it in the otherwise excellent Marvin Hamlisch score, where he adds dumb circus music to the shot of the broken-down van in the desert, or where he adds Lawrence of Arabia music to the shot of Bond striding over the dunes. You can see it in MI6’s headquarters on the Nile, and in the way the Q scene is now played entirely for laughs. Starting here the series trends into self-parody. Why? They didn’t need to. The parts of this film that work (and that’s many of them) should have shown the producers that the Bond myth was alive and well, and in fact feeling a bit frisky.

What makes this film succeed—most of it, anyway—is the fact that this is the biggest and most decadent Bond yet. It’s a disco-era Bond, all faux sophistication and expensive kicks. The film looks and feels luxurious, and in its best sequence it has Bond in a tuxedo and a sexy Russian agent in a slinky dress sauntering through the Sahara. There’s a lot of candy here.

But it comes at the expense of the cigar.

What Makes Bond Bond: For the second time in three films, the first time we see him he’s in the sack.

What Makes Roger Moore Roger Moore: Jaws is ripping their van apart, Major Amasova is in the driver’s seat trying to start the engine, and Bond plays keepaway with the key.

BAD GUYS: Right about now they seem to have started to run out of ideas for bad guys. Stromberg is eminently, obdurately forgettable. He sits around in Dr. No’s living room trying to execute one of Blofeld’s failed schemes and hiding his (ooh, scary) webbed hands. None of which is really the problem: the problem is that when he speaks he sounds like a bored history professor instead of an evil mastermind. He has none of the gleeful sadism we’re used to seeing in Bond villains. Sometimes one thinks this is a novel take on the part, and one thinks one is seeing something of a noble ennui in him; but sometimes one is merely bored.

And did I mention his plan is completely recycled? From You Only Live Twice. Instead of swallowing spaceships to start WWIII, he’s swallowing submarines to start WWIII. Did they think nobody would notice that they’d already done this?

Jaws, on the other hand, is a great henchman, in spite of the fact that he’s clearly designed as much for comic relief as for thrills. The producers are still in touch enough with the Bond ethos to dress Jaws in a coat and tie, for example, and have him straighten his cravat after a scuffle. The detail subtly connects him with Bond (see below), despite his monstrosity.

GRATUITOUS SEX: Barbara Bach is excellent as a Playboy vision of a Russian spy, all sheer fabrics and soft focus. Total ‘70s sex-kitten, right down to the stoned purr with which she delivers her lines. Delightfully droll. She’s the best thing about the movie, and an object lesson in how the right Bond girl can just about carry the whole enterprise. And that code name: Triple X! Sounds so much cooler than NC-17.

GS 3 – don’t forget the treasure into which he delves, deeply.

AND VIOLENCE: The fight on the rooftop in Cairo is nice; what’s nice about it is the way Bond straightens his tie afterward. Tie-straightening: details count.

But of course the best thing in this category is the stunt in the pre-credits sequence, that ski jump into the abyss, with the Union Jack parachute to save the day. One for the ages.

BOYS WITH TOYS: This is a Q-branch movie. Increasingly, that means more sight gags in the lab, which we don’t really need. But it also means the car. The car. A Lotus Esprit that can turn into a submarine. Baby. With all due respect to the Aston-Martin, this is the definitive James Bond Car.

JOIN THE NAVY AND SEE THE WORLD: Austria, Egypt, and Sardinia. Austria’s just an excuse for that ski jump, but the Egyptian sequence is excellent, one of the reasons we watch Bond movies. Some truly inventive work in the pyramids scene, using the lights and sound of the Son et Lumiere to accent Bond’s encounter with Jaws. This is the appropriate place to notice the photography of Claude Renoir; the cinematography here is really a cut above what we’re used to for Bond, lending everything a classy sheen that makes whatever’s on the screen just look good.

ETC.: The music here deserves special mention. Marvin Hamlisch does the score, and (overlooking the inappropriate comic cues) it’s excellent. What I like best is the unexpected disco soundtrack to the Lotus chase. As I say, disco turns out to fit Bond to a T. The theme song is immortal, of course: Carly Simon’s “Nobody Does It Better.” A couple of films down the road they’d get the idea of putting the singer in the opening credits; they could have done that here and nobody would have complained. But the credit sequence as it stands is one of the best in the series. That montage of naked women on the trampoline, or running away from bad guys, or marching like Russian soldiers. It’s gloriously silly, decadent in the extreme, and the essence of Bond in the ‘70s…