I think the emblematic moment for The Shadow is the first scene in the nightclub, where Lamont Cranston meets Margot Lane.  It's a nicely designed set, art deco like much of the movie, and Alec 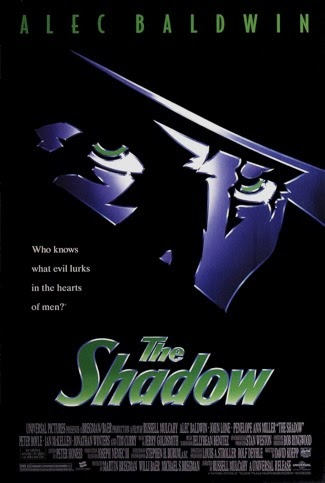 Baldwin is pulling off the mysterious-playboy thing reasonably well, and Penelope Anne Miller likewise with the femme fatale.  But as their Scene begins, the music, which up to this point had been a pleasantly old-fashioned big-strings score, switches to sub-David Sanborn smooth jazz.  Typical cheesy romance soundtrack circa 1994.

If the Shadow is a superhero, he's a very old-fashioned one - a generation before Superman and Batman, two or three before Spiderman.  Does he even have superpowers?  In some versions he can "cloud men's minds," achieving not just a degree of mind control but also invisibility;  that's the version the film follows, which certainly qualifies him.  But remember:  Batman doesn't have any superpowers.  Just a willingness to pose as a superhero, and the strength, tech, and craziness to pull it off.  Even if that's all the Shadow has, he still qualifies - but barely, because he's doing it in a pop-culture world that's just barely conceiving the superhero.  The Shadow is half superhero and half ordinary (extraordinary) crimefighter.  He's the pulp roots of the superhero.  With a nice touch of the noir - it's his own personal acquaintance with "the evil that lurks in the hearts of men" that gives him his power.  He's a reformed sinner, and so he knows how to deal with sinners.

Does the film get that?  Not really.  It's light and frothy and superficial, and it only barely nods in the direction of the evil that lurks in the hearts of men.  It's not interested in really plumbing the depths, really exploring the darkness.  It's content to give us a twinkly-eyed head-fake in the direction of the darkness, while really putting its energy into the shiny surfaces of the pulp's action orientation.

Rather than bring the "evil that lurks in the hearts of men" to life in a way that would feel evil in the '90s, they make it a period piece, playing up the roaring-'20s style.  Giving jaundiced '90s viewers a look at darkness as imagined in a less cynical age - or darkness as a cynical age imagined a less cynical age imagined it.  In other words, I think the various holes and absurdities in the plot are meant to suggest a certain gonzo naīvete in the pulps, too:  if this is Genghis Khan's grandson (i.e., Mongolian, by way of a China-based empire), why is he in a sarcophagus sent from Tibet?  And why does it have a Latin inscription?  Et cetera.  The film is full of ridiculousness like that (another fave:  why does the Tim Curry character just happen to have a big tank handy that he can fill with water at a moment's notice to drown Alec Baldwin?  I mean, what other reason does he have for owning such a thing?), but I think we're supposed to enjoy all that as being evocative of the adventure-at-all-costs mentality of the pulps.

But you know, I can go along with that.  A movie that took the Shadow seriously would have been interesting, but a committed, well-done throwback could have been interesting too.  In fact, my gripe is that the movie doesn't go far enough.  It's not ready to go full-on weird period-piece - it also wants to be a big mainstream mid-'90s superhero blockbuster franchise-building film with the Slurpee cups and the Happy Meal toys and all that shit.  So it's not going to risk having Alec Baldwin and Penelope Anne Miller flirting to, say, "Begin the Beguine."  They're going to give us smoove jazz.

So it's too '90s steroidal to satisfy the pop-culture-antiquarian crowd, but of course, the popcorn-munching 15-year-old boy is just mystified.  Who the hell's the Shadow and why should I care? says he.
Posted by Tanuki at 11:30 PM No comments:

I hardly remembered Omoo at all, it turned out.  It left only a vague impression on me the first time
through.  I think, revisiting it, that in part that's because the book itself isn't as impressive as the first one.  Not as interesting a read, certainly;  not as vividly realized;  and not as passionate. 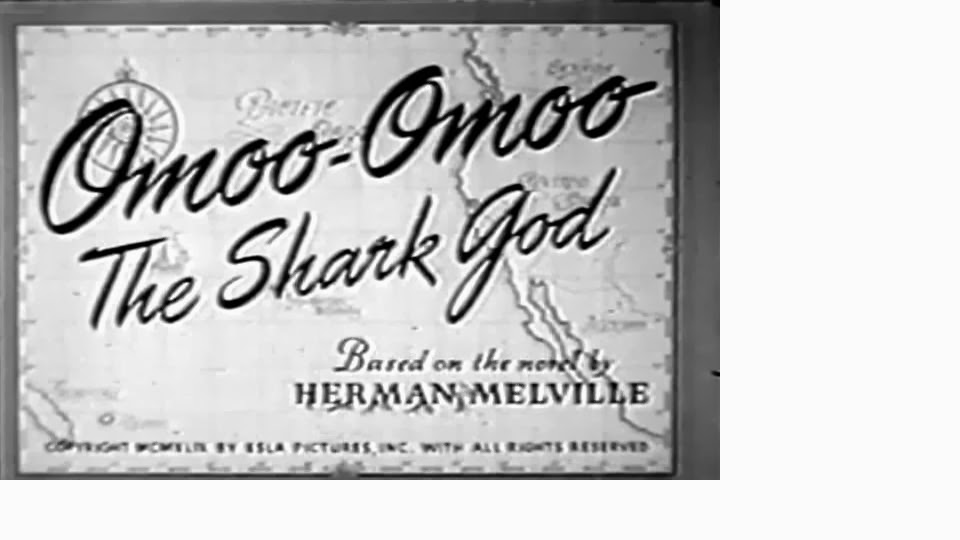 He's intending it, I think, as a mirror image of the first one.  If in the first one he's presenting himself as a disaffected castaway from Western civilization, willing and able to appreciate utopia among the cannibals, here he's presenting himself as cast out of that paradise, wandering the wastelands of civilization again.  The wholeness of purpose of the earlier book is replaced by an aimless fragmentation in the later.

Cast out of paradise.  Of course it's his choice:  he wants to leave the Typee valley.  That was always his intention.  But his stay drags on so long, and he writes of it in such luminous terms, that the reader is left to wonder if he really wants to leave (he=author, he=reader).  It's only his discovery that the Typees are, in fact, cannibals (and only in a limited, highly ceremonial, almost respectable way) that decides him to leave.  And this discovery is presented in a tone more tragic than horrific:  it's as if he's discovered that paradise has in fact no place for him.  Not that he's discovered paradise to be less than paradisiacal.

And so he goes a-wandering again.  Which is what the title of the second book means:  omoo=wander, he tells us.  But he goes wandering as someone deeply marked by his experience of paradise (in the second book he's even known as Typee, as if his knowledge of the place has made him part of it, even as he's cast out of it), someone with its perfection as a standard by which to judge civilization's imperfections.

For that's what the second book's about, no doubt.  He's still in the islands of the Pacific, in Tahiti most of the time, but he makes it clear that unlike Nukuhiva, these islands are far from untouched by Western civilization.  Most of them are under its political sway - Tahiti has just been usurped by the French, even as Nukuhiva itself had been as the earlier book got underway, but while he was able to escape the French to the Typee valley earlier, now there's no escape from them, no part of Tahiti that he can find that is unspoiled by Westerners.  And it's not just the French, of course:  he's constantly reminding us that British missionaries ruined Tahiti first, and that the Americans are at this very moment ruining Hawaii.

And it's not even just the white man's baleful influence on the Polynesians that dismays him - although his fervor in denouncing that is one of the book's saving graces.  What white men do to each other is just as bad.  What was missing from the last book is present here, a detailed depiction of life aboard a whaler, and inasmuch as that's a microcosmic society, it pretty clearly represents a doomed, damned civilization.

That's all in there.  The conceptual framework is all in place, and on that level I find the book very satisfying.  But it's not as interesting to read.  Part of it might just be that Melville was rushed - the prose isn't as carefully balanced, as polished, as good as in the first book.  It reads like the work of an author in a hurry, or perhaps bored by his story.  But part of it might be the inevitable consequence of this framework, as conceived by this author.  To make this kind of disjointed, disenchanted narrative work would have required the talents of an author with a more consistent, committed comic touch than Melville has, and maybe a greater love of wandering.

It could be that he's holding back.  I've just started Mardi, and while I do expect it to get sloggy, as all reports agree it does, so far it reads like an author liberated - he's committed himself to the exhilaration of myth and deep thought.  The systematic nature of Typee (as much ethnography as narrative) may have satisfied that urge within him, and triggered the passionate writing therein;  maybe the decision to observe only in passing in Omoo, or to concentrate on narrative over analysis, left him bereft of true inspiration.
Posted by Tanuki at 8:23 PM No comments: