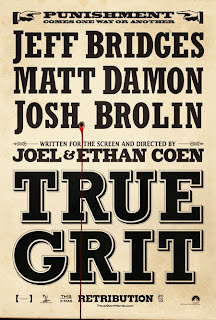 The line on the Coen Brothers' remake of True Grit seems to be that it's their first serious foray into genre filmmaking. I don't know about that; what was Miller's Crossing? But it is their first serious, full-blown Western: after, of course, a modern comic Western (Raising Arizona), a Western-inflected modern comic noir (The Big Lebowski), and a modern revisionist sorta Western (No Country For Old Men). Clearly it's something they've been leading up to for a long time, and I'm glad they finally took the plunge.

Because True Grit, it turns out, sorely needed a remaking. The original (which I confess I only just saw in preparation for the remake) is an iconic Western, but for all the wrong reasons. It's a perfect example of the late classic Western - i.e., before Clint Eastwood and Sergio Leone and Sam Peckinpah started shooting the place up. It has John Wayne in it, in all his unearned male-privilege swagger; it has unrepentant worship of out-of-control state violence to thumb the nose at dirty hippies (the original was made in 1969, don't forget); and it has the aspen glories of Colorado standing in for Arkanfuckingsas.

Worst of all, through becutesying and belittling Mattie, it has the gall to suggest that it's Rooster Cogburn who actually has the true grit. As if.

The Coens are too loyal to, or fascinated with, the myths of the Western to utterly jettison Cogburn's macho mystique, or utility; but they undercut it enough to put him in his place. That is, he's useful in a tight spot, not entirely useless otherwise, a gnarly mess of endearing and repellent traits; and, most importantly, he recognizes that it's Mattie who has the biggest and most cast-iron balls in the film.

That's only part of what I liked about it.

Another part is what the Coens did with the scenery. They keep the story in Arkansas, and Indian territory, and they don't glamorize it one bit. This is not the romantic Wild West, but a hard-bitten, scrubby Lower Midwest; it has its occasional prettiness, and a certain haunted spareness, but no aspens. The land their cameras give us is a perfect setting for the hard, matter-of-fact story they tell, in which there may be heroism, but not glory. And only occasionally what most of us would recognize as beauty. The major exception is, touchingly, during Cogburn's desperate ride to get Mattie to medical help: then, suddenly, the camera gives us lyrical views of a burning sunset, luminous frosty fields, endless starry skies. The West of legend.

Another thought. This is the second film in a row in which the Coens seem to be very interested in the idea of religion - in exploring a worldview (or even a world) entirely shaped by a particular religious outlook. In A Serious Man, of course, it was American Judaism of the late 1960s in the suburban upper Midwest. Here it's American Protestantism of the 1880s in the lower rural Midwest. Think about the opening of the film (their openings lately have been doozies): a dark screen, then a faint warm light in the middle that gradually comes to look like a cross seen through snow, but which, as it comes into full resolution, is revealed to be a saloon door in front of which a murder happens - a betrayal, as a man kills his master, a man to whom he is beholden.

And the language of Mattie's narration, and her whole way of dealing with the world, is all about debt, payment, tallies, contracts. The only thing free in this life, she says, is grace - and is there any of that in the film? Not until reality gives way to myth. Not until we come up, through the snow, to another doorway shining through the night, but this time with the possibility of salvation. And is this the same trading post where we've earlier seen Cogburn kick little Indian kids? Are we to imagine him begging for grace where he's previously shown none?

You know, I get the feeling that the Coen Brothers might only now be hitting their prime.
Posted by Tanuki at 11:48 PM No comments: 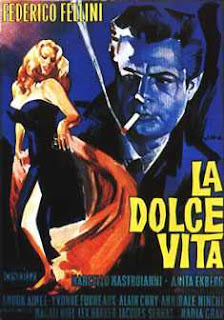 Midway (or a little more) through my life's journey, I saw La Dolce Vita. A good time to see it: in one's prime (if you can call this prime).

This film is too deep, too different from any I know much about, and too well known, for me to have anything useful to add about it. But, wow.

I'll just mention a couple of things that stopped me in my tracks.

One is that deathless opening. We see a helicopter carrying, suspended, a big statue of Jesus: flying past aqueducts, old Rome, then construction sites, new Rome, the statue's arms outstretched in benediction. Then the helicopter flies over some bathing beauties, and stops. Marcello, our protagonist, is on board, and his eye has been caught. Hovering there, dangling the Jesus over the girls, he tries to get a phone number. No dice. He smiles and flies on.

What a wonderful summation of the whole movie: immense, grand spiritual yearnings that nonetheless refuse to separate themselves from the pleasures of the flesh, with the result that neither category of desire is ever fully consummated. But no matter: on we fly, majestically.

The other scene is what Professor Wikipedia calls the "intermezzo." If the girl in this scene is an angel, then this must be heaven - it functions that way, as a brief mom

ent away from the moil of mortality, all tomorrow's parties*, a breathing-space where our protagonist can work on his art. And Fellini's camera makes it look like heaven - this beachside cafe, reed blinds for walls and ceiling, light and shadow in a luminous dappling. But what about our protagonist? Could it be any clearer that he doesn't belong here? He, and his coat on the chair, are the only spots of darkness in the scene.

*Rock nerd me was happy to notice Nico in a bit part. Appropriate casting, to be sure.
Posted by Tanuki at 10:51 PM 1 comment: