I found this link through Andrew Sullivan, detailing how Gallagher ('80s comic, smashed fruit on stage with a sledgehammer) has become not only a show-biz has-been (no surprise), but also a right-wing hatemonger of alarming proportions. It's sad, but more than that it's horrifying.

Was Gallagher like that back in the day? I remember quite vividly watching a number of his cable specials. (The author has it wrong, by the way: Comedy Central wasn't around in the '80s. Gallagher became known to kids like us through Showtime specials.) (We didn't have Showtime. I watched them at friends' houses.) But I don't remember the jokes: I just remember the watermelon-smashing.

And unlike the author of the otherwise-excellent article, I'm not too hip to admit that the watermelon-smashing was brilliant comedy. It had on me something of the same impact (pun...not exactly intended, but foreseen) that my elders describe Lenny Bruce as having on them. In the violent yet harmless act of smashing fruit on stage (best when done under strobe lights), Gallagher revealed something about our attraction to, even need for, mindless destruction; he said something about destruction as a form of creativity; and he provided a deeply cathartic and gloriously transgressive moment for those of us who, for better or worse, were growing up in an increasingly repressive (of everything except greed) America.

It was perhaps inevitable that it devolved into schtick. Lenny Bruce would have, too, had he lived. And it was inevitable that the idea would be stolen - in the interview Gallagher gripes about Letterman stealing it, but Letterman only steals from the best: it was a compliment. (My favorite iteration of it on Letterman was dropping a bathtub full of chocolate pudding from the roof of the Ed Sullivan Theatre, then following it with bowling balls.)

So Gallagher had his moment. What I don't remember (and I'm not sure I have the heart to search youtube enough to find out) is: was he this much of a racist, homophobic asshole back then, too?
Posted by Tanuki at 6:35 PM No comments: 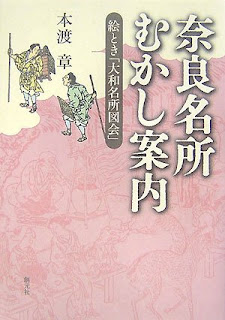 As I mentioned, one of the reasons we go back to Japan is to buy out bookstores, or come as close to it as our meager stash of cash will allow (which is, of course, not very close). And believe it or not I sometimes even read some of the stuff we buy; not always, but sometimes. I do enjoy books, and I do enjoy books in Japanese.

So within the first week after arriving this time around, immediately after finishing Pickwick, I had started four new books. Which is never good news for me, because try as I might I can't be in the middle of more than one book at a time (for pleasure reading, that is). I envy people who can be in the middle of three or four books at once, juggling them as the mood strikes them and reading all of them with adequate comprehension. I can't. So this time around I started a new book on Edo culture, Murakami Haruki's latest, another collection of Mizuki Shigeru's kappa manga, and this book, but before long this was the one I was carrying with me everywhere.

There was a big boom in gazetteers in the late Tokugawa period: travel guides, beautifully illustrated, with facts both for the traveler (where to eat, what to buy) and for the armchair traveler (how each place described figures in literature and history, notes on local customs and lore). I'm fascinated by these things, by the way - they provide pleasure on so many levels. There's the frisson of the familiar, as you feel yourself united with these people from far away and long ago in your shared experience of tourism; there's the comfort of the reference work, as these books organize knowledge in a pleasing, orderly format; then there's the art, which is
unfailingly beautiful. (Beholdmyswarthyface-san writes a little bit about a famous one for Edo here.)

The most famous of these guidebooks were written by Akisato Ritô 秋里離島 and illustrated by Takehara Shunchôsai 竹原春朝斎. One of their productions was a guide to the city of Nara and its environs, called Yamato (an old name for the region) meisho zue; it was published in 1791.

The book in question is sort of a beginner's guide to the Yamato meisho zue. Rather than simply transcribing and annotating the original (which would be fairly long and difficult for modern readers), he selects thirty of the most interesting illustrations and writes about them, describing what they show, with quotations from the original. Clearly it was published as a way of tying the ongoing Edo boom to the boomlet in Nara stuff that is coinciding with the 1300th anniversary of the city.

And hey, that's what hooked me. I saw it in the museum shop at Narahaku and had to have it.

Is it any good? Sort of. As the above description suggests, it's really neither fish nor fowl. The scholar in me would have preferred a straight transcription - Hondo doesn't quote nearly enough from the original, preferring instead to mix quotes from the original with his own summary of the significance of each place. He's trying to make it function as both a guide to what Edo people thought of Nara and environs and a guidebook for moderns in its own right. But I have plenty of modern guidebooks, so I would have preferred this to focus solely on the earlier view. And as a modern guidebook, of course it's not very useful either - no maps, for one thing.

That said, it's easy to read, and the illustrations themselves are just wonderful. Wisely, Hondo includes selections from both the birds' eye views with which Akisato and Takehara introduce each place and the close-ups of various scenes from ancient legend and current custom. My favorite is the rock divers of Miyataki. This was a stretch of rough water in Yoshino where local guys would do trick-dives for the tourists, who would throw them money. The picture is amazing. Dig the guy doing a back-flip in the middle, and the t 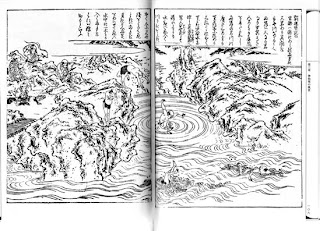 This was a good companion to keep with me during our trek around Nara. As an Edoist by vocation and an Edoite by avocation I found it a good way to personalize the trip, so I didn't feel like a total third wheel tagging along while the ancient-studies person in the family saw stuff she understands.
Posted by Tanuki at 6:46 PM No comments: