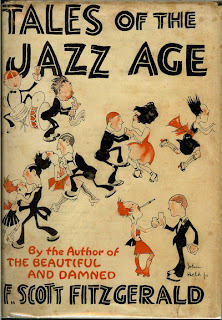 This is more like it:  more what I expected from Fitzgerald's famous flapper period.  The first four stories, at least - the ones grouped as "My Last Flappers."  They keep the promise, deftly evoking a society on edge, a society being stretched and frayed by the mystifying energies of young women ducking away from their handlers and the nearly beat cynicism of the young men who can't catch them either.  Yes he's still objectifying the women, still making them vessels of everything but their own humanity, but at least he's doing it wholeheartedly this time.

The first four stories are easily the best in the volume, though.  "May Day," in fact, is one of the best things I've read in all of Fitzgerald so far.  Its successful evocation of various levels of society - the way it evokes, or maybe just fakes, empathy for the downtrodden as well as the downtreaders - certainly foreshadows Gatsby, but the limited temporal and physical setting of it give it a dramatic unity and therefore intensity all its own.

The rest of the stories are real hit and miss.  Some inane comedy pieces ("Mr. Icky" and "Jemina"), some sophomoric trick pieces ("Tarquin of Cheapside" and "O Russet Witch!"), and some clearly major but rather off-putting fantasies.  "Benjamin Button" (never seen the film, so don't ask) and "The Diamond As Big As The Ritz" are the latter.  I didn't think much of "Benjamin Button" one way or the other, but "Diamond" was interesting.

Interesting for obvious reasons - it's a vividly told parable of something - but also disturbing.  It forced me to confront something that I've found increasingly hard to ignore as I make my way through early Fitzgerald.  His racial attitudes.  In "Diamond" the problematic idea is that this Shangri-la is based on the labor of slaves who were never freed after the Civil War.  Certainly we're not meant to see this as unproblematic, and I guess you could make a point that Fitzgerald was being exceptionally clear-eyed about race by admitting that a certain kind of white paradise could only be built on the stolen freedom of blacks.  But I'm not sure that's his intent either.  I'm sure he thinks he's being a little bit daring by imagining this, but I don't know that he thinks he's exposing the heart of American darkness either, although I think that's what he's doing in effect.  That is, the Peach Blossom Spring that he invents in the Rockies works perfectly as a metaphor for the antebellum South, or the society that the Lost Causers want to bring back:  a place whose wealth is entirely bound up with the existence of an enslaved class, a system that by its very backwardness calls forth other relics of behavior - the vaguely Oriental (in the oldest sense, the one followed by "despot") air about the place plugs in here.  That's how the thing works, I say, but I worry that Fitzgerald isn't as horrified by this vision as we might be today.  (As I am, and as I hope you are.)

I worry because although I never noticed it in Gatsby (is it there?), I've noticed in these early works Fitzgerald often taking a very cavalier attitude toward race.  Portraying black characters in essentialist way, having white characters talk about them in racist ways, evincing a nostalgia for the Confederacy, buying into the whole myth of Southern chivalry and Northern barbarism.  Well:  Fitzgerald may be no more than a victim of his times.  But when Tom Buchanan says things like this in Gatsby, I'm accustomed to being horrified, to seeing him as a bad guy, and therefore Fitzgerald as being more enlightened than his times.  But maybe not.
Posted by Tanuki at 11:11 PM No comments: 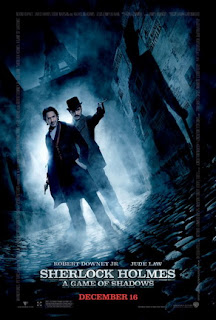 We made what seems to be turning into our annual trip to the multiplex a couple of weeks ago.  It wasn't really worth it.  We saw Sherlock Holmes: A Game of Shadows.  Meh.

So I'm on record as having rather liked the first one of these.  I don't take that back;  we watched it again recently and felt about the same way.  Which is why we dragged our sorry asses to the multiplex.

This one isn't as good.  Predictably.  As seems (the missus reminds me) to be the way with sequels, this is a case of the same, only lighter.  The brooding quality that helped make the first one palatable is replaced here by a kind of Indy Jones-ish Spirit of Adventure.  It adds up to no more than a goof, and it's pretty fun at that, but as the darkness blows away it reveals some of the weaknesses in Ritchie's approach.

Like, he has absolutely no use for female characters.  Which makes one realize:  oh, yeah, this is basically a lad movie.  Facepalm time:  suddenly I can see the pitch meeting.  "We'll take Holmes and Watson, 'cause they're already a buddy movie, and make it a lad buddy movie.  Cigars and gambling and boxing and shit."  Of course it's knowing about it:  they're winking and nodding at you the whole time, Ritchie and co. are.  That doesn't save it, of course, but it does ameliorate things a bit.

All of which is to say that, if you liked the first one, you'll probably like this one too.  Not as much, but then you didn't expect to, did you?
Posted by Tanuki at 11:19 PM 1 comment:

Gawd was this awful.  When a friend first sent us the youtube of the opening sketch (the "Dream of the '90s" bit), we thought it was great.  Portland really does feel like the '90s never ended.

But that's all the series had to offer.  Maybe two or three other sketches, out of the six episodes, had anything sharp or witty to say about Portland;  most of the rest weren't talking about Portland at all, but about the kind of yuppie you can find anywhere in the country.

So, okay, maybe there's isn't enough Portland-specific comedy to fuel a show.  Fair enough.  And one or two of the general-yuppie bits were okay.  But mostly, this was a crashingly unfunny show.

And more than that, it was unfunny in a particular way that I long ago learned to loathe.  It's that particularly unctuous, odious Saturday Night Live brand of unfunny.  No surprise, considering Lorne Michaels bankrolled it and Fred Armisen stars in it.

What is the SNL brand of unfunny?  Taking a single gag and working it to death, repeating it endlessly in hopes of making it a new national catch phrase.  Cruel, smug humor.  Mistaking coked-up fratboy snark for wit.  Creating broad straw-man stereotypes and congratulating yourself on your trenchant social satire.  Congratulating yourself.  Having only two-thirds the material you need to fill your show.  Substituting uninspired improv for careful writing.  Misusing guest stars.  Thinking you're too cool to have to make an effort.

No, I guess it's not.  I guess you've also got "let's make fun of Japanese people because they talk funny and dress funny!"  Complete with Oriental gong.

Fuck me, this is a horrible show.
Posted by Tanuki at 12:08 AM No comments:

Email ThisBlogThis!Share to TwitterShare to FacebookShare to Pinterest
Labels: tv 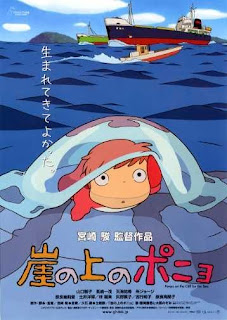 We saw this in the theater in Japan first-run, summer of 2008, and I had a blog post all composed in my head then, but never wrote it down, because we moved a few days later.

It was going to point out that it's a deeply flawed movie, with the Captain Nemo elements not jibing well at all with the Little Mermaid elements.  But it was going to concentrate on the fact that, despite those flaws, the movie taps into some really deep sense of awe about the sea.  The whole tsunami sequence, starting with the raging storm with little Ponyo running along on the crest of the waves and going up through the morning-after wonder of boating around on the glasslike surface of a submerged world, I found very moving and beautiful.  Miyazaki gets at something really primal there, some kind of atavistic worship of the sea and its power and its grace.  It lends Ponyo herself a kind of divine wildness that a post-adolescent mermaid might have lacked, and it powers the film way past the weaknesses in the story and, in particular, the ending.

That was more or less what I would have said.  Watching the film again now, though...  That's not what I felt.  It was hard to watch the tsunami.  For obvious reasons.  I wasn't even directly affected - all my relatives, and all their friends, were well out of harm's way.  But even so, tsunami are real to me now in a way that they weren't in 2008.  And I found myself thinking that Miyazaki probably wouldn't make this film now.  It's going to be quite a while before we feel quite that way about the sea again.

But then that makes me think that, while Japan hadn't experienced a devastating tsunami in many years before Sendai - so that Miyazaki might have felt the phenomenon remote enough to romanticize - the world had.  The Indonesian tsunami of 2004 was still fresh in people's minds when Miyazaki started this film.  Maybe he wasn't romanticizing tsunami from a position of remoteness, but trying to create for Japanese kids a kind of fairy-tale language with which to talk about tsunami, in preparation for a day when they'd have to.

Regardless, this film was difficult for me to enjoy this time.  The shots of Sosuke and his mom in the car, this close to being washed away, were too similar to things we saw in news from Sendai.

Yeah.  On an intellectual level, I think I understand how fairy-tales and folk-tales once fit into people's lives, speaking their unspeakable fears for them.  But I've never before felt it.
Posted by Tanuki at 10:07 AM No comments: