More with the deconstructing of the hardboiled hero.  For an author who basically invented the genre, Hammett spends an awful lot of time uninventing it.  To his everlasting credit, I hasten to add. 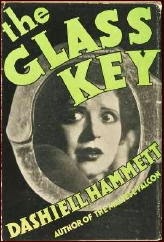 This time the protagonist, Ned Beaumont, isn't a private eye.  This can't be emphasized enough:  he's not a private eye.  I say this can't be emphasized enough because he acts like a private eye in a Dashiell Hammett book.  He solves the case, of course, but even before he does that he runs around doing the things a Hammett private eye does in order to solve a case.  Has run-ins with thugs and dames, turns up clues, steps lightly around cops, consorts with known criminals.  Gets the crap beat out of him.  Drinks alone.  Plays it close to the vest.

But he's not a private eye.  He's a political op, not a Continental one:  the right-hand man of the boss of an old-time political machine in an unnamed Eastern city that's not New York.  A boss who may well have committed the murder that's at the heart of this story, the mystery Ned's trying to solve.

Except - and here's the kicker - maybe he's not trying to solve it.  We never know, not until very close to the end.  The murder happens, Ned finds the body, Ned warns his boss that it looks bad for him, and then Ned spends the rest of the book running around doing the things a private eye does.  Except that we're not sure if he's trying to aid the investigation or hinder it, solve the murder or keep it from being solved.  He gets himself deputized to the D.A.'s office, but maybe he's trying to keep the cops looking in the wrong direction, away from his boss.  He's loyal to his boss - that's never (or seldom) in doubt (but then, watch that ending) - but we don't know if that loyalty extends to believing he didn't do it, or in fact means assuming he did do it and not caring.  In fact it's a distinct possibility for much of the book (and at one point it becomes a near certainty) that he doesn't want to know who did it, and just wants to gum things up so that nobody ever knows.

And yet it reads like a detective story, because like I say, Ned acts like a private eye.  In every respect except for that one niggling detail that he may not be trying to solve the crime.  And how much does it say, and about what, that trying to expose the truth and trying to cover it up end up looking like the same thing?

Was Dashiell Hammett the best novelist of his generation?
Posted by Tanuki at 9:50 AM No comments:

I hate the idea of Hemingway.  You know the famous Nabokov quote:  "As to Hemingway, I read him for the first time in the early ‘forties, something about bells, balls and bulls, and loathed it."  That's how I feel.  I hate that kind of macho bullshit, always have.

On the other hand I've always suspected, or feared, that I was doing him - or maybe just myself - an injustice in feeling that way, because I've never really given him a good solid read.  Read a couple of his books in college and they didn't leave any impression, but I was going through some shit then where nothing left an impression.  So I've always meant to go back to him.  Now, fresh off a Fitzgerald kick, seemed as good a time as any.  I'm starting at the beginning and I'll work my way forward until I can't stand any more.

For about the first half of this book I was on board.  I really like, for example, the trick of alternating fully-developed short stories with descriptive fragments, taken as if from soldiers' diaries or letters.  It sets up a productive tension between the fragments and the stories - how does each set of experiences relate to the other? is it one set of experiences or many? - that goes a long way to fulfilling the promise of the title, that this book is going to say something definitive about its age, and those who lived through it.  It also gives the book a modernist experimental flavor that I don't remember from my other EH reading;  the fragmentation, the collage effect, reminds me of course of This Side of Paradise, and I find it interesting that both writers started off experimental and became more conventional almost immediately.

The style, though.  That famous Hemingway style.  It's a stumbling block for me.  I can appreciate it - did like it for the first half of the book or so.  It is refreshing at first, even this many decades after it became canonical;  and it is effective at suggesting restraint, shell-shock, strong feeling, numbness, any number of things.  But after a while it begins to feel maybe even more pretentious, more bombastic, more contrived than the ornate older styles against which it was reacting.  By the time I got to "Big Two-Hearted River" I was rolling my eyes.

But then I started reading online criticism of the book - and I regret to say I didn't bookmark what I read, so I can't link to it - I don't remember where or what it was - but maybe that's part of my point, that Hemingway has become ubiquitous, and for good reason - I remembered struggling through this very story in high school and struggling with the idea of literary symbolism.  You know, what is it, how do you know this is a symbol of that and not of this other thing and aren't you just pulling it out of your ass anyway, all those things you have to work through when you're first learning to read in a literary way.  It's a good story for that;  the iceberg theory and all.  And I can't argue that this story doesn't do that:  doesn't suggest great trauma, great crisis, beneath a placid surface.  I have to respect it.

So we went to the Eugene Opera again last night.  Last NYE it was Pirates of Penzance, this time it

As a time, as a way to spend New Year's Eve, it was just as delightful as last year.  Again with the Eugenisms:  I'm not sure quite how many places you could go to see opera and catch the distinct aroma of weed from the elderly couple next to you in line.  The elderly couple who look - braids and ratty green cape, and that's on him - like they just tooled down from their commune in the hills.  Some might roll their eyes at this.  I think it's great.  In Eugene, the aging hippies support their local opera company.  Why the fuck not?

So, you know, serious opera.  My first.  It was fine.  Not scary or intimidating at all.  Okay, the near-contact high may have helped, but more than that:  it was music.  I'm a firm believer in the Ellington Doctrine that there's only two kinds of music.  And this was the good kind.

I hardly need to say that I'm in no position to judge the quality of the performance.  Beyond the obvious, that is:  the main roles went to pros from out of town, and that was as it should be, because the chorus seems to have been mostly local talent, and even I could tell it was weak.  The gypsy girls' song in Act II was, um, underwhelming.

As for the main roles, though, all I can say is that I really enjoyed Leah Partridge as Violetta, and really really enjoyed Jake Gardner as Giorgio Germont.  It was satisfying music.  Beyond that...

Beyond that, as a lifelong pop music junkie but a babe in the woods of the high-art shit, I was mainly just trying to pay attention and see if I could get how this musical entertainment was working at all.  And what I came away from it was a sense of how direct it all was.  Infinite subtleties in the composition and the performance, but as theater it's essentially melodrama.  Now you're going to exult, now you're going to fear, now you're going to weep, and when you weep you're going to really, really weep.  As a kabuki fan it was all perfectly recognizable to me as high and respectable melodrama.  A tonic for an ironic age.
Posted by Tanuki at 11:43 PM 1 comment: